“A Conversation with PV Rajagopal” by Subir Sinha

“A Conversation with PV Rajagopal” by Subir Sinha 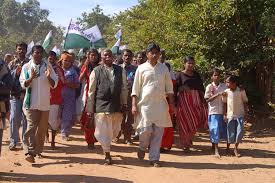 PV Rajagopal is associated with the Ekta Parishad, the largest Gandhian non-violent movement for land rights in India today.

The levels of deprivation of the rural poor in India are truly shocking. Their key livelihood resources, such as land, forest and water, have been steadily transferred to national and multinational corporations, sometimes by force. I have written up to 70 letters to the Prime Minister and have undertaken 1-year long padyatras to highlight this issue.

In my experience of dealing with the government, I have felt that there is great insensitivity among bureaucrats regarding the livelihoods problems being faced by the rural poor. I often wonder about the role of our universities and colleges in producing such people, where people with higher education degrees remain completely uneducated and unaware of the lives of the majority of Indians, and thus insensitivity to their plight.

This comes in the way of people’s right to voice their opinions on land acquisition. For example, the ‘jan sunwayis’ (popular hearing) on land acquisition are not held but are shown in the records as having been held. Police stop opponents of transfer of land to corporations from speaking in meetings. Bureaucrats and police officers work for private, not public interests. They may consider their own future employment, or those of their children.

Violence in evicting people from the land is a growing area of employment. One Haryana company brought in 3000 youth to provide muscle power. We found that they had been given a motorbike, a mobile phone and Rs 20000 each to beat tribals and to force them to sign on to the sale. Those who refused were implicated in false police cases. The company got 5000 acres. As Advasis do not have land titles, and their land claims are based on tradition and custom, they got no compensation. This led them to migrate to slums in the cities, much as in Brazil and elsewhere in the developing world.

In India, dalits make up 20% of the population, and never had ownership of land. They work as landless labourers. Once the land has been acquired, where do they go? 8% are adivasis, who are losing land to mining, manufacturing and tourism industries. Where do they go? 11% are nomads, whose commons are going, occupied by companies. 2% are fisherfolk, who are losing their fishing grounds to nuclear plants, ports, and other development. Violence and suicide are now common experiences among this 43% of India’s population.

The Ekta Parishad has tried to address these factors that challenge the livelihoods of the rural poor. It is among 800 such movements, which includes Gandhians, Marxists, and Ambedkarite groups as well. Yes, coalition building is difficult, but working together is necessary. We find Gandhi still relevant and important in today’s context. For example, his suggestion that we think of the poorest and the weakest, and consider whether our actions will empower them. We keep in mind his statement that there is ‘enough for everyone’s need but not enough for everyone’s greed’ when we see how need and greed battle it out in India’s development model. That is why we favour a need-based development model, not mass production but production by masses.

Our main method of generating public support and awareness is through our popular assemblies. We had a march of 25,000 people in 2007, and of 50000 in 2012. Even though the dialogue with the minister failed the first time around, we were able to get him to agree to our charter of demands in Agra in 2012. And we can count a number of important achievements. While the Forest Rights Act was passed in 2006, we were able to add a number of amendments in 2007. 3.2 million people were given land. What we have campaigned for, in addition to passing new laws or amendments to the law, is for existing laws to be implemented.

Today we are campaigning for a Homestead Land Act, as 40 million people in India have no land to make a simple homestead. We have been campaigning for the Ministry of Rural Development to take this up. Following from the Forest Act in which new land titles were given jointly to men and women (husband and wife), we are campaigning for a national land reforms policy under which women can become land title holders. We are also asking for mechanisms to speedily and justly deal with disputes over land acquisition, involving the forest department, the revenue department, indigenous people and corporations. In one case in Kerala, for example, a company was in illegal occupation of 56,000 acres of tribal lands, and it had such deep pockets that it kept delaying the legal process through which its control over this land was being challenged.

The coming of the Modi government to power has created a new set of challenges. For example, Modi’s matra of ‘Make in India’ invites foreign direct investors to invest in land, it is in effect an invest-based development model. Its overall direction is pro-middle classes and pro-corporate. But we do have some opening too.  In Madhya Pradesh, the current Minister for Tribal Affairs joined our march in 2007, and the BJP Chief Minister has listened to our demand and given land to 36000 people.

Is it possible to give land for millions of people in a country with a population of 1.2 billion? Compared to Africa and Latin America, India does not have ‘surplus’ land. So we are following 4 lines to campaign along. First, the retrieval of lost land, by which I refer to the fact that powerful people affiliated to all kinds of political parties have illegal possession of land, which we would like to be entered into the land pool. Second, the regularization of land, by which I mean giving people land on which they live. Sometimes we see multiple displacements, for example people displaced by dams, who then live on lands adjoining roads, from which they get evicted by some government agency like the Public Works Department. Then they might move to someone’s private land, and get evicted from there as well. Third, land reforms. If land given to private entities is not being used for that purpose, then that land should come back to the pool. And finally, protection: do not evict in the first place.