All Data Is In. We Have Interesting News.

Home/project results and findings, Uncategorized/All Data Is In. We Have Interesting News.

All Data Is In. We Have Interesting News.

I’ve been closing my part of the REALM project over the past month. Now I will be posting highlights from the results. Anyone who works in migration can approach me if they need more details, and you can see the bigger REALM website for details of other projects on this collaborative initiative.

My project – ‘The Paradox of the Gulf as a Space of Freedom and Aspiration’, grew out of things I’d been hearing for several years, and wanted to ask people about in a more systematic and in-depth way.

As I am a social anthropologist, my project was small-scale ethnographic and aimed to work with around 45 migrant respondents, split between those aged over 50 who had been in Gulf, and also among younger current migrants and aspiring migrants.

I also had plans to work in 2 fieldsites where I have longstanding connections – Calicut / Kozhikode town and Maveilikkara area. This allows me to work with both new and also with very long term respondents (LTR) – who often offer franker opinions and richer material.  I’ve been following the lives of some of these LTR since 1989. You can find my past work via ORCID or good old Google Scholar. 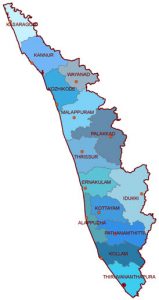 Districts of Kerala. Calicut / Kozhikode is in northern Malabar, while Maveilikkara is in Alappuzha, southern side Travanvore. Mattancherry is in the centre, in Ernakulam.

In the end, it was difficult to trace enough retired migrants in Mavelikkara who wanted to engage. I also got the chance to add in a 3rd site – Mattancherry, in Cochin.  And I had to abandon plans to limit migrants to those who had been in my ‘target’ areas – Ruwi, Muscat, Oman;  Electra / Hamdan, Abu Dhabi, UAE; and Marmora, Ras al Khaimah, UAE. When you work ethnographically, and when you are doing much of the work in India itself, people present themselves, snowballing happens, and an ethnographer is not going to say – “Sorry, I don’t want to hear your story of life in Saudi”.

Such are the ups and downs of ethnographic work.

As a planned 45 interviews and interactions turned into 84, the stories grew more complex and my sense of what was happening developed more nuance.

Some of the project findings have confirmed hunches from earlier fieldwork (you can call them hypotheses if you want, but if you know how ethnography works, you know it’s often far looser, born from ground-up practical and experiential reasoning).

Some findings have been unexpected – sometimes spectacularly so.

Over the next month, I’ll release posts on specific findings. Stick with us.