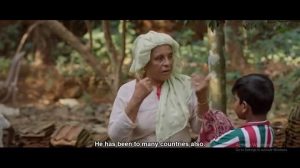 Umma from Malayalam film ‘Sudani from Nigeria’ speaks about the artificiality and historical shallowness of the ‘passport’ / ‘border’ concept.

Kerala movies used to be known around India for having a non-commercial artsy stream. But to be honest, when I first visited the state in the late 80s and asked people about these films, nobody in my circles had seen them – or even heard of them. Movies from directors like Adoor Gopalakrishnan were clearly part of an elite movement of intellectuals and artists. The Malayalis I knew enjoyed mainstream comedies, thrillers and romances and, of course, family melodramas, which featured mega superstar actors and stock character jokers (and hardly any space for women, who appeared in minor roles as foils to the heroic escapades of menfolk).

Several academics have written about how Malayalam films worked to maintain conservative gender norms and sexual double-standard. Co-researcher Filippo and I wrote a while back about the ways in which the megastars – with their organised fan-clubs, orchestrated hero-worship and personal mythologies – attracted and affected young men.

Firstly, we’ve witnessed a series of scandals (with the usual roots -power, violence, money, sex, privilege) rocking the Malayalam cinema world and some frank revelations and resistance to the old practices. If you want to read about some of this unsavoury recent history, here’s some links to follow through. A case involving superstar Dileep opened the box for some impassioned speaking-out withing the industry and for trouble within AMMA, the Malayalam film actors association.

But secondly, and in complete contrast to the sleaze and entrenched power and privilege which the Dileep case brought into the open, we have a positive new movement growing. Some younger directors and writers are pursuing original and highly contemporary themes, using fresh and relatively unknown actors and bringing in great movies at budgets a fraction of the mainstream. Directors include Anwar Rasheed, Anjali Menon,Lijo Pellissery and KR Manoj; key films include Bangalore Days, Angamali Diaries and Ustad Hotel. These movies have a quiet realism and no superstar macho heroes. These films give the voices and stories of women and young people some space, breaking up the gridlock of patriarchal family drama / hyper-masculine heroic fantasy.

One recent movie is ‘Sudani from Nigeria‘, from fresh upcoming writing team Zakariya and Muhsin Parari, and directed by Zakariya. The title itself makes knowing allusion to the way that, in most of Kerala, ‘Africa is a country‘ – in which ‘Sudani’ becomes metonymic shorthand for any ‘African’ identity. (But do see this site too, for more on the ‘Africa as a country’ question from an insider and nuanced perspective).

After watching this excellent and poignant tale of a Nigerian footballer who is hired to play in a Kerala team, (the role taken by Samuel Abioloa Robinson), a couple of things are striking me as I think through the movie. Firstly, it is exciting to see Malayalam movies reach out beyond the state and into global co-operation in production. This is a far cry from Bollywood dance scenes shot in Switzerland: this is genuine international engagement, even if there is still some struggle over terms and conditions with the paymasters. Secondly, the theme here is global, which carries this movie’s concerns with questions around passport, visa, and searches for livelihood several notches higher than the longstanding Malayalam film tradition of representing the struggles of Kerala Gulf migration.

I cannot help but wonder if this film could have come from anywhere else in India but a Malabari team. With a history of international links which stretches way beyond the recent oil boom, this region of Kerala transcends all parochialism or narrow and historically recent nationalisms.

Can it also be that Malabar’s ‘migration culture’ is a base for moving outwards, beyond the self and towards thinking about bigger pictures? Is a society with a migration culture better placed to get over itself, and develop a global consciousness? (Studies of the cultural crossings among California’s Mexican-Punjabi community are interesting here). What roles can artists and entertainers have in stepping into these global issues?

An old Mapilla Muslim mother is one of the film’s strong characters, and she delivers a heartfelt speech (when Samuel the Nigerian footballer loses his passport and legal repercussions threaten). I’d like to leave this speech here for us to think about, in this historically amnesiac moment where borders and nationalisms are being made to seem natural and longstanding, with those who transgress them being painted with immorality and criminality. 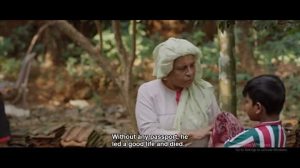 Without ever having had a passport, he travelled all over, lived a good life, was a good man, and died as a good man.