In the recent BBC One documentary ‘Last Whites of the East End’ one participant outlined the reasons for why she would be unhappy if her child came home with a non-white partner. Amy Oakman said, “You see it on Eastenders with the Masoods […] I can’t think of the storyline now but they did bring a white girl home and Masood was going mental.” Masood is the father of the first Muslim family in the long running popular soap opera Eastenders. This fictional character serves as the point of social reference for Oakman: she believes she has the right to object to an ‘interracial’ relationship in an effort to preserve her cultural heritage because Muslims on television like Masood, do so too.

Her comments throw into sharp relief the constitutive power of hostile  media representations of Muslims and how they contribute to the production of opposing and antagonistic local and national identities evident in the ‘Last Whites of the East End’. Unsurprisingly, the question of how Muslims are represented in the media has become a source of enduring discussion in recent times with many asking the question of how this can be addressed to provide a more balanced view. However, what television producers must understand is how these (mis)representations serve wider political functions in UK politics and that the demonisation of Muslims is not merely the product of ‘negative stereotyping’.

‘The Last Whites of the East End’ is instructive in this sense. Shot in the ‘super diverse’ London borough of Newham, home to the second largest Muslim population in the UK, the documentary reveals the political function played by the (mis)representation of Muslims. The BBC bills the documentary as an examination of ‘a tight-knit white working-class community who have lived there for centuries. But over the past 15 years something extraordinary has happened to this cockney tribe – more than half of them have disappeared. Now the few who remain are struggling to hold on to their identity in the place they have always called home.’ An hour’s worth of footage is replete with references to ‘our identity’, ‘our way of life’ and ‘our own kind’. Participants were unhappy about how white working class East End life was disappearing because of the influx of specifically  Muslim immigrants who are accused of ‘sticking together’ and not wanting to be part of traditions. Within this overarching context, appeal of the Muslim bogey man is unsurprising. Participants also spoke about local unemployment, the dissolution of community ties, and failing infrastructure. These long-term social changes experienced by white working class communities across the UK are being made comprehensible and manageable by locating their causes and symptoms, at least partially, onto Muslims.

The depiction of Muslims as murderous fathers, religious fanatics, or as a wholesale subversive force on television is then decidedly political and linked to broader structural tendencies noted above. In short, this is not simply a case of misrepresentation or negative stereotyping of Muslims but an exercise in power which asserts the very conditions of possibility upon which Muslim representation can be articulated. The idea of Muslims as alien others who present a preeminent challenge to the security of UK citizens lives and to their cultural identities is sustained by popular representations but also determines the representations that are possible. Muslims are caught in a double bind where their loyalty to the UK is constantly called into question and thus they can occupy one of two spaces: terrorist or non-terrorist. Good Muslim or Bad Muslim. This cannot be ‘corrected’ by producing benign or ‘friendly’ images of Muslims as is the attempt with strangely dated BBC sitcom Citizen Khan. Even Nadiya Hussain, winner of the Great British Bake Off, an emblem of multicultural success has been subjected to Islamophobic abuse which she claims worsens after every terrorist attack. 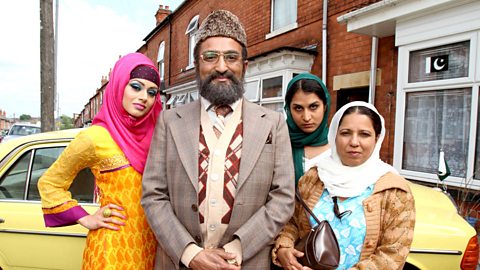 This view also complicates the desire to create an ‘accurate’ or at least a more pluralist image of Muslims in television as BBC’s diversity commissioner Fatima Salaria has argued for. Neither plurality nor representativeness will dislodge the good Muslim, bad Muslim dichotomy. Therefore, those who are frustrated with and wish to change depictions of Muslims as a monolith of terrorists, extremists, or the socially backward should recognise television as a political terrain. The struggle over how Muslims are represented and by whom is ultimately then a political struggle. The proliferation of Good Muslim characters or more Muslims won’t cut it: changing the discourse will. We need a national conversation regarding the social and political changes taking place in the UK and how Muslims have become the scapegoat for the anger, bewilderment and unhappiness people feel about this. The ‘Last Whites of the East End’ is a powerful testimony as to how urgently this debate is needed.