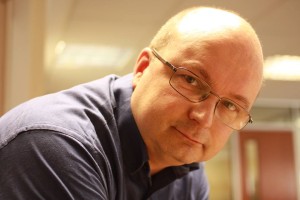 What’s in a word? A lively and sometimes heated debate, it seems, if that word is ‘SubhanAllah’ and it appears on London’s iconic red buses.

Islamic Relief is advertising on 180 buses in London this Ramadan, as well as 460 more in Manchester, Bradford, Leicester and our home city of Birmingham. The advertisements encourage supporters to ‘gather the rewards of Ramadan’ by giving generously. They also proclaim ‘SubhanAllah’ in decorative script – declaring glory to God both for the opportunity to do good in this most blessed of months, and for the generosity that has enabled Islamic Relief to assist over 100 million people in its 32-year history.

We chose bus advertising in cities with large Muslim populations partly because this is a very cost-effective way for our fundraising appeal to be noticed in the Muslim community. In London alone it is estimated that our message will be seen by over 10 million people.

We also wanted to secure these big, red mobile billboards to engage with a wider public and create a talking point. We wanted to draw attention to an aspect of Ramadan that is not widely reported and appreciated – the extraordinary generosity of the British Muslim community in charitable giving. 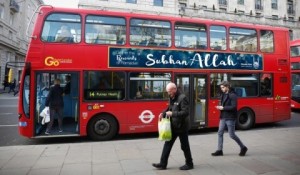 Our own research into this area two years ago found that British Muslims give over £100 million in Ramadan to Muslim international aid charities alone. The real figure for charitable giving may even be double that amount, once giving to non-Muslim oganisations and charities that operate solely in the UK is added.

Despite this generosity, too much of what we see and hear in the media about Muslims is negative. There is also a lot of negativity in some media around international aid – something we want to challenge and change.

There will be a debate in parliament on June 13 about whether the UK should stick to its pledge to spend 7 pence in every £10 of national income on international aid. Islamic Relief believes passionately that we have a duty to support those less fortunate, and we declare ‘SubhanAllah’ for the progress that has been made on this front. In the past 15 years extreme poverty has been halved, while numbers of children dying before their fifth birthday have been cut by a third.

We did not expect to attract quite so much attention before the first ‘SubhanAllah’ bus had even appeared on the streets. Our plans have been reported by a wide range of media in the UK and around the world – 500 items of coverage so far, and still growing. For more than 24 hours Islamic Relief was trending as the Number One topic on Facebook in the UK, which is extraordinary.

From the Muslim community the response has been overwhelmingly positive. Many seem pleased, even proud, that a Muslim organisation is wearing its Islamic heart on its sleeve in such a positive way. A small minority have expressed concern that the campaign might inflame tensions or cause divisions in an already Islamophobic climate, but we are finding that the media debate is giving us a great platform to counter prejudices and communicate what Islamic Relief and the British Muslim community really stand for.

Some non-Muslims hear Islamic Relief’s name and assume either that we are a proselytising organisation, or that we are concerned solely with Muslims helping their own. We have been able to challenge these prejudices. Islamic Relief is a purely humanitarian organisation and assists people of all faiths and none – people in need are the people who count.

It has been suggested in some quarters that advertising on buses in London has given Islamic Relief a privilege denied to some Christian organisations. But we have to abide by the same regulations as everybody else. A Core Issues Trust advertisement that is sometimes mentioned in this context was banned not because it was devised by a Christian organisation but because the language it used was thought likely to cause serious offence to gay people.

Islamic Relief advertising at Ramadan is similar to a charity like Christian Aid advertising at Christmas. The word ‘SubhanAllah’ is an expression of thanks and praise that has entered into the everyday language of British Muslims, much as ‘Hallelujah’ is common parlance among Christians.

The core of our work is charity and empowerment – supporting people to lift themselves out of poverty. We never cease to be amazed at the resourcefulness and resilience of the communities that it is our privilege to serve.

Our sincere hope and prayer is that we may eventually be able to put ourselves out of a job by banishing poverty from the communities we work in for generations to come. That will be worth the loudest and heartiest ‘SubhanAllah’ of all.

Martin Cottingham joined Islamic Relief in 2011 as Media Relations Manager, and was appointed Head of Communications in 2015. He has helped Islamic Relief to increase its mainstream media profile and expand its campaigning work, producing hard-hitting advocacy reports on floods in Pakistan (2011), famine in Somalia (2012), disaster risk reduction (2013) and aid to Afghanistan (2014). He has over 20 years’ experience working in media, communications and marketing roles for international development and environmental charities.

Martin graduated from the University of London with a degree in English and Drama (1982-85), then trained as a journalist with a postgraduate diploma at City University (1986-87). He has previously worked for Christian Aid as Editor of Christian Aid News and Media Relations Manager (1988-97), for Oxfam as Regional Campaigns Manager (1997-2000) and at the Soil Association as Marketing Director (2001-2006). From 2006 to 2012 he worked for a wide range of organisations as a freelance writer, researcher and communications consultant, including the Environment Agency, the Forestry Commission, Forum for the Future, Christian Aid and Cafod. At Christian Aid he was responsible for a campaign that helped changed the law on child sex tourism, while at the Soil Association he helped develop the influential Food for Life school meals campaign.

In his spare time Martin helps run a children’s club and enjoys reading, cinema, walking, football and the natural world.