The World of Islam Festival was unprecedented in scale and participation; a dozen major exhibitions, held in the most prestigious venues including the British Museum, the British Library, the Victoria and Albert Museum, the Science Museum and the Hayward Gallery, assembled 6,000 manuscripts and objects from 250 public and private collections in 32 countries; a Quran recital held at the Royal Festival Hall; 20 concerts at the Queen Elizabeth Hall, Purcell Rooms and Horniman Museum; 23 seminars and over 100 lectures taking place in universities and learned societies; a series of 6 films produced, broadcast on the BBC twice during the Festival, and over 50 books published. A comprehensive press and media coverage ensured the Festival took up centre stage during the three months from April to June 1976 and received global attention. The Festival was inaugurated by Her Majesty the Queen, and the Quran Exhibition was opened by His Eminence the Sheikh Al Azhar.

Since the 40th Anniversary event at SOAS I have been asked on several occasions if the Festival of 1976 could be done again today. I believe there are two critical differences between the UK of 1976 and the UK of today which preclude that possibility. The first is institutional. In the early 1970’s scholars in the universities, curators in the museums and librarians in the libraries ran the show. As a young man in his twenties I could ring up a curator or even the director of a national institution and within two weeks I could be sitting in front of him or her making my pitch. Scholars, curators and librarians had time to think and could take the initiative. It is incredible, looking back, to see how quickly during 1972 and early 1973, I was able to seed the projects which three years later produced the Festival. We were very fortunate as at that time there were outstanding officers at the Arts Council of Great Britain, which played a key coordinating role, leading to an unprecedented collaboration between the institutions. This was further fostered by the Festival Trust after it was set up in October 1973 to coordinate the whole Festival. The freedom that the institutions enjoyed allowed for an amazing manifestation of creativity which was further enhanced by the enthusiasm engendered in taking part in a great collaborative event.

During the last twenty to thirty years the way cultural and educational institutions are run has been completely changed. The corporate structure of business has been imposed upon them. This has spawned layers of management in an attempt to control everything, including the future by subjecting everything to “risk assessment”. Under this new regime, it is the god of the bottom line that rules. The scholars, curators and librarians cower under this growing and alien weight of administration. Time seems to have evaporated, and just getting an appointment to meet someone is a challenge. The distrust and fear that is endemic in the corporate world is now infecting the cultural and educational spheres. In such an environment it is hard to imagine how it would be possible to recreate the Festival of 1976.

The second reason that makes it impossible to envisage such an event taking place now, is the change in the political situation and the perception of Islam over the last forty years. In 1970, when the Festival was conceived, Islam was not an issue in the West. It was known that it was a religion, but the idea that there was a cultural world of Islam spreading from West Africa to China was non-existent. The world was divided between Arabs and Persians, Indians and Pakistanis, Malays and Indonesians, and was defined by the nation state. In early 1972, I approached the BBC with the proposal for a series of films on the world of Islam. They had enjoyed a global success with “Civilisation”, a 12 part series devised by Kenneth Clark, and were looking for ideas for the next blockbuster. My proposal, after careful consideration and several meetings, was turned down. The reason given was that there was no interest in the subject, nobody knew or cared about the world of Islam, it was a non-starter for television viewers. Instead they chose a series on British architecture. However, the reception from other major cultural and educational institutions was very positive. By the middle of 1973 the Festival had been deeply rooted in the institutions and was perceived as a cultural event of national importance that would be inaugurated by Her Majesty the Queen, who had already been pencilled in for the occasion. And then in October 1973 the price of oil quadrupled and the Festival Trust was able to raise the money required to create the most comprehensive event of its kind ever held in the West. 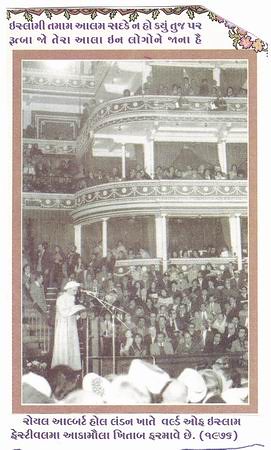 In the 1970’s we only had to deal with the residual historical prejudices which were attached to Islam and had faded to a large extent. The Festival came out of a blue sky, or as the Americans say from the left field. It was rooted in the cultural establishment, and supported by governments who did not affect the cultural programme because it was set by the time they became involved. In this auspicious environment we were able to present our vision of the beauty and unity of the cultural world of Islam. Today, global warming and Islamic terrorism are seen in the West as the two greatest crisis facing humanity. The world of Islam has been rent asunder. In 1976 there was little knowledge about the world of Islam, now it is permanently before the public, and images have been set in the imagination that are a terrible travesty of the glorious truth of Islam. In such an atmosphere of conflict and disintegration the World of Islam Festival of 1976 could not have been realised. Today, however, if we are to penetrate the thick layers of confusion, distortion and prejudice that swirl around Islam, we need an initiative that presents a far deeper and more illuminating understanding of the beauty and unity of Islam and its glorious cultural manifestation in history.

Ahmed Keeler was born in 1942 and christened Paul Godfrey. He was brought up during the 1940s and 50s in a conservative, upper middle-class, Anglo-Catholic family. He belonged to the last generation that was educated to serve an empire which, however, was in the final stages of dissolution. On leaving school he became deeply involved in the cultural movements of the 1960s that were in open revolt against the society that had nurtured him. A chance meeting with a master musician from India introduced him to a wonderful new cultural realm; in response he formulated and organized The World of Islam Festival that took place in London in 1976, was opened by Her Majesty the Queen, and was the most comprehensive exposition of Islamic culture ever to have taken place in the West. Six months before the festival opened he embraced Islam. He has spent his working life since the festival in establishing and engaging with projects that explore and present Islamic culture as a holistic environmental manifestation. Residing in Cambridge for the last 22 years he has had a profound impact on a number of students passing through the University. At a time of growing instability he is now lecturing and participating in seminars encouraging us to judge the success of human culture through the criteria of Mizan, which is at the heart of the Islamic unfolding.