Speaker’s Corner: Rotherham – on racism and accountability, by Muhbeen Hussain

Speaker’s Corner: Rotherham – on racism and accountability, by Muhbeen Hussain

Muhbeen Hussain is the Founding member and Chief Executive of the British Muslim Youth. He is a regular contributor in the media. Muhbeen writes in a personal capacity. 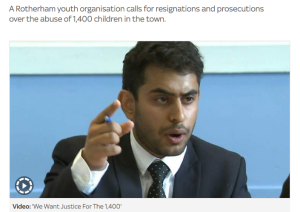 How did you come to hear about Rotherham?

As someone that was born and has lived most of my life in Rotherham, I remember traveling across the UK and struggling to explain to people where I was from. I would sometimes add in that the Chuckle Brothers are from Rotherham to make the town sound a little unique. Sadly, the days of humorous links are long gone. Now when I travel the country, or even sometimes throughout Europe I don’t have to explain that Rotherham is a small town situated next to Sheffield – instead I anticipate an awkward reaction.

The media frenzy over Rotherham mainly began in August 2014, when the Jay report revealed that 1400 girls in Rotherham had been sexually exploited by men of mainly Pakistani heritage. This week the first steps towards justice were taken when 6 individuals (4 Asian males, 2 white females) were sentenced to 102 years for 55 convictions relating to Child Sexual Exploitation (CSE).

A question that I often get asked and one that I was asked due to sloppy journalism, was in relation to the Pakistani community in Rotherham.  “How does the community feel after putting these girls through such horrors?” (Or some other similar phrase asking the same thing). Let it be made clear to sloppy journalists; and to the bigots that try to divide: what the victims of these vile crimes went through, and had to go through whilst giving evidence in court, reliving horrific moments throughout their lives is unimaginable and something I can never claim to comprehend. But the Pakistani community in Rotherham, those I meet, greet and have had extensive conversations with feel the same as everyone else within Rotherham, that their girls, the town’s girls have been completely failed. Not to mention that 110 victims from the 1400 were Pakistani girls, according to the research carried out by Apna Haq in Rotherham. We are completely clear that the individuals convicted are criminals and that these criminals didn’t have a moral code belonging to a particular community.

However, what we are not saying, is that we as a community are guilty, because we are not.

If the individuals are guilty, they are guilty; the jury hasn’t found the community guilty.

It is also very easy for people outside of Rotherham to point the blame out to everyone, but can anyone name a single town or city that has faced a similar situation and in which the ‘accused community’ has worked so proactively to denounce criminality and stand with victims, whilst being targeted by over a dozen far-right demonstrations, as well as a huge spike in hate crimes. Most recently, the murder of 81 year old Muhsin Ahmed, an innocent elderly man walking to morning prayers who was called a ‘groomer’ and beaten to death because he was ‘Asian’.

Thousands from the Pakistani community signed petitions against CSE and called for prosecutions even prior to the release of the Jay report. This community also came out in a collective rally led by the British Muslim Youth, denouncing these vile criminals as having no links to our community, and calling for them to be prosecuted.

Today, the reaction by members of this same community after these convictions is that more needs to be done. The Jay report highlights 1400 victims. To then have a mere 6 prosecutions is just not enough and we want to see more done, just as anyone else in and outside of Rotherham.

It was a pernicious lie that somehow the whole Pakistani community was aware of these criminals. Aren’t members of this community doctors, teachers and individuals that go about their daily lives unaware of what is going on a few doors down from their homes, just like most other people?

The sad reality is the victims weren’t believed then and we cannot allow the authorities to make the same mistake now.

Many of the victims have made it clear that people did know, the people in the social services and the South Yorkshire Police, the very people that were in place to deal with these cases. However, these very same victims often went to the police officers, who turned them away because they believed that these innocent girls were complicit in their abuse. Thus, I also urge the Independent Police Complaints Commission to ramp up their investigations of the 194 complaints regarding police dealings within these cases. 102 complaints have yet to even identify the officers involved. There was a culture of institutional failings that allowed the vile perpetrators to ruin the lives of innocent victims and those that failed to do their duty also need to be investigated and dealt with.

But there is one valid question that some may have. With all these years of problems and issues how will Rotherham ever move forward? Clearly, it’s hard to say, but I believe Rotherham will move forward, by supporting the victims, by prosecuting the criminals, by investigating and even prosecuting those in institutions that failed our town and by beating the racists that are trying to divide us. But we will stand united.