Political Commitment and the Theatre of the Global Refugee Forum: A Recap

Home/Uncategorized/Political Commitment and the Theatre of the Global Refugee Forum: A Recap

Political Commitment and the Theatre of the Global Refugee Forum: A Recap 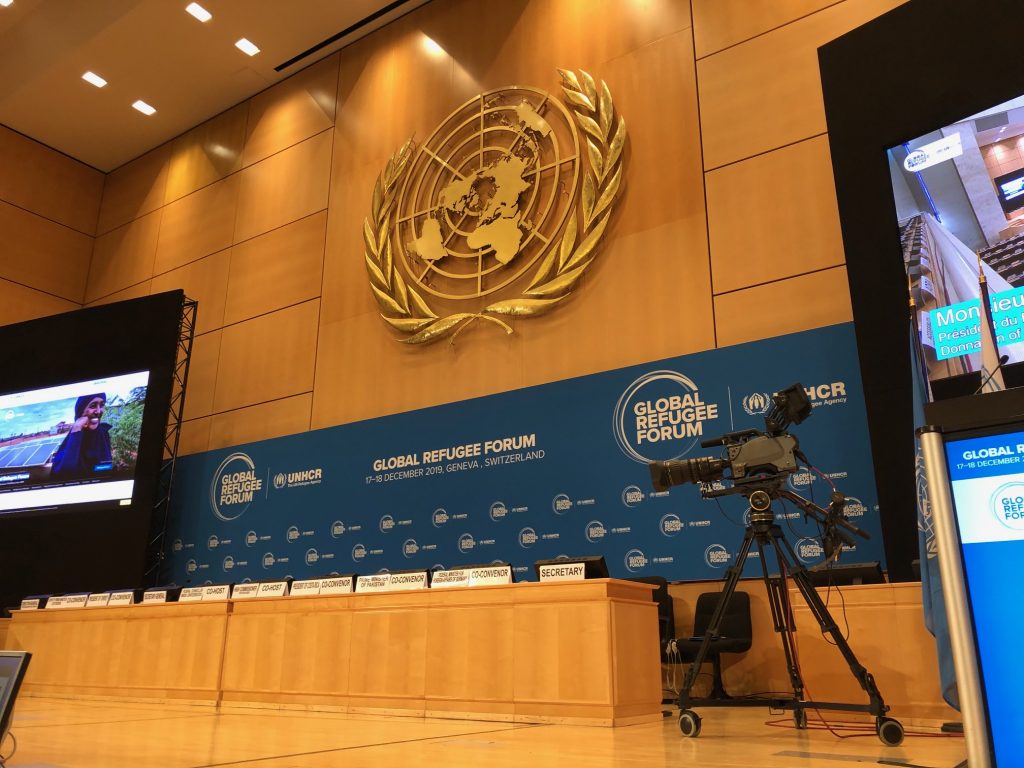 I’m just back from the first-ever Global Refugee Forum, a gathering of over 3000 government, UN, NGO, academic and refugee representatives, hosted by UNHCR in Geneva from 16-18 December  2019. It was a whirlwind, aimed at mobilising international support for the Global Compact on Refugees, which was signed a year ago. On that score, it was a success –UNHCR reported that 770 pledges had been been received totalling nearly $8 billion and including jobs, scholarships, and other forms of support.

A key element of the Global Compact on Refugees is the promotion of a ‘whole of society approach,’ supporting not only refugees, but those who are affected by refugee displacement – including host communities and returnees. For some countries, such as Somalia, the challenges of internal displacement also demand a coordinated response, as the Somalia Prime Minister Hassan Ali Khaire pointed out. So the focus then shifts away from discrete categories of people to displacement situations.

This is not necessarily a new idea – Uganda has been supporting displacement situations for a long time, and even earlier – in the 1980s – Central American countries pursued a ‘cross-mandate’ approach to responding to displacement that provided short and longer-term aid on the basis of need rather than category of displacement.

But what is new (and badly needed now) is a commitment to these kinds of approaches that supports people affected by protracted displacement and works towards finding solutions. Worldwide, reception towards migrants and refugees is becoming ever more frosty and hostile – with countries reducing their resettlement quotas and support for refugee programmes, some host countries seeking to close their borders or refugee camps to new arrivals, and the closing of space for many forms of safe and legal movement. So the fact that 150 country delegations, plus regional organisations, the World Bank, EU and other donors actually turned up was already a major success. There were well-publicised and controversial addresses from Turkish President Recep Tayyip Erdogan and Pakistan Prime Minister Imran Khan, which you can watch on the Forum video archive.

The sessions themselves – the pre-Forum day of side events and the two days of official Forum panels – were fairly wooden, with most speakers reading from prepared texts, not wanting to engage publicly in ad hoc discussions. So some of my academic colleagues were a bit disappointed at that, saying that they wished that there had been a more free flowing exchange of ideas. But such a view, I think, is based on a misreading of the purpose of the event, which was to focus diplomatic and donor attention on the need to commit, both politically and financially, to helping those affected by displacement. This was not a forum for trying out new ideas as much as it was a theatrical event to put on record the commitments (some of them new) to remain committed to the Global Compact. Had those commitments not been forthcoming, the Compact would have effectively been dead.

One exception to the scripted presentations was a session that launched GAIN, the Global Academic Interdisciplinary Network. This network is called for in the Global Compact on Refugees and is aimed at facilitating research, training and scholarship opportunities to deliver on the GCR; helping junior academics to expand their exposure to global networks and discussions; and broadening the geographical and thematic scope of disciplines and academics working on refugee and displacement-related issues. Academics from different regions discussed their efforts so far to build local networks that would feed into the global structure once it is in place. This explicit collaboration between research, education and policy is a really exciting aspect of the GCR. 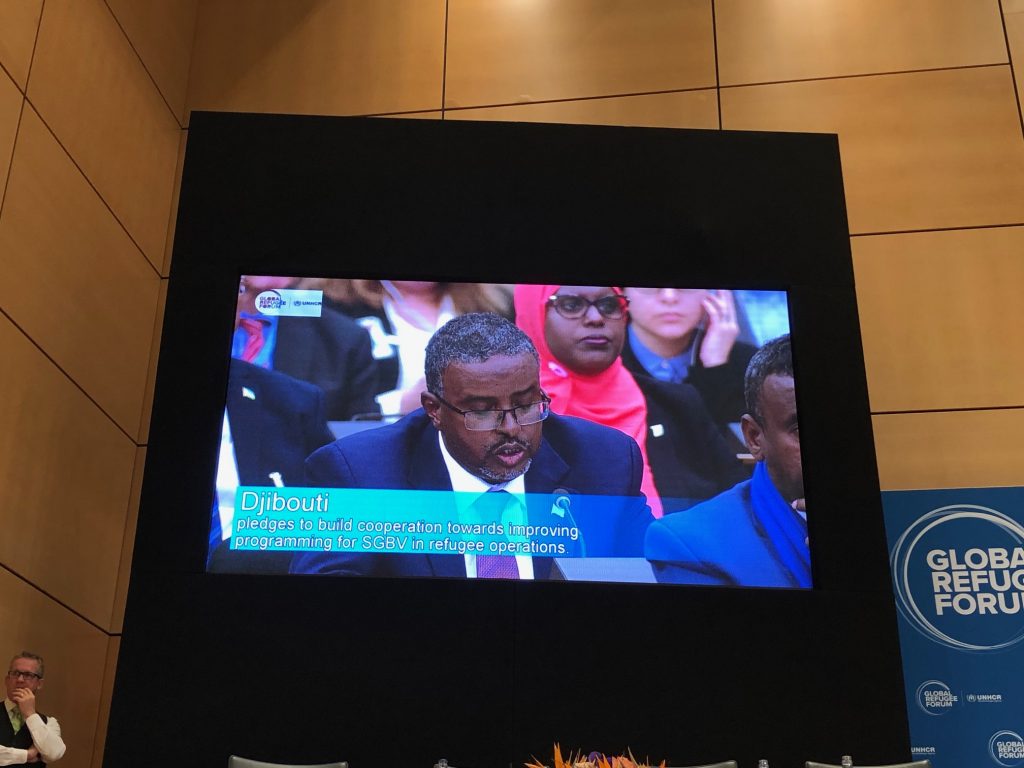 There was a heavy focus on education, jobs and livelihoods – these are the main areas where progress can be tracked in the regions that have done the most to implement the Global Compact, and where its operational Comprehensive Refugee Response Framework has been introduced. In the region where I work, there have been some considerable successes, led in no small part by the political stewardship and technical coordination support of the Intergovernmental Authority on Development. In Ethiopia, a Proclamation on Refugees was passed in January 2019 that guarantees many refugees the right to work, to move, and to access social services. In Djibouti a new commitment to refugee education has been introduced. Uganda’s model of facilitating limited local integration of refugees through extending rights to work, study, and own property including land has become a model that many other countries have looked to for inspiration. The work of regional authorities in gathering political commitments to the CRRF processes and providing technical support to countries has been key in the Horn of Africa as well as in Central America, and I moderated a discussion bringing out the experiences of Uganda and El Salvador at the country level and MIRPS and IGAD at the regional level.

I took the opportunity to distribute 200 copies of the new report from the Research and Evidence Facility’s Comprehensive Refugee Reponses in the Horn of Africa: Regional Leadership on Education, Livelihoods and Durable Solutions, which highlights some of the main achievements in the region. I could have easily distributed many more if I had been able to carry them.

There were also a lot of private sector businesses present. The highlight for me – a girl from Vermont – was the unveiling of Ben and Jerry’s new flavour Cone Together, which will raise money to support refugee programmes – by none other than B & J themselves. Lego and Ikea Foundations were also there, but so too were groups like the newly-launched Amahoro Coalition who are working with African businesspeople to generate jobs and scholarships for refugees.

Refugee representation was strong at the Forum, with over 80 refugee leaders present from all over the world. Hopefully there will be even more at the next Refugee Forum. In another session that I moderated on Solutions, Susan Grace Duku who has been a refugee from South Sudan living in Uganda for the past 21 years, gave an impassioned plea to the packed assembly hall to pursue peace, and to include women in the pursuit for peace, to make return possible. I spent one evening drinking beer and watching football with a few refugee representatives – they were happy about the Forum, but understandably cautioned that the proof will be in the pudding (ok, my words, not theirs, but the sentiment was the same) and we will need to see what real and lasting change the Forum brings. 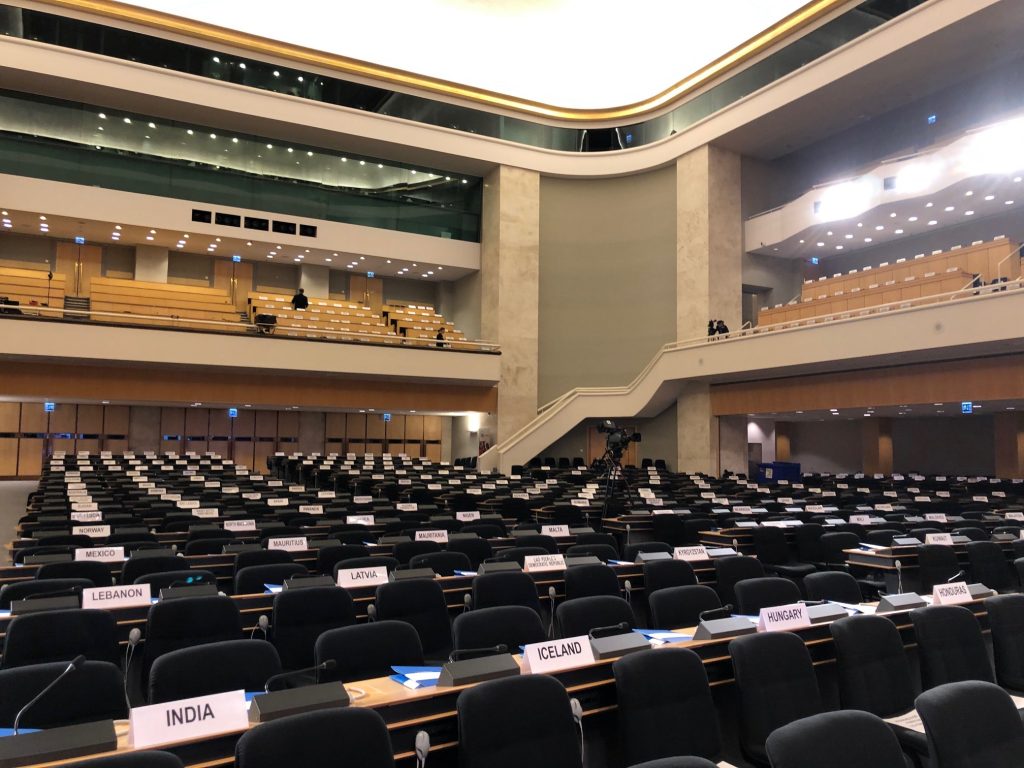 As the halls empty and people return home from the Forum, many to take a few weeks of leave and hopefully to start the new year refreshed and reinvigorated, I hope that the momentum from the Forum will continue to guide work towards bringing the Global Compact on Refugees to life, making it bring real and lasting support to communities and countries affected by displacement and to improving the lives of the displaced themselves.