Guest blog by Saša Rajšić. Saša Rajšić is an independent artist and researcher from Karlovac, Croatia. Like thousands of fellow Serbs from Croatia, he fled his country during the war in Yugoslavia and lived as a refugee in Serbia before immigrating to Canada in 2005. Rajšić studied at OCAD University in Toronto and the University of the Arts Helsinki. Recently, he presented his work at Khalil Sakakini Cultural Centre in Ramallah, Palestine and at the Annual Meeting on Law and Society in Toronto, both in 2018. He is a member of Displaced Peoples, a collaborative research network of the Law and Society Association and Art and International Justice Initiative. 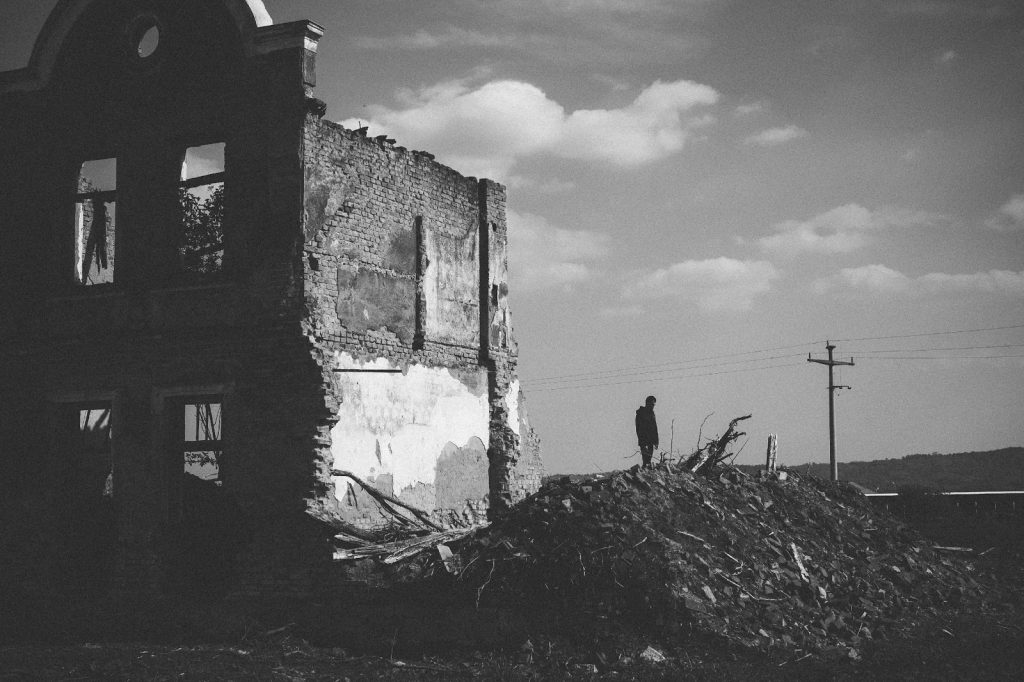 Recently, I had the honor to participate in a panel hosted by the Migration Leadership Team reflecting on arts and social sciences interventions in Refugee and Migration Studies. The session took place as part of the 2018 International Association for the Study of Forced Migration (IASFM) Conference and was hosted by the Department of Balkan, Slavic and Oriental Studies, University of Macedonia and the Laboratory for the Study of Culture, Gender and Borders in Thessaloniki, Greece.

It was a chance to learn from the other panelists, Nassim Majidi, Heaven Crawley and Nergis Canefe and to present my latest project To Un-Become.

To Un-Become lurches between historic reminder and hallucination, between geographical document and unreliable childhood memory, between collective tragedy and personal healing.

The transformative potential of crossing borders

There is a transformative potential in crossing borders across disciplines, space and time. In 2018, this is widely recognized and collaborations between artists and social scientists are increasingly popular. The boundaries of disciplines are being crossed. As with all borders, sometimes such meetings are easy, sometimes not. Still, I hope that this practice of collaboration continues to exist and generate interest.

In crossing borders, whether across academic disciplines, temporality or geographical regions, we hope to challenge ourselves. We aspire to become more integral and civic-minded individuals; more responsible citizens, peers, neighbors, friends, lovers, and revolutionaries, in the best senses of these terms.

Collaborations between artists and social scientists have a transformative potential for the audience as well as for the participants themselves. Time here is a crucial element of impact. These the results can be visible in the days, weeks, or even months following the project.

However, it is the very act of collaborating, in which both sides are willing to dive into an unfamiliar methodological processes, that carries the most transformative potential. As artists and social scientists we have different ways of working and we need to adapt. We seek to capture a common something but through different lenses.

As we discussed as participants in the panel in Thessaloniki, as artists, our eclectic methodology includes performance exercises, rituals and games that have been borrowed, “cut-and-pasted,” and extracted from several disciplines and cultures.

Social scientists, meanwhile, often face strict deadlines and the need for fixed conclusions which, in art, can be more challenging to deliver.

Through the process of collaborating with researchers in the social sciences, our ultimate goal as artists is to help participants (and ourselves) to become good ‘border crossers’. We must practice what we preach and learn to be mobile across multiple territories, and not just in the terrain of making art.

‘Un-becoming’ as a process of discovery

Becoming better border crossers is a process of discovery which is linked to processes of un-becoming as well as change and growth. It is an experience taken both as a group and alone. Witnessing this discovery is a moving experience. Indeed, one of the most radical and hopeful aspects of performance pedagogy is precisely its profound transformational dimension.

Participants who are willing to leave their comfort zones and push boundaries, as those between the arts and social sciences, can discover new links between political, poetic, sensual, and spiritual possibilities of performance. Often, they relate a more intricate connection between their everyday lives and the civic realm.

To Un-Become is a multimedia art project which explores this experience of crossing borders in the physical and theoretical realm. In it, the concept of un-becoming is explored through revisiting Operation Storm in Yugoslavia and its consequences some two decades later.

My interest in the concept of ‘un-becoming’ was sparked by a war crimes trial in which General Ante Gotovina, a former Croatian military officer, was found guilty of organizing and implementing the permanent and forcible removal of the Serbian people in a 1995 military action.

Not long after, the Appeals Chamber of the International Criminal Tribunal for the Former Yugoslavia reversed General Gotovina’s convictions for crimes against humanity and he then returned to Croatia where many considered him a national hero.

My art was sparked by the following question: if the ‘reversal process’ allowed General Gotovina to successfully un-become a war criminal, was the same un-becoming process possible for the survivors of his actions?

Crossing boundaries of space and time

This question was, for me, at once personal and political. To research this question, in April 2017 I retraced the journey of over 400km from my family’s first refugee shelter in Serbia to our former home in Croatia. This was about crossing boundaries not just across disciplines, by bringing history and politics into my art, but traversing borders between space and time.

For over two weeks, dawn to dusk, I walked following in reverse the same route which was taken by over 200,000 other refugees two decades previously during Operation Storm.

Homes in ruins surrounded by collapsing walls can still be found in Bosnia and Herzegovina and Croatia. These images evoked in me a stream of suppressed memories and emotions and inspired elaborate visions that would otherwise have remained unprovoked.

This journey merged the evidence of war with my own memories, both actual and constructed; it created a ‘visual noise’ that became my truth during the walk.

I decided to walk not to test my own stamina, but rather to surrender the experience to the will of nature. I tasked myself not to merely move between two points, but to temporarily adopt a way of being in which both facts and imagination merged.

The personal and political

In 2017, the border between Serbia and Croatia was once again a place where humanity was at its darkest. Thousands of refugees were denied entry to the European Union and were in temporary refugee camps in Serbia. Some of them were living alongside long-uprooted Serbian refugees facing over twenty years in exile.

In their movement across this land, the destinies of both refugee groups are forever soldered together in history. The destinies of their oppressors, meanwhile wander between war criminals and national heroes.

The unbecoming project serves as a humble homage to millions of current refugees whose personal and collective tragedies I do not even claim to understand. But I am interested in how to make collaborations between the arts and social sciences, and conferences like the one in Thessaloniki, a platform for new forms of such production.

At the conversation, it was noted that the notion of un-becoming in some ways evokes the process of unlearning which scholar Paula Banerjee reportedly raised in the initial Delhi migration conversation. How can we take the energy generated forwards at these Migration Conversations beyond the talking shop; not just to build ‘new evidence and knowledge’, but to unpack and understand these processes of unraveling and ultimately, peace and reconstruction?

A report from the Thessoloniki event is also available for download.