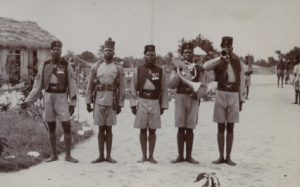 The First World War had a great impact on West Africa, as Britain ordered the invasion of German colonies in Cameroon and Togoland, using its own colonies as base. The West African Frontier Force, drawn from Sierra Leone, Ghana, Nigeria and Gambia played a key role in the campaign. War had also had a great impact on the civilian population, as the British drew off workers and resources. How did African soldiers experience the campaign? What did the war mean for West African societies as a whole?

Several talks will explore these and other questions. Staff and volunteers of the African Heritage and Education Centre will present an exhibition of their work on their Heritage Lottery funded project on the West African Frontier Force and will be there to discuss the project. The exhibition will be launched by The Ghana High Commission.

Staff from the Great War in Africa Association and The National Archives will be there to advise on research. The African Heritage and Education Centre is particularly keen to engage with those whose heritage reaches back to West Africa in the war years.