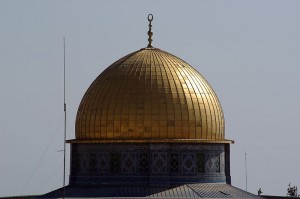 The Dome of the Rock, viewed from the roof of the Austrian Hospice (via Wikimedia Commons at https://commons.wikimedia.org/wiki/File:Jerusalem_Dome_of_the_rock_BW_11.JPG)

The Palestine Exploration Fund was founded on May 12th 1865 in the Jerusalem Chamber of Westminster Abbey. One of its founding members was the Dean, Arthur Penhryn Stanley and its roots lay in his involvement with the Jerusalem Water Relief Fund which had necessitated comprehensive professional surveying work in the city in 1864.

Read more about the early years of the PEF on archaeology blog Can you dig it?

The post on Can you dig it?  is by Adam John Fraser, Librarian at The Palestine Exploration Fund