Exploring the World of Shan Manuscripts

Exploring the World of Shan Manuscripts

In my previous blog post, An Introduction to the World of Shan Manuscripts, I wrote “the Shans created manuscripts in their own unique styles, features and formats.” For this post, I would like to extend my writing on or along the line of the ‘features’ of Shan manuscripts.

To start with, it is worth noting that many Shan manuscripts were ended up in the archives and special collections in the West, where there were very few, even modern Shan, who can read the texts in the manuscripts. Thus, one reason for these manuscripts being attracted by Western collectors could be undoubtedly because of their distinctive physical features. 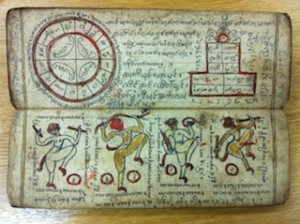 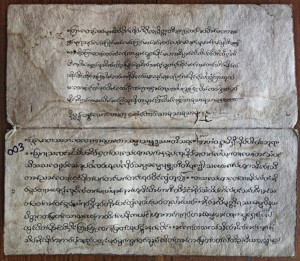 Another interesting aspect of the Shan manuscripts is that most Shan manuscript literatures, both Buddhist and non-Buddhist, are written in the narrative styles of epic poetry, with variety of genres and rhyming styles. They were composed in such entertaining style so because they were especially prepared for reading out loud to the audience at ritual events. Leslie Milne, an anthropologist, who made extensive research on social traditions and customs in the British colonial Shan states, beautifully described the Shan customs in connection with manuscript literature, as she wrote in her famous book, Shans at Home, “many Shans read their scriptures with manifest sincerity and delight. In their homes, in rest-houses, in monasteries, or gathered around an open fire, Shans may be seen listening with reverence to the rising and falling cadence, as their reader chants a birth story of their Lord Gautama, or of the beauty and bliss of Nirvana” (Milne 1910, p. 214).

Having written about some fascinating features of the Shan manuscripts, we should not forget that there are also some strange and curious sides of the Shan or Tai manuscripts, and perhaps this is what Susan Conway, a long standing researcher on Tai textiles, called ‘Tai Magic: Arts of the Supernatural in the Shan States and Lan Na’ which is the title of her new book, recently published by the River Books.

While many Shan manuscripts are now ended up in archives and special collections, such manuscript related traditions of ritual practices are still continuing among the Shan communities today, as discussed by a Pali and Buddhist scholar Kate Crosby in her new book, Theravada Buddhism: Continuity, diversity and identity, published by John Wiley & Sons Inc.