An Introduction to the World of Shan Manuscripts

An Introduction to the World of Shan Manuscripts

The tradition of producing manuscripts has been an important custom among Shan communities for centuries. The production of manuscripts is in fact a way of publishing, as was also the case in other countries before the era of printing press, but the tradition still continues in Shan communities even in the age of eprint or online publication (although this tradition of making manuscript is now fast declining). Thus, Shan manuscripts can be found everywhere all over the Shan State, in Buddhist monasteries as well as in people’s houses. There are very few Shan houses where you do not find manuscripts.​

Like the nature of manuscripts from other nations, the Shans created manuscripts in their own unique styles, features and formats.

The tradition and development of producing manuscripts, especially Buddhist texts, grew out of traditional ritual practices, such as Buddhist merit-making, spiritual healing, charm and tattooing customs in which the use of manuscript texts are often involved. As a result, Shan manuscripts can be found all over the places in Shan State. Today, many Shan manuscripts can be found even outside the Shan communities, such as antique shops, research libraries and art collections. 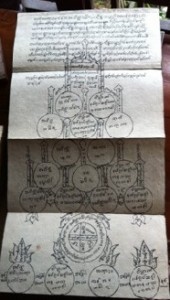 The contents of Shan manuscripts cover various areas of subjects, starting from folk stories, spiritual healing, charm, tattooing to religious texts, and therefore these manuscripts are invaluable primary resources for vast areas of Southeast Asian studies in general and Shan or Tai studies in particular.

However, the problem is that many Shan manuscripts have been hidden, partly because even those from the archives and research libraries have not been fully catalogued, and partly the Shan State, where most Shan manuscripts were produced, has been hampered by civil war for many decades, consequently limiting researchers to explore the world of Shan manuscripts. Fortunately, there are some research projects on Shan studies in recent years, whose works have been partly undertaking the cataloguing of Shan manuscripts, and two of such projects are the SOAS-based Shan Buddhism at the Borderlands project, funded by the British Academy, and the Oxford’s Bodliean Libraries-based Revealing Hidden Collections project, funded by the Dhammakaya Foundation.

Also, another good news about Shan manuscripts is that there will be an exhibition of digital images of Shan manuscripts from SOAS Archives and other manuscript collections. Supported by The Southeast Asian Art Academic Programme (SAAAP), SOAS and other generous donors, the exhibition will take place in the Wolfson Gallery of SOAS Library for a period of two months in November and December 2014. Further announcement on this exhibition is to be made as the preparation progresses. In the mean time, any related enquiry can be directed to Jotika Khur-Yearn at jk53@soas.ac.uk.