As well as digitising and making available rare and unique books, the Two Centuries of Indian Print Project also works with South Asian institutions to engage and promote capacity-building and skills-sharing elements between the UK and South Asia. 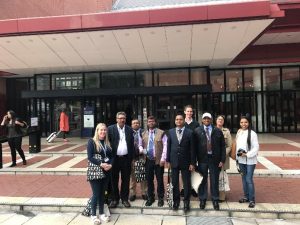 As part of this two skills-sharing and exchange programmes were organised with the National Library of India (NLI).  These programmes took place in September 2017 and November 2017 and were each five days in length.

The first Skills Exchange Programme was attended by five senior library officials from the NLI whose interests lay in learning about the operating structures of departments across the whole library, in particular Imaging Studios, Conservation, and Collections Metadata. The second Skills Exchange Programme was attended by five mid-level library officials from the NLI. This group had slightly different interests than the previous group in areas such as events and exhibitions, cataloguing, and outreach responsibilities with local community groups and children. Throughout their five days at the British Library, each group attended 17 presentations and 8 tours led by different members of British Library staff across all different departments within the Library. 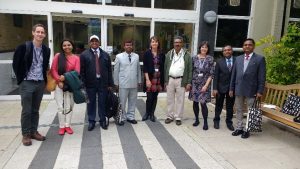 The feedback from these programmes was excellent – the group of senior library officials showed great interest in the operating systems in use at the Library such as the methods in which books, when ordered by readers, are sourced in the basements and transferred to reading rooms. They expressed a keen interest in implementing a similar system in the NLI and were given a lot of technical information by managers in these areas who provided them with the information they would need to do this. They were also very interested in Electronic Legal Deposit and collections metadata; and they received interactive presentations in both these areas. One official commented that he felt “upgraded with innovative ideas” after receiving these presentations

The group of mid-level library officials left many examples of what they learned and what practical knowledge and ideas they will take back to implement in India. One of the officials praised the use of clear plastic bags for personal belongings in the reading rooms and plans to implement this system in the NLI on his return as a way to help monitor what readers bring into reading rooms. Another of the officials found the conservation of different materials and textiles very interesting.

All of the officials on both programmes felt that having online access to the digitised material undertaken on the Two Centuries of Indian Print project and the digitisation of other Indian related material, such as India Office Records, was a great opportunity for users around the world.