This is Artful Resistance: The Power of Tatreez

This summer, I had the privilege of returning to work at Bourj el Chemali, a Palestinian refugee camp founded in 1955 by UNRWA (United Nation Relief and Works Agency) following ’Nakba’ or ‘catastrophe’ seven years before. I worked alongside an organization called LEAP (Learning for the Empowerment and Advancement of Palestinians) whose partner organization Beit Atfal Assumoud (BAS) was founded in 1976 after the Tal Al Zaatar massacre, providing assistance and accommodation to orphaned children. BAS now has centers in each of the ten Palestinian camps, running youth programs, sponsoring families in need, providing economic and professional opportunities for youth, as well as conducting programming for the preservation of Palestinian identity and culture. By working within these organizations, I was able to learn about the history of political movements and projects within the camps and the ways resistance manifests today.

Throughout the history of Palestinian struggle against occupation, apartheid, displacement, and injustice, women have played a central and pivotal role in resistance. One of the most prevalent and salient forms of women’s resistance that continues today is the Palestinian art form of tatreez. The camps of the south of Lebanon, especially Rashidieh camp, have a robust tatreez cooperative where I was able to learn about the significance of tatreez and the pivotal role it continues to play for Palestinians, especially women, in preserving cultural heritage.

The practice of tatreez originated in Palestine over 3,000 years ago. It is a unique form of embroidery that brings together colored threads in various patterns to create traditional motifs. Motifs were area-specific, as well as symbolic of important events, such as a wedding or pregnancy. Colors utilized would also symbolize different stages of life; in Hebron (a city now in the West Bank), for example, green was primarily worn by young women whereas purple indicated a woman who was farther along in age. Furthermore, different shades of colors denoted regional differences, where for example the city of Ramallah primarily used a pure and bright shade of red where the area of Khalil instead stitched with a brownish red color. A female led art form, tatreez training would begin for young Palestinian girls at the age of six or seven, in which elders in the community would pass down skills and patterns from generations past, preserving traditional and unique forms of knowledge. Because of the vast amount of time and labor put into crafting these pieces, learning the art of embroidery was a form of schooling for young girls and women, as well as a method of self expression, communication and representation of womanhood. Tatreez was a cornerstone of Palestinian culture and continues to be both a fundamental cultural and economic aspect of Palestinians women’s lives.

This history of tatreez parallels the political history of Palestine, because as the lives of Palestinians changed, so did the artform. After the Nakba in 1948 when over 700,000 Palestinians were expelled from their land and around 400 cities and villages destroyed and depopulated, women were expected to join the workforce in order to support their families, and therefore the practice of embroidery subsided for some time. In the 1960s, embroidery returned but was substantially changed; because of the harsh economic realities and time constraints, cheaper cottons were utilized, motifs were simplified, and machine embroidery became more common. Furthermore, because of the nature of the refugee camps many Palestinians were living in across the region, populations from various areas, cities, and villages were living altogether. Therefore, the specific regional styles that were traditionally stitched were combined to construct a new ‘camp’ style that also incorporated styles from the countries that refugees were living in as well as the influx of Western culture in the region.

Embroidered clothing and garments became visible and recognizable forms of Palestinian nationalism as they represented a very specific Palestinian cultural art form; therefore, tatreez became one of the fundamental ways of preserving Palestinian heritage. Different institutions were formed in order to do just this, opening workshops, training women, and sharing knowledge from elders so that patterns could be copied and marketed. This not only provided work and income for women in Palestinian refugee camps where economic opportunities were few and far between, but also spread awareness about Palestinian history, culture, and current realities.

The political significance of tatreez only increased during the First Intifada, or ‘uprising’, that took place from 1987 until 1993. During this time, the Israeli army confiscated visible Palestinian symbols such as the national flag. In order to continue to resist and stand in defiance to Israel and its occupation, Palestinian women created what is known as the ‘intifada dress’. Cut as a traditional Palestinian ‘thobe’ or dress, the intifada dress was embroidered with Palestinian flags, maps of Palestine, traditional natural symbols such as an olive branches or orange trees, and phrases such as ‘We will return’, all woven in traditional Palestinian colors. Through the creation of this intifada dress, Palestinian women blatantly challenged the Israeli ban on public exhibitions of Palestinian nationalism, exhibiting their political agency and defiance of Israeli occupation. As globalization has increased and embroidered patterns have become increasingly popular, clothing companies in Israel have attempted to copy tatreez patterns, mass market and produce them, and pass them off as their own cultural tradition. However, because tatreez patterns are so intricate, they are difficult to copy. Therefore, this appropriated Israeli embroidery fail in successfully copying tatreez patterns and it becomes easy to ascertain was is real Palestinian tatreez and what is simply a failed counterfeit. The occupation, therefore, does not just manifest physically but with the appropriation of cultural practices and traditions. 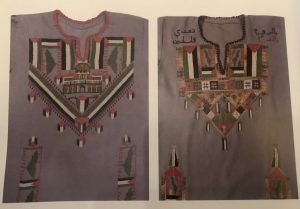 Today, in the Palestinian camps in Lebanon, tatreez remains an important political and economic tool for women. Recent numbers report that there are close to 500,000 Palestinian refugees in Lebanon.1 However, they are barred from over 70 professions, including medicine, farming, fishery, and public transport.2 A new law passed by the Lebanese Ministry of Labor in July 2019 barred all refugees, including Palestinians and Syrians, from working in any capacity without a work-visa that is both expensive and extremely difficult to obtain.3 Because of this new law, the economic conditions of Palestinians in Lebanon are only further deteriorating and there are currently protests, demonstrations, and strikes occurring in Lebanon and in solidarity around the world in order to reverse this law and raise awareness of the Palestinian refugee condition.

Within this context, tatreez and the economic opportunities it provides for women in the camps is essential. Rashidieh camp, the oldest camp in Lebanon and one of three camps within the city of Sour, has become a center for tatreez production. Working within the BAS center in the camp, the tatreez project started in 1987.4 Together with two other centers one of which is in Beirut, Rashidieh camp’s tatreez collective is comprised of around twenty women who have been trained by other members of the collective. Women work within their homes, affording the opportunity for women to work while also caring for their families.5 They sell their finished pieces around the world through solidarity networks and people dedicated to spreading awareness about the Palestinian condition. Insaf Ajjawi, one of the woman who runs the collective explained that because of the economic conditions, the collective provides and unique and needed opportunity. However, she stressed that it is a labor-intensive process, and therefore is often undertaken with the both the enjoyment of the craft but also the knowledge that they are actively preserving Palestinian identity and heritage. She further explained that for this reason, she accepts and trains anyone willing to learn as it is such an essential form of knowledge about Palestinian culture.

While the Palestinians within Lebanon are still resisting, and struggling against their oppressors both in Israel and in Lebanon after over 70 years, the craft of tatreez continues to provide a political and economic tool for women in the camps. It sustains Palestinian art forms in the face of appropriation and is a method of educating future generations. By continuing to produce this Palestinianspecific craft, women in the camps as well as in Palestine refuse to allow Israel to erase Palestinian culture and traditions whilst economically bolstering their communities. Tatreez is an artful practice of resistance whose power has sustained war, destruction, and expulsion, and will one day be practiced in a free Palestine.

To donate to the BAS and the Tatreez Embroidery Project in order to continue their work and the preservation of Palestinian heritage, please see the link below: http://www.socialcare.org/portal/donations/66/