By Centre for Gender Studies|May 30, 2019|MA Students, Our Work|0 comments

Benny Hunter is a postgraduate student studying Politics of Conflict, Rights and Justice. He is also a writer and campaigner for migrant and refugee rights.
Twitter: @BennnyH
Guardian writers profile: https://www.theguardian.com/profile/benny-hunter

Since January of this year, Parkfield Community School in Birmingham has found itself at the centre of a ‘row’ over the education of primary-school children on LGBT issues. Protests organised by parents outside the school gates have centred on the “No Outsiders” programme created in 2014 by teacher Andrew Moffat, which introduces children to characteristics protected by the Equality Act, such as sexual orientation, through story-books. The protests have since spread to other schools. Much of the reporting on the ‘LGBT-lessons row’ has focused on the fact that 99% of the pupils at Parkfield are from Muslim homes and that leading voices in the protests against the new curriculum have cited the incompatibility of ‘LGBT lifestyles’ and Islam. The Daily Mail reported that “Furious Muslim parents” are withdrawing their children from school. Large numbers of racist comments about Muslims have appeared in response to social media posts by LGBT media about the ‘row’.

In response to the protests, former head of Ofsted, Sir Michael Wilshaw, said that protesting parents have to accept “they’re living in this country… we are a liberal country”. In defending LGBT lessons, Wilshaw is externalising homophobia and presenting it somehow as foreign to Britain and British culture. Much of the defence of the “No Outsiders” program has been in a similar vein, framed as a defence of British values and of liberalism from “outsiders”. Jasbir K. Puar’s theory on ‘homonationalism’ describes the ways in which gay, lesbian and queer people are deployed in production of patriotic and nationalist discourse. Many of the political and media elites who invoke the importance of LGBT inclusion, are doing so to identify Islam and migrants as a threat to British society. Similarly, Sara R. Farris describes the way that both far-right nationalists and neoliberals deploy anti-Islam representations in the name of women’s rights as part of civic integration programs that present Western cultural practices as “civilizationally more advanced”.

Yet, Homophobia is neither inherent to Islam or Islam-specific. In Birmingham, Muslim parents have been joined in their protests by Jewish and Christian voices. Videos circulating online show speakers, including Dr. Lisa Nolland of the Anglican Mainstream, and Shraga Stern, a London-based ultra-Orthodox Jewish activist, addressing the crowds of protesters outside the school. The support shown by fundamentalist Christian groups for protesting Muslim parents is made more unconvincing by the numerous, explicitly Islamophobic articles shared on the Anglican Mainstream website including reports on “Muslim rape gangs”.

We might understand better the response to the ‘row’ in Birmingham, if we view it in the context of the 16 years that have passed since the repeal of Section 28, which banned teaching of the “acceptability of homosexuality as a pretended family relationship” in schools. During this time the Equality Act has been introduced, consigning non-discrimination on the basis of sexual orientation into law in 2010. However, the Equality Act also protects religious belief. Some of the protesting parents believe that their right to teach their children a different set of values is under threat and that they are being ‘othered’ and policed – and this is not the first time.

In 2014, in what has since become known as the “Trojan horse” scandal, documents alleging a conspiracy by Islamists to introduce a radical Islamic ethos into several secular schools in Birmingham were leaked to the media, sparking a national scandal. Headlines appeared alleging that a number of schools in predominantly Muslim areas of Birmingham had been imposing hard-line religious teachings and fomenting extremism. While, the “Trojan horse” letter itself was quickly discredited as a fake, the allegations it contained took on a life of their own, being reported in the press for weeks on end. A month after the letter, Birmingham City Council claimed that it had received “hundreds” of allegations of plots similar to those illustrated in the letter, some dating back over 20 years. Implicated teachers and governors have always denied that there was any conspiracy to “Islamise” the schools, arguing instead that the goal was to raise attainment among disadvantaged Muslim children through diversifying staff and school boards. In becoming too Islamic, schools in Birmingham were accused of crossing an invisible line that somehow undermined “fundamental British values” – as some governors were accused of by the Department for Education. Even after “successive investigators found no evidence for the claim that students were being radicalised” public perception of a sinister Islamist plot continued to persist.

It is apparent that the “Trojan horse” affair has had substantial influence on the contemporary row over LGBT education. Sarah Hewitt-Clarkson, head teacher at Anderton Park School (one of the schools targeted by protests), has likened the protests against LGBT-inclusive education to the conspiratorial 2014 plot: “Some of the behaviours are very similar… some of the hand slapping on the table – ‘I demand that you will not teach children it’s alright to have two mums’ – those kind of behaviours are very, very similar if not identical to what happened five, six, seven years ago in Trojan horse times”. Colin Diamond, previously Executive Director for Education Birmingham City Council, told the Guardian that since “religious activists” are no longer able to infiltrate governing bodies, they are now trying to influence policy “from outside the school gates”.

The “Trojan horse” affair had a lasting impact on public perception of multiculturalism and Britain’s relationship with its Muslim citizens – it was even mentioned in the 2017 UKIP manifesto. Its impact on British Muslim communities has been even more profound. In its wake, Michael Gove (the Education Secretary under David Cameron) announced that all schools in the country will have to promote “British values” of tolerance and fairness and said that teachers will be banned from the profession if they allow extremists into schools. New clauses were added into funding agreements for academies, stating that the Secretary for Education could close schools whose governors do not comply with “fundamental British values“. It was in the aftermath of these events that Andrew Moffat wrote the “No Outsiders” programme. 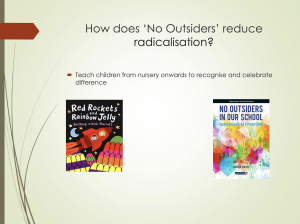 A PowerPoint presentation posted on the School’s website (since taken down, but seen here) showed that the “No Outsiders” programme was introduced so to “reduce radicalisation” in the predominantly Muslim school children, as part of the Prevent duty. In the presentation, there are photographs of rainbow coloured school displays emblazoned with the words “It’s Ok to be Different”. Yet this positive message of inclusion and tolerance for difference is unsettled by its application as part of the Prevent duty – a UK-wide programme within the government’s anti-terrorism strategy aimed at stopping individuals from supporting or taking part in terrorist activities. The same presentation also positively notes the number of primary school children that have been “reported to [the school’s] Prevent lead” and how many have been referred to the counter-terrorism police unit.

The remit of the Prevent duty was widened in 2015 when the Conservative government introduced a statutory duty on schools to report concerns about people who may be at risk of turning to extremism. The impact has been described as a “chilling effect” whereby children have “suddenly stopped talking about specific issues for fear they would be targeted by Prevent”. In alienating and marginalising the Muslim community, Prevent pre-criminalises Muslims as a group, disallowing ‘radicalism’. Ali Nobil Ahmad, writes that “a good (Muslim) citizenry, in this logic, is politically docile, disengaged from world affairs and discouraged from combining religion with political activism”.

The protests against “No Outsiders” are undoubtedly driven by ignorance and by homophobia. The importance of LGBT education cannot be understated, especially at a time where the LGBT community is being attacked in the media and by the Far-Right. For children growing up LGBT, seeing themselves represented and learning that it is OK to be gay, might mean the difference between life and death. At the same time as acknowledging this, it is important to note the controversy that “No Outsiders” has become. The scars of the “Trojan horse” scandal still run deep in communities around Parkfield school. The co-option of the backlash by public figures and journalists has fomented further division and distrust. By installing the “No Outsiders” programme as part of Prevent, and as a strategy to promote and police “British Values,” the importance of the inclusion of LGBT people and of tolerance is lost.

The LGBT lessons ‘row’ in Birmingham has played out in the context of a society where Islamophobia and Homophobia are both rife – where both Muslims and gay people feel under threat. The controversy illustrates not only how homophobia is externalised in a Western context towards a nationalist end, but also that queer politics cannot operate without anti-racism. In seeking a solution, it is vitally important to defend the education of children about LGBT relationships, whilst promoting and upholding empathy with a Muslim community in Birmingham that has been repeatedly vilified. As the row rolls on, it’s becoming more and more evident that only through a discussion between LGBT and Muslim voices together, on equal footing (and through promotion of LGBT Muslim voices in particular) can an anti-racist and LGBT-inclusive politics thrive.