On the “Continuum of Violence”: Remembering Abu-Ghraib Fifteen Years On

CGS student Emily Yue reflects on the events of Abu-Ghraib 15 years on. 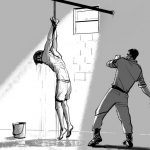 In 2004, 60 Minutes II at CBS News broadcast the images of American soldiers abusing Iraqi prisoners at Abu Ghraib prison in Baghdad. Today, 28 April 2019, marks the fifteenth anniversary of the “shock and horror” that ensued.  The Abu-Ghraib footage should have called for an astronomical reshuffling of the way the West, and in particular the US, is self-proclaimed as the ultimate protector of human rights. On the fifteenth anniversary of its leakage, it is important to remember Abu Ghraib, not as exceptional, but as one of many acts of sexual violence being committed at the hands of imperial powers. Today, Trump’s rejection of the UN’s attempts to end sexual violence in war, reminds us that Abu Ghraib was not an exceptional event.

Following the events of 11th September 2001, President Bush’s response to create a ‘War on Terror’ targeting Arab and Muslim populations, has allowed the US government to legitimise imperial rule under the ruse of self-defence and protection. As is often the case in times of unrest, the US re-asserted a gendered nationalism: the US nation is framed as a female victim in need of saving by its male protector state (see Cockburn 1999). By solidifying this gender binary and placing increased emphasis on hetero- and repro-normativity (see Naber and Zaatari 2014) in the name of reproducing America, the US is united against an enemy other. Any consequent violence is therefore claimed to be self-defense in the name of protecting the nation from further ‘terrorism’: the US emerges not as a perpetrator of violence or a terrorist, but as either a victim or a protector.

The events of Abu Ghraib serve as concrete evidence of US violence towards Iraqi prisoners, a direct aberration of the ‘universal’ human rights which the US is number one producer and supporter of. But instead of being recognised as a perpetrator of violence or as a terrorist state, the US frames the violence it enacts as necessary protection. Reading 9/11 alongside Abu Ghraib, it becomes clear that (homo)sexuality is used as a tool of nationalism, patriotism and empire. To retain its status as a liberal and democratic upholder of ‘gay rights’ on the global stage, the US contrasts and elevates itself against those countries (particularly in the ‘Middle East’) which do not subscribe to its universalized rights. The US co-opts ‘good gays’ into its national narrative in order to exclude and demonize ‘bad’ Arab and Muslim gays, advancing its violent, racist and Islamophobic civilising mission.

In a case study of Abu Ghraib prison, Jasbir Puar (2007)’s analysis of the sexual torture committed by US soldiers on Iraqi prisoners during the war, shows how the events are painted as singular and exceptional in order to mask the US’s role as a violent terrorist. Since the sexual torture at Abu Ghraib was committed by US soldiers, it should follow that myths of the US as sexually liberated are dispelled as nationalist propaganda. But despite it being US soldiers torturing Iraqi prisoners, the US’s response to frame the events as singular and exceptional, claim that the US soldiers’ behaviour is not reflective of America in general. This is in direct opposition to the US’s Orientalist (see Said 1987) depiction of an ‘essential’ Arab or Muslim male terrorist (see Amar 2004).

The US holds itself up not only as the world’s sole protector from terrorism, but as the definer of who is terrorist. The US’s war on ‘terror’ marks as terrorists those who do not fit inside the normative white US subject, and conflates Arab-looking subjects and Islam practitioners with Islamic extremists (see Butler 2006). Puar states “the actions of the U.S. military in Saddam’s former torture chambers… narrows the gap between us and them—between the patriot and the terrorist” (2007: 81) delegitimising the US’s role as saviour/male protector, instead moving it towards (male) terrorist. But as public and governmental responses have revealed, the US is far from being understood as terrorist.  I cannot help but wonder, what will it take for the U.S. to stop being either a victim or a savior, and to be recognized instead as a perpetrator of terror?

In an attempt to convey the “sexual humiliation and ritual torture of Iraqi prisoners” as exceptional, President Bush stated “their treatment does not reflect the nature of the American people” (Puar 2007: 81). By asserting the ‘exceptional’ nature of the homophobic Abu Ghraib torture, the US maintains its role as protector (and creator) of universal ‘gay rights’ (see Mikdashi 2011). Instead of exposing the US as terrorist, President Bush reframed the sexual “torture of Iraqi prisoners at Abu Ghraib” (Puar 2007: 80) by reaffirming the International Humanitarian Law female civilian/male combatant gender binary: the US is transformed from female victim of 9/11 terrorism, to male protector (vis-à-vis its 2003 invasion of Iraq and subsequent violence and sanctions). Instead of the 2003 Abu Ghraib events revealing the US as perpetrator or terrorist, the US is again victimised, and the ‘Middle East’ is further demonised as terrorist.

The re-gendering of the nation in times of conflict normally leads to the exclusion of subjects who do not fit inside heteronormative conceptions of gender and sexuality (Naber and Zaatari 2014). However, by co-opting otherwise marginalised ‘queers’ in acts of unified patriotism against the enemy, sexuality is employed as a tool of empire, and the US still manages to prevail as victim and saviour: victim in solidarity with the world’s homosexuals – including the torture victims – and masculine protector, not only of its female nation, but of the rest of the world from terrorism and homophobia.

Not only is the torture and violence of Abu Ghraib neither singular nor exceptional: torture is vital to the project of ‘liberation’. The paradox of any civilizing mission is the exchange between the ‘perpetrator’ and the ‘protector’. Without the constructed terrorist, the US could not claim its civilizing mission to legitimize its colonial dominance. The ‘state of exception’ response to Abu Ghraib is merely a means of disguising this fact from the outside world: disregarding violence perpetrated by the US which occurred before 9/11 as non-related and definitely not terrorism.

At the same time, reactions of (short-lived) sympathy for Muslim men considering the ‘inapplicability’ of homosexuality with the Muslim ‘culture’ (see Massad 2002) work to permanently reify Islam and the Middle East as homophobic, and in turn reinstate the US’s legitimacy to save Muslim ‘queers’. This is only possible under a homonationalist framework where same-sex practitioners all over the world are reduced to their sexuality, allowing the creation of a universal ‘queer identity’ (see Mikdashi 2011). The ‘gay rights’ set by the US can then be presumed to translate for ‘gays’ around the world (see Massad 2002’s ‘gay international).

The images emanating from Abu Ghraib prison are misread by the dominant (white) US public: their viewers see sexual humiliation, misogyny and homophobia – but racism and Islamophobia are so normalized to the privileged ‘color blind’ (see El-Tayeb 2011) that they are bypassed. By shifting the focus from the Iraqi prisoners to gays around the world, the universalization of a ‘queer identity’ allows the US to frame Abu Ghraib as a gay issue, making the universal gay the victim. By including American queers into the victim equation, the response becomes a united America in solidarity with its gays (and all of the gays around the world) against homophobia, with the US torturers exceptional and therefore not reflective of the US. In as far as the US is espousing a homonationalist framework, and separates itself as superior, homophobia is still associated with the Middle East and Islam, so the latter is blamed for the torture and still manages to be painted as the terrorist in this nauseating equation. In a perfect application of homonationalism, the US once again avoids being revealed as a terrorist.

The parallel result of the US’s ‘reactionary’ campaign is the resurgence and reaffirmation of hyper-masculinity.  The reproduction of the gendered protector/victim/terrorist equation reasserts masculinity – whether displayed by the male terrorist, or the male protector state – as that to be feared and therefore aspired to. These interconnected acts of ‘masculinist restoration’ (see Kandiyoti 1988) are not exclusive to the ‘West’. Across the globe, Isis are killing innocent civilians, a white supremacist have targeted mosques in New Zealand and Sri Lanka’s Christians’ community is the latest to become entangled in the ‘War of Terror’  – in each case, hyper militarized masculinity is at work. At the same time that we need to recognize  sexual violence around the world as transnational, and the US must take responsibility. As a self-proclaimed world leader, the US must learn from its past actions, and deter from its hypocritical and violent ongoing occupation of countries in the Middle East. President Trump is living proof of this quandary, as the openly misogynistic and homophobic leader of the United States of America in the 21st century. Violence – as embodying hegemonic masculinity and as perpetuated throughout Trump’s destructive campaign and his Muslim ban – is still offered as the ultimate and only response to the world’s problems.

Amar, 2004. ‘Turning the Gendered Politics of the Security State Inside Out? Charging the Police with Sexual Harassment in Egypt’. In International Feminist Journal of Politics 13 (3): 299-328.