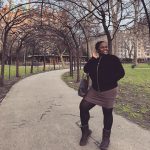 We Are All Different
by Onyeka Nwabunnia

In the midst of seemingly challenging political and economic times, marked by a global resurgence of the Right, there is an overwhelming feeling of uncertainty and sadness. As racist heteropatriarchal neoliberal power continues to replicate itself globally, silencing, oppressing, and excluding, I wonder where hope lies. How might we might begin to challenge, create, and force transformation?

The possibility of transformation lies in a solidarity that doesn’t transcend difference but rather finds its roots within it. While listening to DR. Sara Salem, an assistant professor of Sociology at the London School of Economics, at a lecture titled Decolonisation and Radical Solidarity: Transnational and the Postcolonial Project, I found myself thinking about what transnational feminism teaches us about the importance of radical solidarity. According to Jacqueline Alexander and Chandra Mohanty (2013), the solidarity at the heart of transnational feminisms, articulate “a way of thinking about women in similar contexts across the world in different geographical spaces, an understanding of a set of unequal relationships among and between people and a consideration for the term international in relation to an analysis of economic and ideological process that would therefore require taking critical anti-capitalist positions”. This solidarity existed amongst women of the global south at the onset of the postcolonial period (Salem, 2019). What brought these women together was a shared set of assumptions about what the world looked like as a result of racism and capitalism (Salem, 2019) and how they themselves and their communities were implicated within the existing world order.

Women of colour during the beginning of the postcolonial period saw the oppression they experienced as integrally connected not only to the national project of decolonization but also the International (Salem, 2019). They articulated critiques of global capitalism, the international system, colonialism, racism, and gender inequality (Salem, 2019). Central to their feminist activism and organising was a transnational solidarity that posed a challenge to white feminists and their reluctance to critique colonialism and white hegemony (Salem, 2019). Though they were from varying countries and identities they understood that their experiences of oppression could not be disconnected from each other and instead their differences provided a space for radical imagination and creativity (Salem, 2019).

If transnational feminisms require a shared set of assumptions about what the world looks like in order to produce different ideas about the future through radical solidarity, what might these shared assumptions be today? Though I am aware of transnational feminist organizing, I cannot help but wonder where this solidarity exists. Outside of activist spaces and activist organizing, how might we create this type of solidarity amongst our peers, friends, classmates, or family? I cannot help but think that the possibility of transformation lies in our ability to cultivate this type of solidarity within our most informal spaces.

But where do we begin? As a developing African feminist, I sense that the world is at a global crossroad. The future lies in our ability to mobilize and create solidarity that is healing for all bodies. If we are unable to achieve this end, then the possibility of challenging the ever-strengthening empire is unlikely. Our strength lies in our ability to follow the lessons of the women of colour that came before us. They are an ever-present reminder of the possibilities inherent in transnational feminism and radical solidarity. So yes, we are all different, but it is our difference that creates the space necessary to challenge the growing, ever mutating location-less power.