KURDISH MOVEMENTS IN LATIN AMERICA: REFRAMING THE NOTION OF LIFE

KURDISH MOVEMENTS IN LATIN AMERICA: REFRAMING THE NOTION OF LIFE 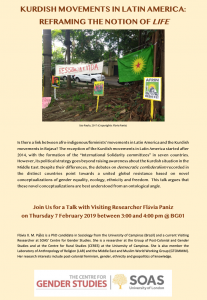 Is there a link between afro-indigenous/feminists’ movements in Latin America and the Kurdish movements in Rojava? The reception of the Kurdish movements in Latin America started after 2014, with the formation of the “International Solidarity committees” in seven countries. However, its political strategy goes beyond raising awareness about the Kurdish situation in the Middle East. Despite their differences, the debates on democratic confederalism recorded in the distinct countries point towards a united global resistance based on novel conceptualisations of gender equality, ecology, ethnicity and freedom.  This talk argues that these novel conceptualisations are best understood from an ontological angle.

Join Us for a Talk with Visiting Researcher Flávia Paniz

Flávia X. M. Paniz is a PhD candidate in Sociology from the University of Campinas (Brazil) and a current Visiting Researcher at SOAS’ Centre for Gender Studies. She is a researcher at the Group of Post-Colonial and Gender Studies and at the Centre for Rural Studies (CERES) at the University of Campinas. She is also member the Laboratory of Anthropology of Religion (LAR) and the Middle East and Muslim World Working Group (GTOMMM). Her research interests include post-colonial feminism, gender, ethnicity and geopolitics of knowledge.