By Centre for Gender Studies|January 25, 2019|Activism, Lectures/Talks/Conferences, Our Work|0 comments 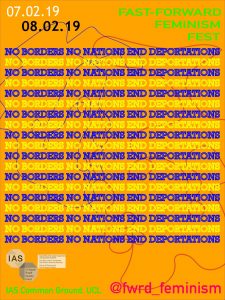 In the last few years we have seen countless numbers of people across the global left destitute, vulnerable and threatened, due to the appalling treatment of migrants and the harmful and discriminatory principles and policies of neoliberalism. Throughout this panel, hosted by academics and activists, will take a trans-feminist approach to explore migration, borders and diasporic experience.

**ALL GENDERS AND PEOPLE WELCOME**

Dr. Nour Abu-Assab is co-founder and co-director of the Centre for Transnational Development and
Collaboration (CTDC). Nour is a queer Palestinian feminist sociologist, who was awarded a PhD in Sociology in 2012 from the University of Warwick. Nour has an upcoming book called “Queering Ethnicities and Nationalisms in the Middle East: The Circassians of Jordan and the Kurds of Syria.”

Dr. Nof Nasser-Eddin is co-founder and co-director of the Centre for Transnational Development and Collaboration (CTDC). Nof is a queer Palestinian feminist sociologist, who was awarded a PhD in Sociology in 2011 from the University of Warwick. Nof’s research interests also include queer feminist methodologies, femininities, decoloniality, and sexual practices and gender performances.

All African Women’s Group is a self-help group of women asylum seekers and immigrants from all over the world , many of whom have been detained in Yarl’s Wood. The group provide help and support for one another, whilst also running a number of campaigns against social injustice, including housing and medical care but largely the existing asylum system.

Dr Alyosxa Tudor is a Lecturer in Gender Studies at the Centre for Gender Studies at SOAS, University of London. Their work connects trans and queer feminist approaches with transnational feminism and postcolonial studies. Alyosxa’s main research interest lies in analysing (knowledge productions on) migrations, diasporas and borders in relation to critiques of Eurocentrism and to processes of gendering and racialisation.

End Deportations are a collective campaign calling for the abolition of deportations and detention centres. Mass deportations are the Home Office’s outsourced practise of rounding people up by their perceived nationality, detaining them, and using violent force to transport them to another country in secrecy. End Deportations has been targeting these flights because they are racist, violent, calculatedly cruel and notoriously difficult to resist alone.