On the 6th of December 2018, the SOAS Centre for Gender Studies welcomed Cynthia Enloe, Research Professor in the Department of International Development, Community, and Environment of Clark University, Massachusetts, to join Nadje Al-Ali, Chair of the Centre for Gender Studies, SOAS in conversation on the topic of Feminists, Resistance, and Scholarship. Enloe’s long and accomplished academic career in the fields of Gender Studies and Political Science drew a large crowd, and she was quick to jump into friendly conversation with audience members in the first few rows as everyone waited for the event to begin.

The conversation between Enloe and Al-Ali covered a broad range of topics including the Women’s March, the Me Too Movement, Anita Hill and Christine Blasey Ford, and women’s voting practices in the US. One of the main points of discussion centred around the tensions between the global and the local, and the importance of grounding activist moments in the appropriate historical and cultural context. Speaking about the 2017 Women’s March(es) and the Me Too Movement, Enloe reminded us that although these phenomena may be labelled as ‘global’ movements, it is important to remember that the individuals participating in these moments of activism come from different contexts and bring with them different motivations and agendas. Al-Ali further pointed out that whilst these moments had a certain galvanising effect on feminist communities in the US and around the world, they also brought to light existing fractures within these movements.

I found this to be a pertinent reminder of the need to resist a false narrative of a universal Euro-American feminist agenda. As Enloe said during the event: “you have to stay locally curious to make sense of anything that looks like its getting global purchase.” Nevertheless, both the Women’s March and Me Too are also significant examples of how, despite having different localised goals and agendas, there is potential for transnational feminist solidarity and resistance. The way in which feminists came together around the organising concept of the Women’s March, albeit with diverse agendas and demands, will offer to the careful analyst rich insight into the makeup and potential of such transnational action. As, too, will the absences observable in these ‘global’ movements.

As Enloe argues in her recent publication The Big Push: Exposing and Challenging the Persistence of Patriarchy, patriarchy is perpetuated when we fail to understand that someone else’s gain does not automatically equate to our loss. This zero-sum way of thinking discourages us from seeking to understand and embrace distinctive but complementary agendas and causes us to lose out on possibilities for mutually beneficial action. Instead, Enloe argues on the side of empathy, understanding, and alliance. Whilst the effects of these two movements cannot yet be fully comprehended, they offer a tantalising glimpse of the possibilities of transnational feminist networks and their mobilising potential.

On the smaller scale, perhaps the most immediately useful takeaway of the event were the practical strategies Enloe shared about how to continue to practice feminist resistance within our own lives, and how to do so with empathy and respect. For the majority-student audience in particular, concerns were raised about how to challenge patriarchy and erasure within the classroom. In answer to this, Enloe passionately argued for alliance-building between peers, even asking students from particular institutions and disciplines to raise their hands and begin to recognise one another. Given the subject matter, it was remarkable that Enloe and Al-Ali were able to maintain a light atmosphere throughout their discussion, frequently eliciting laughter from the enraptured audience.

Overall, this event was a timely reminder and example as we come to the end of a challenging first term at SOAS that there is joy to be had in alliance, and in resistance. 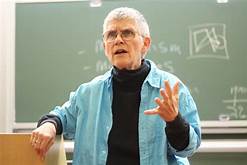 MA in Gender Studies and Law