On Cruelty and Care: Motherhood and the politics of de/renationalisation 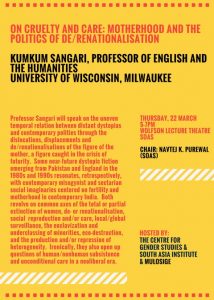 On Cruelty and Care: Motherhood and the politics of de/renationalisation

The Centre for Gender Studies, together with the South Asia Institute and Mulosige invite you to a lecture with Prof. Kumkum Sangari:

Professor Kumkum Sangari will speak on the uneven temporal relation between distant dystopias and contemporary polities through the dislocations, displacements and de/renationalisations of the figure of the mother, a figure caught in the crisis of futurity. Some near-future dystopic fiction emerging from Pakistan and England in the 1980s and 1990s resonates, retrospectively, with contemporary misogynist and sectarian social imaginaries centered on fertility and motherhood in contemporary India. Both revolve on common axes of the total or partial extinction of women, de- or renationalisation, social reproduction and/or care, local/global surveillance, the enclavization and underclassing of minorities, eco-destruction, and the production and/or repression of heterogeneity. Ironically, they also open up questions of human/nonhuman subsistence and unconditional care in a neoliberal era.

Prof. Kumkum Sangari is the William F. Vilas Research Professor of English and the Humanities at the University of Wisconsin-Milwaukee. She has been a Professorial Fellow at the Centre for Contemporary Studies, Nehru Memorial Museum and Library, New Delhi; a Visiting Fellow at Yale University, Delhi University and Jadavpur University; and a Visiting Professor at University of Chicago, Central European University, University of London (SOAS), University of Erfurt and Ambedkar University. She has published extensively on British, American and Indian literature, the gendering of South Asian medieval devotional traditions, nationalist figures such as M.K.Gandhi, Bombay cinema, televisual memory, feminist art practice, and several contemporary gender issues such as personal law, widow immolation, domestic labour, the beauty industry, son selection, commercial surrogacy, and communal violence. She is the author of Solid Liquid: A transnational reproductive formation (2015) and Politics of the Possible: Essays on Gender, History, Narratives, Colonial English (1999). She has co-edited several books including Recasting Women and, most recently, has edited Arc Silt Dive: The Works of Sheba Chhachhi (2016) and Trace Retrace: Paintings, Nilima Sheikh (2013).

Dr. Navtej K. Purewal is the Deputy Director of the South Asia Institute and a Reader in Political Sociology and Development Studies