Deviant, Leaking, and Unruly Bodies: Discursive Performances of Violence and the Everyday Politics of Right-Wing Women

Please join us for our seminar with Dr. Akanksha Mehta:

Right-wing movements that have mobilised women have had uneasy encounters with feminism and feminist politics. Focusing mainly on themes of motherhood and the familial, feminist scholars often view the increasing participation of women in the right-wing as a ‘problem’ that needs to be ‘countered,’ thereby silencing the multiplicity of narratives, roles, politics, and discourses that encapsulate the everyday experiences of right-wing women. In this seminar, drawing on ethnographic and narrative research conducted with Hindu Nationalist women in India and Israeli Zionist settler women in the Zionist Settler movement in Palestine-Israel in 2013 and 2014, Akanksha Meta examines the everyday discourses and performances of violence of right-wing women. She argues that women in both movements use a ‘queer’ language of violence that is built on gendered and racialised hierarchies that frame the designated male ‘other’ as a deviant, leaking, and unruly body that interrupts and threatens Jewish/Hindu normativity, land, piety, and chastity and must be controlled, tamed, and eliminated. The very presence of this deviant, leaking, and unruly body necessitates and legitimises the violence of right-wing women and enables their everyday mobilisations and politics.

Akanksha Mehta is a Lecturer in International Relations at the School of Global Studies, University of Sussex. 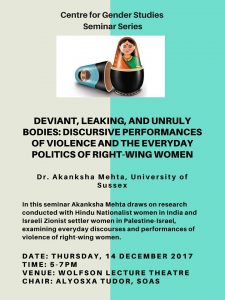