Please join us for a lecture by Scott Long:

Bodies, Sexualities and the Arab Spring: The Wounds of International Human Rights

This is a strange moment for LGBT people’s human rights: huge, well-publicised triumphs in some regions (particularly Latin America and the global North), and massive, violent backlash in others. International human rights movements celebrate their success in recognizing and integrating sexuality and gender, but these protections clearly still have limited reach – and the celebrations may be both premature and insulting. This dilemma raises questions about what the “international” in these rights, and movements, actually means. Is the “international” an aid to, or a misreading of, the local and the particular? There are concrete lessons for activism in the successes and failures of the Arab Spring, where a particular kind of body politics –including sexuality and gender — played a key role in the overthrow of dictatorships, but also carried its own limitations and inflicted its own wounds.

Scott Long has documented and advocated against human rights abused based on sexuality and gender for more than 25 years, working in countries including Albania, Hungary, Iraq, Nepal, Romania, Turkey, Zambia, Zimbabwe, and the United States. He served as founding director of Human Rights Watch’s Lesbian, Gay, Bisexual and Transgender Rights Program until 2010. From 2012-2016, he lived in Cairo, working with Egyptian activists on responses to a mounting state crackdown on trans and queer people.

Rahul Rao is Senior Lecturer at the Department of Politics and International Studies at SOAS. 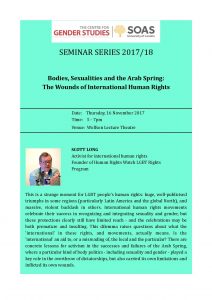