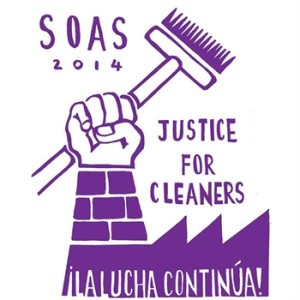 Doctoral students and faculty at CGS have recently released a statement in solidarity with SOAS Justice For Cleaners campaign. The text is below:

We, the undersigned at the Centre for Gender Studies at SOAS would like to express strong support for the Justice for Cleaners Campaign. More specifically we would like senior management to reconsider its position and to bring the cleaners in-house as soon as possible. As the recently published APSE independent report indicates, there is no evidence that bringing the cleaners in-house would cause detrimental financial implications for the school. Outsourcing, on the whole, allows employers to avoid and minimise direct employment relations and the obligations and responsibilities that come with them. Thus, we strongly believe that outsourcing the cleaners will further marginalise a group that has been struggling for basic employee rights at SOAS for a significantly long time. Bringing the cleaners in-house would be far more consistent with the ethos of SOAS, our scholarship, our activism, and our students.

As feminist scholars we are concerned about the way gendered power intersects with other power configurations and forms of inequality. Addressing the gender pay gap at SOAS goes hand in hand with addressing unequal working conditions at SOAS and elsewhere. Also, we know that many professional women in Europe are only able to juggle their careers and caring responsibilities and housework, through the help of migrant labour. It is imperative to stay attentive to the inequalities in our own institution and how they affect all those associated with SOAS. The cleaners stated on many occasions that they would like to be treated as an integral part of SOAS and not like second class citizens. We believe that SOAS should not be part of the problem, but part of a vision for a more equal and fair society.