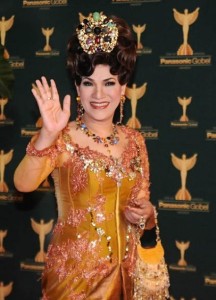 Dorce Gamalama is one of Indonesian television’s most well known celebrities. While she publicly defines herself as a woman, her career is very much based on her public profile as a male-to female transsexual. This paper focuses on Dorce’s performance of gender and class in two films in which she took the titular role from 1989 and 1990; Dorce Sok Akrab (Dorce Up Close) and Dorce Ketemu Jodoh (Dorce Meets Her Match). Drawing on Kate Bornstein’s notion of inbetweenness I examine how both films cinematically invoked the process of transition in terms of class and gender, to investigate how Dorce presents herself to the public and to think further about how gender and class were conceptualised in popular culture in late-20th century Indonesia.