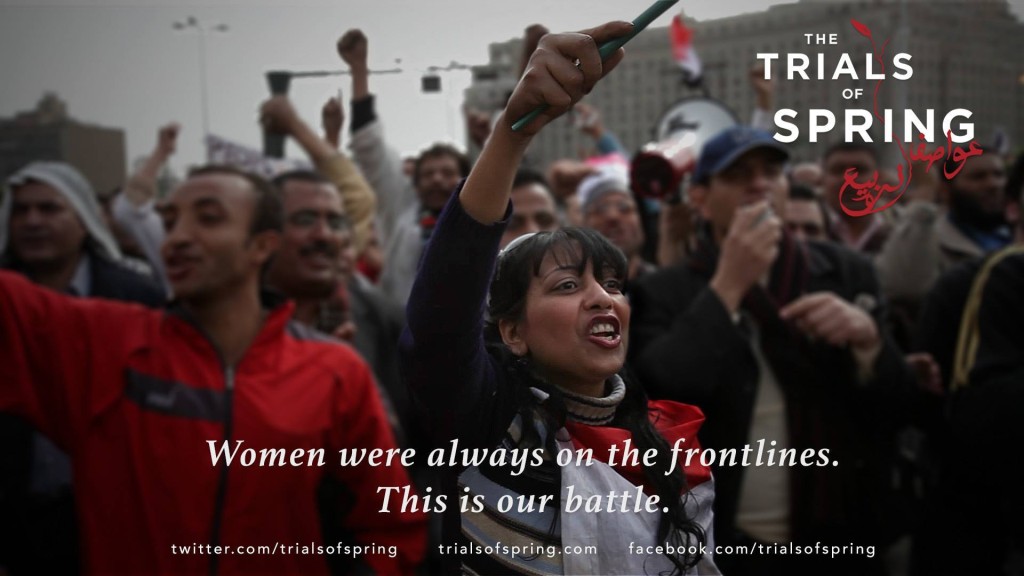 Film Screening – The Trials of Spring

Screening of six short films from the ‘Trials of Spring’ collection. The films come from Tunisia, Libya, Egypt, Syria, Bahrain, and Yemen, and provide a snapshot of the Arab revolutions from the point of view of women who were involved.

In Tunisia, the film follows Ghazala Mhamdi in Gafsa, a poor region in the south, who was part of protests against the corruption of the local mining industry and the Ben Ali regime. In Syria we hear from two women who were arrested after a striking protest in which they dressed as the “Brides of Peace”. From Libya, the relatives of assassinated activist Salwa Bughaighis share their memories of her last days. The films are in Arabic with English subtitles, and where English is spoken there are Arabic subtitles.

The screening will be followed by short presentations from a panel of speakers, followed by a Q&A.

Afaf Jabiri is an activist researcher, who has contributed to a wide range of programs, research initiatives and advocacy campaigns in Jordan and across the Arab region. She has recently completed her PhD in Gender Studies from the School of Oriental and African Studies. She is a council member of WLUML.

Aya Chebbi is an award winning Pan-African feminist activist and blogger. She is well-known for her activism during Tunisia’s Revolution 2010-2011. She is co-founder of the Voice of Women initiative, and part of the WLUML network. In recognition of her achievements, Aya was named as one of Africa’s most Outstanding Young Women leaders in 2013, the Young Achiever of the Year 2015 by Forbes, and received the Excellence in Leadership award from the African Viewpoint Journal 2015. She is currently studying for an MSc in African Studies at SOAS.

Sahar Mediha Al-Naas is the founder and director of Libyan Women for Peace and Freedom. She is a Research Fellow at Muslim for Progressive Values and a member of WILPF. Born and educated in Libya, Al-Naas moved to the UK in 1995 and has worked with women’s organisations in both Libya and the UK. Al-Naas’ research focuses on Libyan women’s political representation in the post Gaddafi era. She is a Co-author of: Women’s Bodies in Post-Revolution Libya: Control and Resistance, in: Rethinking Gender in Revolutions and Resistance: Lessons from the Arab World. Zed Books (2015).

Chair: Nadje Al-Ali is Professor of Gender Studies at the Centre for Gender Studies at SOAS. She has published widely on women and gender in the Middle East as well as transnational migration and diaspora mobilization. Her publications include What kind of Liberation? Women and the Occupation of Iraq (2009, University of California Press, co-authored with Nicola Pratt); Women and War in the Middle East: Transnational Perspectives (Zed Books, 2009, co-edited with Nicola Pratt); Iraqi Women: Untold Stories from 1948 to the Present (2007, Zed Books) and Secularism, Gender and the State in the Middle East (Cambridge University Press 2000). Professor Al-Ali is a member of the Feminist Review Collective.

Women Living Under Muslim Laws (WLUML) is an international solidarity network that provides information, support and a collective space for women whose lives are shaped, conditioned or governed by laws and customs said to derive from Islam. WLUML was formed in 1984 in response to three urgent cases in which women were being denied rights by reference to laws said to be ‘Muslim’. It now spans more than 70 countries. During the Arab revolutions, the WLUML co-ordination office made phone contact with networkers on the ground to get information out when the Internet was cut off.

For more information on the films: www.trialsofspring.com