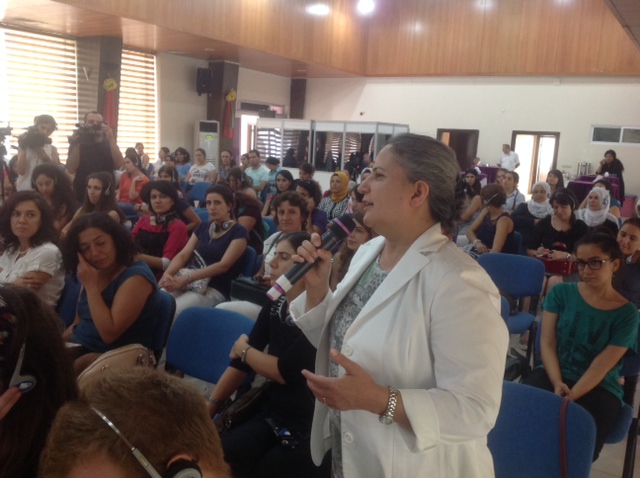 Nadje Al-Ali and Houzan Mahmoud will give two presentations:

Kurdish people have been in the forefront of fighting against ISIS. Kurdish women in particular have played an exemplary role in leading the struggle against ISIS while maintaining the demand for gender justice and equality. Surprisingly, in Iraqi Kurdistan which has been semi autonomous for almost 22 years, women’s rights have been stagnating while Islamism and social conservatism are rising more than ever. This situation will be discussed in comparison with women’s struggles in other parts of Kurdistan.

The relationship between feminism, nationalism and political struggles for democracy, human rights and economic and social justice have played out differently historically and cross culturally. Women’s and gender-based issues tend to be subsumed or side-lined under wider political struggles. However, the northern Kurdish women’s movement, supported by the wider Kurdish political movement, most prominently PKK leader Abdullah Ocalan but also HDP political leadership, is putting into practise radical democracy with gender equality at its centre.
The talk is based on interviews with Kurdish women’s rights activists, female HDP MPs and co-mayors in Diyarbakir and Mardin in September 2015 during the ongoing wave of attacks and assaults by the Turkish state on predominantly Kurdish villages and towns.

Houzan Mahmoud is a Kurdish women’s rights campaigner, and representative of the Organization of Women’s Freedom in Iraq. Her articles on women’s rights were published in UK and international publications. Houzan led many campaigns internationally, including campaigns against the rape and abduction of women in Iraq, and against the imposition of Islamic sharia law in Kurdistan and Iraqi constitution. She has an MA in Gender Studies from CGS at SOAS London University.
http://houzanmahmoud.blogspot.co.uk/

Nadje Al-Ali is Professor of Gender Studies at the CGS, SOAS, University of London. She has published widely on women and gender in the Middle East as well as transnational migration and diaspora mobilization. Her publications include What kind of Liberation? Women and the Occupation of Iraq (2009, University of California Press, co-authored with Nicola Pratt); Women and War in the Middle East: Transnational Perspectives (Zed Books, 2009, co-edited with Nicola Pratt); Iraqi Women: Untold Stories from 1948 to the Present (2007, Zed Books) and Secularism, Gender and the State in the Middle East (Cambridge University Press 2000). Her most recent book (co-edited with Deborah al-Najjar) entitled We are Iraqis: Aesthetics & Politics in a Time of War (Syracuse University Press) won the 2014 Arab-American book prize for non-fiction. Professor Al-Ali is a member of the Feminist Review Collective.