The revival of social nutrition? Possibilities and obstacles

The revival of social nutrition? Possibilities and obstacles 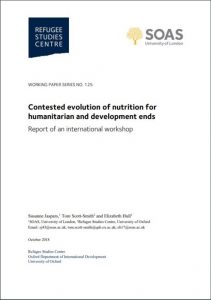 Social nutrition has once again become topical with the threat of famine in Yemen, South Sudan and Syria and the work of the Global Rights Compliance and the World Peace Foundation on accountability for mass starvation.[1]  A social nutrition approach could be one way of providing evidence on the causes of mass starvation.  One problem, however, is that social nutrition no longer really exists as an approach in emergencies.  In September 2017, the SOAS Food Studies Centre and Oxford University’s Refugee Studies Centre organised a workshop on the evolution of humanitarian and development nutrition, with the particular theme of why medicalised rather than social nutrition has come to dominate international nutrition over time.  A report on the workshop has just been published.[2]

Within a general trend of medicalisation and individualisation, social nutrition briefly emerged in the the 1930s and the 1980s.  It took a holistic and context-specific approach to nutrition by examining its social, political and economic causes, as well as the constraints and obstacles in providing aid to those who need it most.  In the 1980s, Pacey and Payne (1985) proposed a social nutrition which recognised that malnutrition had ‘multiple causes, many of which are closely linked to the conditions of inequality of resources, or poverty, and of social discrimination’.[3]  It would include new ideas of food systems, livelihoods, and epidemiology.  In the following decade, UNICEF proposed a conceptual framework on causes of malnutrition which promoted a similar approach.  It went beyond food intake and disease as causes of malnutrition and also included food security, social factors and the health environment, as well as basic causes such as the distribution of resources within society.  This was widely adopted in emergency contexts in the 1990s.  Yet in the decades since, medicalised nutrition has again come to dominate.  These days, policy documents present malnutrition as a decontextualized, biological problem to be solved by the technical administration of nutrients.  The main approaches to addressing malnutrition include the provision of specialised food products, new agricultural technologies, and the promotion of behaviour change in feeding and hygiene practices.  Social scientists, food policy analysts and human rights movements have criticised these practices because they focus on nutrition status itself rather than addressing its social and political causes, they prevent more flexible and people-centred approaches, and they promote the interests of business rather than the malnourished.[4]

The September 2017 workshop brought together nutritionists, humanitarians, historians, sociologists, political scientists, economists and anthropologists, including academics and practitioners.  They explored and debated how and why humanitarian and development nutrition came to be dominated by medical science, and how historical conditions have shaped nutrition practices.  The history of humanitarian nutrition demonstrates how the evolution of nutrition is a story of disjuncture, rather than a long history linear scientific progress.  Social and political circumstances, including colonialism, industrialisation, war, and agricultural policies (and resulting surplus food production)  influenced how malnutrition was perceived, measured, treated, and who was involved in doing so.

Over time, changing technologies and standards change our perception of malnutrition, for example the changing MUAC classifications since its inception in the 1960s, means that it has identified different children as malnourished over time.  The search for universal tools and measurements on the one hand allowed comparison but on the other hand, its link with environmental, economic and cultural conditions is lost.  In addition, the current use of stunting as a buzzword in international nutrition by a range of stakeholders, incorporates multiple and sometimes conflicting agendas ostensibly in pursuit of the same goal.  For example, breastfeeding advocates and infant formula companies both claim to be working towards stunting reductions but promote opposing actions.

A number of financial, operational and political factors also influence what is currently done in nutrition.  With rising standards of nutritional products (i.e. pharmaceutical standards requiring industrial level production and highly certified factories) and ‘scaling up’ nutrition interventions, the production of nutritional food products becomes concentrated in large international companies, to the detriment of local producers.  For some governments, a medicalised approach to nutrition is more acceptable as it focusses on disease or individual behaviour rather than the governments unequal development or war strategies (and their international sponsors).  Funding and access was another determinent in the use of standardised approaches.  When both are limited, a standard package is cheapest and sometimes the only feasible option.  These examples show that even if nutritional interventions are effective in addressing malnutrition, they also have wider social, political and economic effects whether intentional or not.

Finally, participants examined the role of social nutrition in better understanding the complextiy and local specificity of malnutrition causation.  Ethnographic and anthropological approaches yielded important information about who makes choices about food consumption and what economic, social and cultural factors influence this.  These case studies examined were from more stable development contexts.

So, can social nutrition be revived or re-invented to analyse the structural causes of todays protracted crises, famines and mass starvation?  This raises big issues of whether the current political and organisational constraints and economic interests in the current medicalised approaches can be overcome and how.  Can nutritionists find a way out of their current paradigm of individualisation, medicalisation and de-politicisation?  This requires not only a review of the potential role of social nutrition, but also an analysis of who and what is driving the current agenda, and who is already contesting it.  Perhaps the current famines and the focus on accountability for mass starvation can be a starting point.

[2] The report of the workshop can be found here:  https://www.rsc.ox.ac.uk/publications/contested-evolution-of-nutrition-for-humanitarian-and-development-ends

[3] Pacey, A. and Payne, P. (1985) Agricultural Development and Nutrition, London: Hutchinson and Co by arrangement with the FAO and UNICEF.