A few months ago we introduced the new metadata tool lameta on the ELAR blog. Since then the tool has been improved and new features have been added. The lastest release is lameta 0.9.2 Alpha, a preview release. Before upgrading to this version, you should make a backup of your lameta project. We’d love to hear your feedback on this latest release!

lameta is a new tool for preparing data for archiving. It allows you to enter and edit metadata, link metadata records to resource files, keep track of your data management work, and export data sets for upload to an archive.

There are many changes in lameta 0.9.2 Alpha compared to previous versions, and because of a change to how Person languages are modeled (see below), not everything you enter in this version will be retained if you go back to a previous version. For this reason this Alpha version was put out for testing purposes before releasing for Beta testing.

This version has a completely new system for recording the languages of people: 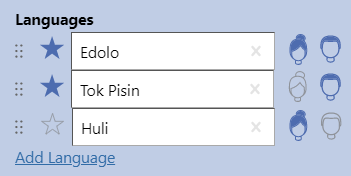 Moreover, opening the project file (.sprj) will now cause lameta to open that project and automatically open it next time you run lameta. This makes it easier to re-locate your project to a different drive. Just quit lameta, move the project folder, then double-click the .sprj file.

The team working on lameta has furthermore put in a lot of work to make it safer to use lameta in a Dropbox context.

As lameta is still being developed we look forward to hearing your feedback on the latest release!