Ban the Burkini, or, How to Make a Good Muslim

Home/CISD/Ban the Burkini, or, How to Make a Good Muslim

Ban the Burkini, or, How to Make a Good Muslim

France’s burkini bans have reminded us that laïcité today is not just about the separation of church and state. It’s also about actively reconstructing religion in line with state values.

Following the terrorist attack on Nice in July, a number of French towns prohibited the wearing of ‘conspicuously’ religious beachwear, with the full-body burkini worn by some Muslim women being the explicit target. Most of the bans have now been overturned by the courts, but the images of women being forced to remove long clothing by armed police continue to be the source of media furore. 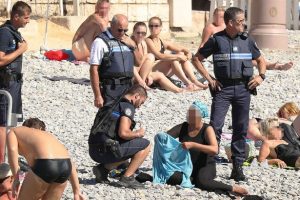 In part, of course, the bans were about the upcoming election, with politicians seeking to woo the right-wing voters currently backing Marine Le Pen. They want to appear tough in response to the security crisis, and also to demonstrate their conformity to France’s highly popular civil religion – the separation of religion from political matters, and the firm relegation of religion to the private sphere.

But more importantly, the bans were another stage in a long struggle among French politicians to build an Islam that is deemed compatible with French republican values – an Islam of France, as opposed to an Islam in France.

As with the bans on the headscarf in schools in 2004 and on face coverings in public spaces (including the niqab and burqa) in 2010, the burkini bans were not just intended to relegate the covering of women to the home. Prime Minister Manuel Valls said that the burkini represents “the enslavement of women” and is a statement of loyalty to an extreme religious identity above loyalty to the French nation. Those who see the burkini as a personal religious choice, or as a means of liberating women from patriarchal expectations of the female body, are simply unenlightened – like “negros who supported slavery”. This is not saying that veiling is acceptable if it is just in the home, but is actively discouraging it, even in private. Muslims must become civilised, on French terms, whether they think they need to or not. Banning the burkini from the public space is part of this wider attempt to push Muslim communities to ‘reform’ and ‘modernise’ their religion.

This follows a long French tradition of attempting to make religious bodies subordinate to the state and subject to its regulation, and individuals loyal to the nation first and foremost before loyalty to a religious community. But the bans on Muslim women’s dress go further than before in demanding the reconstruction of the religion itself. They simultaneously enforce laïcité and go beyond it – they reach into the private sphere in order to reconstruct the religion inside.

Laïcité is revealed here to be more a totemic ideal than a descriptor of reality. It’s imagined nature is not settled but has been negotiated and contested for decades. In practice, for the state today, laïcité is not just about pushing religion into the private sphere: it is about defining and enforcing orthodoxy within the private sphere. Public spaces like beaches are both secularised and sacralised – their imposed secularity is made sacred and in need of protection from religious influence. The beach, like the public school, is now a space for the moral education of Muslims in how to be secular.

This process reinforces a common dualism – between the acceptable and unacceptable Muslim, the Moderate and the Extremist, the Good and the Bad. The Good Muslim here is idealised as keeping her religion firmly within the private sphere; she is vocally loyal to the French regime and upholds the absolute equality of all individuals (including equality between men and women). Those who hold more conservative views on social matters like gender relations and homosexuality, or who want to veil (or want their wives to veil) are not Good Muslims. They may not be Bad outright, but they are in a murky middle. The authenticity of their ‘Frenchness’ is under question.

The French state is pursuing new ways of actively reconstructing the Islam of its Muslims in the light of the attacks in the last year. In schools, parents and children must sign a ‘charter of laïcité’, demonstrating their respect for the sacred principle. The Conseil Français du Culte Musulman (CFCM), founded under government direction in 2003 to act as a representative of Muslim interests to the central government, has plans to oversee the vetting imams and to encourage them to sign a charter which promotes a ‘tolerant’ Islam in line with republican values. French politicians are concerned to sever the influence (and funding) of foreign Muslim states over French mosques – the same concern they had in the 1990s which sparked their original attempts to build an Islam of France. They see the burkini as a visible sign of this continuing foreign influence over French Muslims.

It remains to be seen whether these muscular attempts to build a Good Islam compatible with French values will succeed. That seems unlikely at this stage, considering that the burkini bans have further alienated French Muslims. What is clear is that Muslims will continue to be the cause of political anxiety about the nature of laïcité and how best to enforce it.

Simon Perfect is an Associate Tutor for the MA Muslim Minorities in a Global Context. Follow Simon on Twitter – @SimplyMrPerfect.