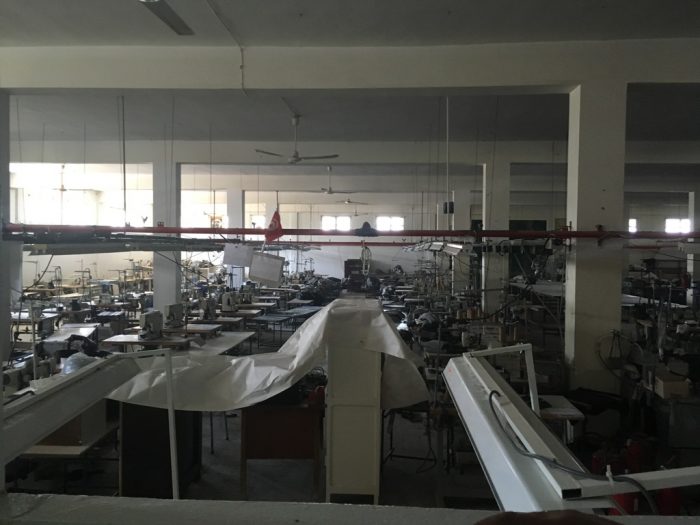 This post is written by Kira Brenner, Doctoral Researcher in the Department of Development Studies at SOAS.

In July of 2018, I met a group of women who had been occupying their former factory for six months, located in an industrial area outside of the tourist city of Monastir, on the central coast of Tunisia. The factory closed in December, and their sit-in began immediately after. They have suffered numerous indignities, both before and after the closing of their factory. They remain in a struggle over lack of payments for work performed. At the time of the factory’s closure, they had been working for three months without remuneration. Only after they began their sit-in did the police arrive with 200 dinar (about £50) for each woman – around a third of what they were owed, and certainly not enough to live on for more than a month or two. The women also did not receive their year-end bonuses, a significant sum that many women rely on to purchase clothing for their children, as well as basic household necessities.

This situation stems from Tunisia’s transition to an export-oriented economic system, which intensified following a Structural Adjustment Programme in 1986. The factory where these women worked opened the following year. Many factories opened following the SAP, as the government gave specific incentives for foreign investors working in export sectors. As in many countries turning to export-oriented development strategies, one of the most common sites for investment was the textile industry.

Tunisia is an attractive site for textile exports, given its easy access to the European market and plentiful supply of cheap labour. Globally, the textile industry is dominated by women, who are seen as being willing to accept lower pay, being more compliant, and having a ‘natural talent’ for sewing. And Tunisia, unlike many other countries in North Africa and the Middle East, has quite liberal laws and traditions regarding women’s employment.

Initially, the Monastir factory paid good wages – 9 dinar a week in 1987, a salary that could support a family. Their jobs were secure, despite the fact that, mainly employing women workers, it was a female-dominated factory in a female-dominated industry and located in Tunisia’s newly-important export sector.

However, even though the Tunisian state, working in concert with the international financial institutions, prioritized these industries, they did not work to make private sector jobs as secure as public sector employment. Private sector jobs frequently do not have any form of social security attached – meaning that private sector employees must pay for their own healthcare and retirement, and have no access to benefits in the case of layoffs or factory closure. Though their children attend publicly funded schools, the conditions immediately surrounding the occupied factory outside Monastir provide little evidence of any government activity—the roads are virtually non-existent, and rubbish lines every inch of them. Evidence of the more prosperous city to the east lies only one kilometre away, in the relatively new metro line connecting the suburbs of Monastir with the city, its many shops, tourist attractions, and picturesque beach.

The women in the factory sit-in have nearly depleted their savings, frequently sacrificing basic necessities. Two of the women involved are diabetic. Neither can afford insulin, let alone the additional costs of a doctor’s visit and blood work. Food is in short supply, though they are more than willing to share their meagre rations with a stranger. Comradery is quite strong among the women, who alternate days and nights occupying the factory, along with their children. They are able to maintain a pleasant and optimistic atmosphere, despite the bleak circumstances.

Though these women are all nominally members of Tunisia’s largest, and until 2011 only legal, trade union, the Union Générale Tunisienne de Travail (UGTT), they have received no support from the UGTT. The lack of support shown to these women belies the union’s lack of interest in seriously organising in the private sector, particularly in the female-dominated textile export industry.

One of the reasons the UGTT may have been disinclined to organise this factory is the high level of temporary workers. Following the 1992 Mise à Niveau programme, business owners exploited a change in the labour law which allowed employers to hire workers on long-term temporary contracts. Like in most places with a female-dominated textile export industry, most of these long-term temporary contracts went to women.

It is interesting to compare these women’s struggle with recent scholarly work into the struggles of precarious workers in male-dominated sectors of the Tunisian economy. According to Feltrin (2017), unemployed graduates in the Kerkennah Isles were supported in their direct actions against unemployment by the local branch of the UGTT, and garnered wide support from civil society organisations, as well as significant community support. While the women in the factory sit-in have used similar tactics (occupation, road closures, protests in front of government offices), their support comes exclusively from the Front Populaire (FP), a coalition of leftist political parties, and the Forum Tunisien pour les Droits Economiques et Sociaux (FTDES), an organisation which aims to improve coordination between social movements. While this support is appreciated, neither the FP nor the FTDES have the same level of influence within the Tunisian government that the UGTT does, nor the ability to direct resources to the women occupying the factory.

The situation of the women in the Monastir factory raises significant questions about newly-democratic Tunisia’s commitment to good jobs and dignity, two things that motivated many participants in the 2011 Arab Spring, which ousted Tunisia’s long-time authoritarian leader. As Tunisia continues to struggle with economic instability, growing inflation, and continuing IMF-mandated austerity programmes, and as street protests continue to manifest over the rapidly decreasing standard of living, these questions should be front and centre for research into Tunisia’s political economy.