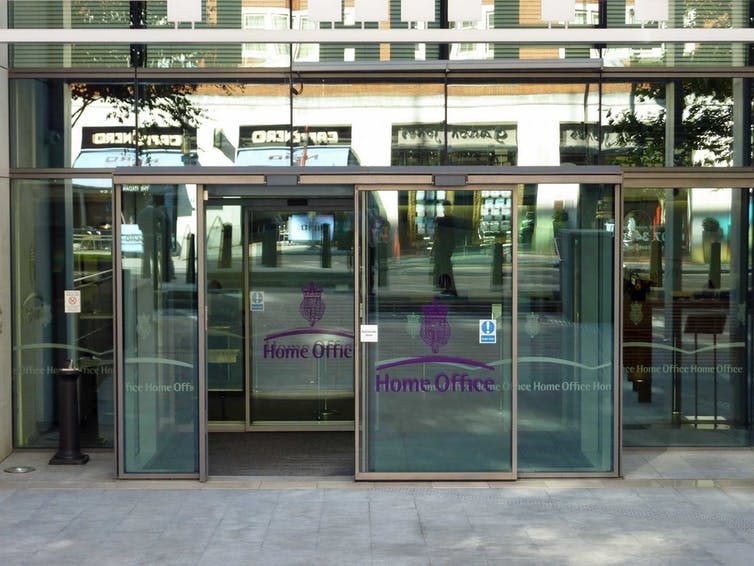 The Home Office: keeping people detained when they could be released.
Steph Gray/flickr, CC BY-SA

This post is written by Anna Lindley, Senior Lecturer in Migration, Mobility and Development at SOAS, and Clara Della Croce, Senior Teaching Fellow in the School of Law at SOAS. This article is republished from The Conversation under a Creative Commons License. Read the original article.

In 2018, a series of ostensibly obscure tweaks were made to the mechanisms for accessing public accommodation. Before the changes, people held in immigration detention centres who applied for bail but had no friends or family to live with on release, could apply for publicly-funded accommodation.

But under provisions introduced in 2018, the scope for obtaining accommodation shrank dramatically, in a climate of public housing austerity and hostile immigration policy. This has created an appalling situation where people remain trapped in detention despite being given bail.

In a ruling in early February 2019, a high court judge acknowledged that the bail accommodation system had been shown “not to work”.

Administrative incarceration is supposed to be only used for people whose removal is imminent and where there are strong legal grounds for depriving them of their liberty – not for accommodating people. The consequences of this erosion of the right to liberty are a real cause for concern for anyone who cares about human rights and social exclusion in contemporary Britain.

Examples of people who have fallen victim to the changes are abundant. One NGO worker detailed the case of Yusuf*, a failed asylum seeker from central Asia with acute mental health issues. After being detained for three months, Yusuf was granted bail by a judge but had no address that he could be released to. When he phoned to apply for Home Office accommodation he was told that, since he was in detention, he didn’t qualify, as he was not currently destitute.

With the NGO worker’s help, Yusuf filled in a long form for asylum support. In this case, the Home Office did officially grant him accommodation, indicating that he was considered a priority because he was recognised as a vulnerable person. But no actual physical address was found for him to be released to until the Home Office was ordered to find one following a successful judicial review – almost three months after he was granted bail.

Although the Home Office is only supposed to detain somebody in immigration detention when it can remove them within a “reasonable period”, it’s unclear what reasonable actually means. There is currently no time limit on immigration detention in the UK, despite ongoing campaigning to introduce one. Many people cannot be removed promptly due to legal or logistical barriers – for example if they have an outstanding legal claim to remain in the UK on asylum or other human rights grounds, or if they don’t have the necessary travel documents.

Since 2015, annual government data consistently shows that more than half of those held in immigration detention were eventually released from detention, rather than removed from the UK. Detainees can be released on immigration bail by the secretary of state or by a judge of what’s called the first tier tribunal. Tribunal bail, despite various deficiencies, remains a key route to release.

Tribunal judges expect people to have a “stable address” if released on bail, though the person is no longer automatically required to live at the address, as long as they can be reliably contacted there.

A problem arises when bail applicants don’t have friends or family able to host them. Since January 2018, the new bail regime now makes it much harder for people to secure public accommodation from inside detention. Asylum seekers and refused asylum seekers can still apply, using a cumbersome 35-page application form. Currently, such applications are often being refused, with the government arguing that people in detention fail the “destitution test”, which requires them to demonstrate that they are destitute or likely to become destitute within 14 days.

In June 2018, the charity Bail for Immigration Detainees (BID) reported about the case of an asylum seeker detained for ten months, who had obtained conditional bail with a residence condition. On applying for accommodation, the person was told that in the detention centre: “Your essential living needs, including accommodation, are being met in full.” The person was later told that administrative detention is: “Not dissimilar to emergency accommodation with lack of liberty being the main difference.”

The situation is even worse for those who have not made an asylum application, but may have other family-related human rights claims to remain in the UK. Officially the Home Office has the power to provide accommodation in such cases in “exceptional circumstances”, but there is no official application form people can use, and requests are regularly refused.

Lack of accommodation is turning into a major blockage at bail hearings, as judges are reluctant to release detainees to the streets. A key part of judges’ considerations in bail hearings is to assess whether someone will be able to comply with reporting requirements and work restrictions if they are going to be destitute when released. People who find themselves homeless on release can be re-detained for breaking these kinds of bail conditions.

Read more:
Work ban forces asylum seekers into destitution – but we now have a chance to change this policy

At present, many people are granted bail by judges, subject to the Home Office providing accommodation – often within 14 days. Yet, the Home Office is ignoring these requests from the tribunal, meaning that often the initial grant of bail lapses and the person remains in detention. NGO workers are reporting that this situation even puts some people off applying for release. Meanwhile, BID reported cases where the Home Office itself released people onto the streets – sometimes the same people for whom it has opposed bail only days before.

It is hard to get a grasp of the scale of the problem from government statistics. However, the largest detention legal aid solicitors firm, Duncan Lewis, reported clients confronting refusals of accommodation, or delays of months, on a daily basis.

The depth of the harm caused is considerable. These accommodation blockages result in continued incarceration of people who should not be detained, against well-established evidence regarding the devastating, often lifelong damage that indefinite detention can cause to people’s mental and physical health. Many people enter detention sound of mind and leave with mental health issues.

If detention is being prolonged because of lack of accommodation, even for a matter of days, the Home Office may be breaking the law. If detention is not for the purposes of preventing unauthorised entry or effecting removal, it’s incompatible with Article 5 of the European Convention on Human Rights. It’s unacceptable that a person is deprived of their right to liberty because of a lack of resources or cumbersome practices on the part of the Home Office or its agencies. For example, in a recent case, the Home Office refused to house a former detainee in the north east for social cohesion reasons.

This nexus between detention and destitution arose from a series of ostensibly obscure tweaks to the immigration bail regime, dismantling earlier provisions which sensibly facilitated successful tribunal bail applicants’ transition from detention into public accommodation. The new provisions attack the human rights of people already made vulnerable by the immigration system, either prolonging detention or forcing them into destitution.

*Names have been changed to protect anonymity.