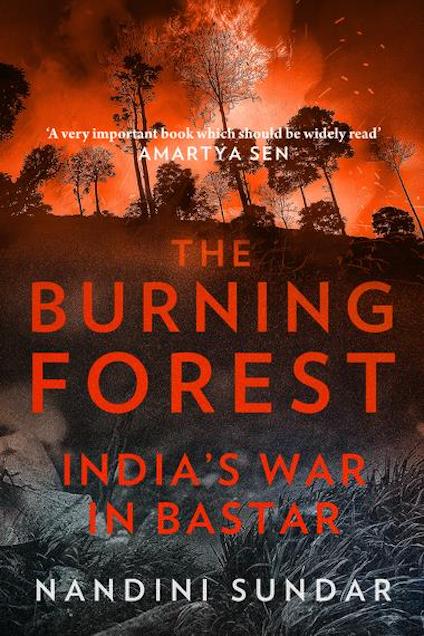 This post is written by Christian Lund who is Professor of Development, Resource Management, and Governance, at the Department of Food and Resource Economics, at Copenhagen University.

Terror is at the heart of war. The ongoing war in Bastar between the Indian government and the armed guerrillas of the Communist Party India (Maoist), or Naxalites, demonstrates this only too clearly. The weakest and most vulnerable group in the conflict, the adivasis (scheduled tribes), have suffered atrocities that never make it to the glossy Brand India billboards. The adivasis have been marginalised and kept in abject poverty through history to a greater degree than any other section of the Indian population. The colonial government had appropriated Indian forests, and while many people continued to reside in and depend on them, they did so, at best, as tolerated squatters on government land. Over time, competing interests for land, forests, and minerals, cloaked in discourses of nationalism, development, and law-and-order, as well as systematic and institutionalized vilification of the indigenous population, have worked to dispossess them of land, dignity and life itself.

Nandini Sundar provides a detailed and harrowing account of the contemporary history of this conflict. The Burning Forest also points to a problem that reaches far beyond India. While states may be more or less successful in destroying those that they cast as internal enemies, they often self-destruct and fragment in the process. States that claim to be democratic further compromise their purported ideals and integrity as citizenship rights are hollowed-out. This is a story about resource frontiers and dispossession, and about the conundrum of democracy: how to protect the interests of the inarticulate minority against the violent avariciousness of the many, who, in the name of their numbers, eclipse the prospects of the few.

The Naxalite movement began in the 1960s as a peasant struggle in Naxalbari, West Bengal. The Indian state crushed the movement in the 1970s, but since then various splinter groups have spread across the hilly tracts of east-central India – including to Bastar in 1979. The Naxalites initially focused on making existing institutions work for the adivasis, rather than establishing a parallel state. Most issues revolved around government institutions’ neglect and abuse of the population living in the forest. The Naxalites intimidated foresters and contractors who paid less than the minimum wage, teachers and health workers who neither taught nor cured, as well as land revenue officials and police who demanded bribes for routine administrative work. Later on, the Naxalites began to implement land reform, forcing larger landholders to give up their land to smallholders. With the help of the Naxalites, adivasis settled in new villages in the forest and redistributed land in the more settled villages. Over time, they set up their own parallel political structures, displacing traditional headmen and elected village representatives. This intensified the social conflicts and drew in police and security forces. While Sundar documents a great deal of popular support for the Naxalites, she also shows that paternalism and coercion were part and parcel of the Naxalite Maoist state. Informers – real and suspected – were killed, and discipline and justice was that of an underground movement.

In the early 2000s several major events escalated the violence. The State of Chhattisgarh (including Bastar) was carved out of Madhya Pradesh in 2000. New mineral resources were identified, and the national mining laws were liberalized in 2003. In 2005 the state government engineered and armed a ‘spontaneous popular resistance’ against the Naxalites in the form of a vigilante force known as Salwa Judum (literally, ‘purification hunt’) drawn from among migrants to the area.

The Salwa Judum operation produced a regime of terror intended to clear adivasis from the land. The local population suffered systematic rape, arson, and violence, and were given an impossible choice: move to so-called ‘relief camps’ to be brutalized and abused by vigilantes in the name of ‘protection’, or remain clandestinely in the forests and be considered Maoist vermin. In 2007, being finally allowed to leave the camps, many returned to their charred villages only to see what they considered their land now treeless and exploited under different mining leases. The adivasis’ absence had made the take-over easy. At the same time, non-adivasis had moved to the new state of Chhattisgarh in large numbers. They saw the adivasis as ‘backward and incapable of fully utilizing the advantages of the area’ (p. 40), and broadly supported the counter-insurgency. Settlers occupied the bureaucracy, controlled trade, and formed a vocal political constituency demanding a railway line, mining, and industrialization. Periodic arrests of Maoist sympathizers, and retaliatory kidnappings of government officials by Maoists compounded an atmosphere of imminent arbitrary violence.

The final section of the book changes gears and produces an indictment of India, her oft-hallowed democratic institutions of welfare, legislation and justice, as well as the media and civil society. In 2009 the national Indian government initiated development programmes in some of the areas populated by Naxalites. However, this attempt to wean the adivasis off the Maoists did not work well. Funds were siphoned off in the name of security and the Maoists opposed and obstructed the programme.

The adivasis’ access to formal politics has been equally obstructed. Naxalites have generally enforced boycotts of the elections. At the same time, mainstream politicians underhandedly trade mining leases for financial support to their campaigns. The result was political marginalisation of the adivasis and a widespread fire-sale of their land. Meanwhile the adivasis have little voice in parliamentarian politics because the big political parties entertain a consensus with the national security establishment that the insurgency is the biggest internal security threat to the Indian state.

The media and civil society organisations in India are split on the issue, but with preponderant support for the government line of development of the country’s natural resources and counter-insurgency against the Naxalites. Anyone who voices any concern for the adivasis is branded as Maoist by the mainstream media and Hindu nationalist militants, and thereby de-legitimated in public debate. Nonetheless, a diverse group of individuals, student unions and adivasi organisations has persevered. The Indian legal system offers the possibility of Public Interest Litigation, and three leading Indian intellectuals (including the author) filed two cases against the State of Chhattisgarh and the Union of India in 2007.

By 2011, the Supreme Court ruled in favour of the plaintiffs and against the counter-insurgency operation, Salwa Judum. Rather than falling into line, the political and economic alliance between the State Government, local politicians, Hindu nationalists, timber merchants, and the mining industry was sufficiently strong to embolden the State Government to completely disregard the ruling. The last ominous entry in the book’s time-line reads: ‘2016: Police-sponsored vigilante groups…intimidate and drive out journalists, researchers, lawyers and activists’ (p. 381).  Supreme Court rulings can apparently be flouted with impunity.

The story of Bastar, Sundar argues, is the story of all places, ‘where indigenous people give and keep giving, and are rewarded with mining dust, harsh and treeless landscapes, and the stink of death’ (p. 220). The author skirts the issue of internal differentiation and enrichment within and among indigenous peoples, but her general argument has traction in too many places: Aceh, the Arctic, Australia, Bolivia, Botswana, Brazil, Cambodia, Chiapas, Congo and so on.

If many places are like Bastar, few books are like The Burning Forest. The book is replete with images of life and its destruction in Bastar; with processes of dehumanization through plunder, rape, and terror by harrying bands of security forces, and so-called ‘special police officers’ recruited among settler youths and the area’s lumpen muscle. Even in countries with democratic and progressive constitutions, the cards are often stacked against the vulnerable, and rights are enshrined but not enjoyed. The book thereby demonstrates some generic features of the political economy of states. What we call the state is made up of some thousand-and-one institutions with varying degrees of relative autonomy. The very detailed account of political and institutional wrangling does more than document events; it demonstrates how the porosity of the state complex creates conditions for resilient hegemonic constellations with a dynamic metabolism of resource access, political elections, populist politics, law, and force. It shows how governments can deliberately and selectively suspend their own territorial sovereignty and promote an unregulated process of violent dispossession, only to ‘return’ later to confirm a new body of right holders. However, the same porosity also leaves open conduits for critique and resistance, slender as they may seem. This is the book’s important contribution beyond the specifics of its material, and it resonates with classics on violent frontiers and dispossession . The juggernaut of resource prowling capitalism may produce the nations’ fetishized middle-classes but not without crushing so-called ‘backward’ people and their worlds along the way.

Some may argue that Sundar’s personal involvement in the conflict prevents her from being objective. They will be scratching where it does not itch. Scholarly inquiry is not objective as such; it has objectives, i.e. certain concerns it wants to investigate. The Burning Forest is a full-bodied, detailed chronicle of an injustice that the powerful wish to consign to oblivion. Its objective is to shed uncomfortable light on a crime for especially the Indian public, and the book thereby becomes a part of its own content. Anger fuels her work, yet, Nandini Sundar’s 400-page j’accuse is conveyed by a measured timbre of defiant commitment. It deserves the widest readership.