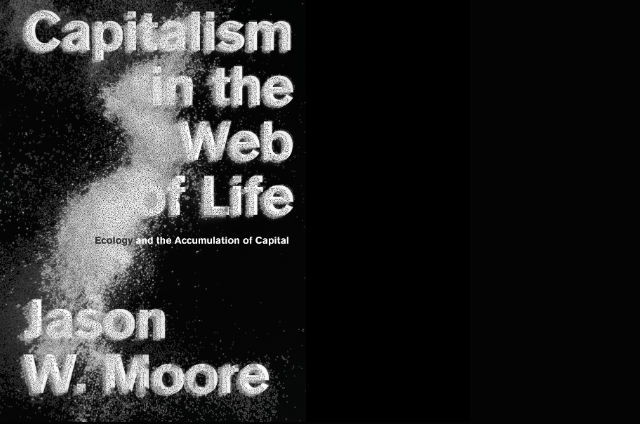 This book has been keenly awaited by those who have followed Jason Moore’s sequence of extraordinary articles over the last 15 years or so, some of which have appeared in the Journal of Agrarian Change.

Moore’s book is not an easy read. This is not because it is not clearly written, which it is (though a few passages still elude me), but because of the massive challenges the author has set himself, and therefore his readers. While a follower of his work over the years, it has taken me some time to separate and outline the five main ingredients of the book, and in a fashion that inevitably omits much of interest and provocation. It seemed to be a good use of my effort in assembling (and trying to connect) those main ingredients to share them with others as a kind of guide to engaging with this book which is evidently one step, albeit a very big one, in what is a continuing (monumental) work in progress. It leaves me with many issues and questions which will continue to stimulate and exercise me, several of which I indicate briefly here.

A first concerns Moore’s formulations of the oikeios, the ‘bundling’ of human and extra-human nature, their ‘co-production’ of the web of life, and the like. One understands his emphasis on the need to move beyond persistent conceptions of social relations qua ‘humans without nature’, but there remain issues of human, which is to say social, ‘species-specificity’. Are these best served by some of the ways in which Moore’s notions of ‘co-production’ and indeed ‘agency’ are put to work? For example, ‘humanity/environments’ as  two [equivalent?] ‘acting units’ (p.28);  ‘agency’ as ‘a relational property of specific bundles of human and extra-human nature’ (p.37); ‘diseases, or climates, or plants make history as much as any empire’ (p.48); ‘the historical agency of extra-human natures as internal to capitalism’s crises’ (p.86); and geology as ‘at once object and subject’ (p.179). My question is simply this: if ‘agency’ suggests intent, can extra-human nature be considered to have ‘agency’? Does it have ‘projects’ as capital does (and as other social formations, groups, classes do)? When Moore points to ‘the distinctiveness of humans (among many other species)’ (p.300), should this be reformulated as ‘the distinctiveness of humans from all other species’? In short, the difference between the ‘worst of architects’ and the ‘best of bees’ as Marx put it?

Something of the ambiguity that may lurk here carries over to a second (constitutive) distinction in Moore, namely the bracketing together of non-commodified human labour and extra-human ‘work/energy’ in his theorization of appropriation and its centrality to the accumulation of capital. Non-commodified human labour within capitalism carries a long legacy of materialist debates, from primitive accumulation through Rosa Luxemburg’s model of imperialism to domestic and other (non-market) reproductive labour. Again, I wonder whether advance on the issues generated by such debates is best served by lumping together the human and non-human non-commodified, as Moore does. Indeed, might his account of early capitalism, and of the relation between accumulation and non-commodified labour more generally, benefit from the potent distinction made and applied by Jairus Banaji between mode of production as law of motion of a historical epoch (the thrust of Moore’s ‘systemic’ account) and as form of organization of labour regimes and processes? This, as well as Banaji’s and others’ reflections on wage labour might provoke some further consideration of Moore’s (too?) encompassing notion of non-commodified labour, including whether it may indeed be commodified in important if ‘invisible’ ways in different places and times of capitalist world-ecology.

This issue further carries over into Moore’s apparent adherence to the (vaguely Luxemburgist) claim of Wallerstein and some other world-system theorists that commodified (wage) labour is the exception in world capitalism rather than the norm, represented by non-commodified labour. For example, ‘fully proletarian households are quite rare in capitalism, even today’ – and even though ‘the world proletariat doubled after 1989’ (principally in Russia and China, p.237) – and ‘we are dealing with relative degrees of unpaid work, shifting configurations of paid and unpaid work in the “semi-proletarian household”’ (p.223; though see also p.300). Does this resonate too rigid (‘stereotypical’, in Lenin’s term) a notion of the ‘proletarian’ qua ‘full-time’, ‘permanently’ employed wage-worker, hence expanding the ranks of the ‘semi-proletarian’ to buttress the centrality of non-commodified human labour to appropriation and the ecological surplus? This question touches on one of the widest debates about the social character of classes of labour in capitalism today. It also – ‘relative degrees of unpaid work’ – suggests further difficulties in assessing the weight of different components of the ecological surplus at any given time, and indeed whether it is rising, falling or stagnating.

Maybe there is some connection between these formulations of Moore and the place of class, and class struggle, in his account which is strongly signalled and occasionally briefly illustrated, if not pursued in any depth.  In a (very) brief consideration of ‘Towards a Socialist World-Ecology?’ near the end of the book, Moore writes that it can only be followed through class struggle – but a class struggle understood as a contest over the configuration of the oikeios. This is class struggle understood as the relation of production and reproduction, of power and wealth in the web of life. (p.287)

One of his principal examples is struggles over food justice and food sovereignty, spearheaded by movements like Vìa Campesina (with the Nyéléni Declaration cited at length, 289), albeit he comments that ‘To be sure, the struggle over food is more than a class struggle’ (p.287). Some might be tempted to say ‘less than a class struggle’, which is too dismissive. That we may have to rethink inherited notions of class struggle, or more broadly social struggle, in the conditions of contemporary capitalism, and what  ‘capitalist world-ecology’ can contribute to that most demanding of tasks, should be open questions.

Capitalism in the Web of Life is required reading for all those with an interest in the patterns of development of agriculture in capitalism, both historical and contemporary. And indeed, an interest in where, when, how and why those agrarian patterns fit in the development of capitalism more generally, what that can tell us about the present, and how it can inform our views of the future.