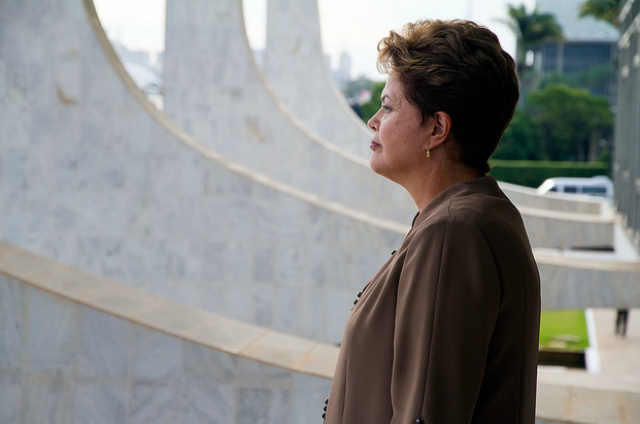 Alfredo Saad Filho is Professor of Political Economy at the SOAS Department of Development Studies. His research interests include the political economy of neoliberalism, industrial policy, alternative macroeconomic policies, and the labour theory of value and its applications.

The judicial coup against President Dilma Rousseff is the culmination of the deepest political crisis in Brazil for 50 years.

Every so often, the bourgeois political system runs into crisis. The machinery of the state jams; the veils of consent are torn asunder and the tools of power appear disturbingly naked. Brazil is living through one of those moments: it is dreamland for social scientists; a nightmare for everyone else.

Dilma Rousseff was elected President in 2010, with a 56-44 per cent majority against the right-wing neoliberal PSDB (Brazilian Social Democratic Party) opposition candidate. She was re-elected four years later with a diminished yet convincing majority of 52-48 per cent, or a difference of 3.5 million votes.

Dilma’s second victory sparked a heated panic among the neoliberal and US-aligned opposition. The fourth consecutive election of a President affiliated to the centre-left PT (Workers’ Party) was bad news for the opposition, among other reasons because it suggested that PT founder Luís Inácio Lula da Silva could return in 2018. Lula had been President between 2003 and 2010 and, when he left office, his approval ratings hit 90 per cent, making him the most popular leader in Brazilian history. This threat of continuity suggested that the opposition could be out of federal office for a generation. They immediately rejected the outcome of the vote. No credible complaints could be made, but no matter; it was resolved that Dilma Rousseff would be overthrown by any means necessary. To understand what happened next, we must return to 2011.

Dilma inherited from Lula a booming economy. Alongside China and other middle-income countries, Brazil bounced back vigorously after the global crisis. GDP expanded by 7.5 per cent in 2010, the fastest rate in decades, and Lula’s hybrid neoliberal-neodevelopmental economic policies seemed to have hit the perfect balance: sufficiently orthodox to enjoy the confidence of large sections of the internal bourgeoisie and the formal and informal working class, and heterodox enough to deliver the greatest redistribution of income and privilege in Brazil’s recorded history. For example, the real minimum wage rose by 70 per cent and 21 million (mostly low-paid) jobs were created in the 2000s. Social provision increased significantly, including the world-famous Bolsa Família conditional cash transfer programme, and the Government supported a dramatic expansion of higher education, including quotas for blacks and state school pupils. For the first time, the poor could access education as well as income and bank loans. They proceeded to study, earn and borrow, and to occupy spaces, literally, previously the preserve of the upper-middle class: airports, shopping malls, banks, private health facilities and roads, with the latter clogged up by cheap cars purchased on 72 easy payments. The Government enjoyed a comfortable majority in a highly fragmented Congress, and Lula’s legendary political skills managed to keep most of the political elite on side.

Then everything started to go wrong. Dilma Rousseff was chosen by Lula as his successor. She was a steady pair of hands and a competent manager and enforcer. She was also the most left-wing President of Brazil since João Goulart, who was overthrown by a military coup in 1964. However, she had no political track record and, it will soon become evident, lacked essential qualities for the job.

Once elected, Dilma shifted economic policies further away from neoliberalism. The Government intervened in several sectors seeking to promote investment and output, and put intense pressure on the financial system to reduce interest rates, which lowered credit costs and the Government’s debt service, releasing funds for consumption and investment. A virtuous circle of growth and distribution seemed possible. Unfortunately, the Government miscalculated the lasting impact of the global crisis. The US and European economies stagnated, China’s growth faltered, and the so-called commodity super-cycle vanished. Brazil’s current account was ruined. Even worse, the US, UK, Japan and the Eurozone introduced quantitative easing policies that led to massive capital outflows towards middle-income countries. Brazil faced a tsunami of foreign exchange, that overvalued the currency and bred deindustrialisation. Economic growth rates fell precipitously.

The Government doubled its interventionism through public investment, subsidised loans and tax rebates, which ravaged the public accounts. Their frantic and seemingly random interventionism scared away the internal bourgeoisie: local magnates were content to run Government through the Workers’ Party, but would not be managed by a former political prisoner who overtly despised them. And her antipathy was not only resesrved for the capitalists: the President had little inclination to speak to social movements, left organisations, lobbies, allied parties, elected politicians, or her own ministers. The economy stalled and Dilma’s political alliances shrank, in a fast-moving dance of destruction. The neoliberal opposition scented blood.

For years, the opposition to the PT had been rudderless. The PSDB had nothing appealing to offer while, as is traditional in Brazil, most other parties were gangs of bandits extorting the Government for selfish gain. The situation was so desperate that the mainstream media overtly took the mantle of opposition, driving the anti-PT agenda and literally instructing politicians what to do next. In the meantime, the radical left remained small and relatively powerless. It was despised by the hegemonic ambitions of the PT.

The confluence of dissatisfactions became an irresistible force in 2013. The mainstream media is rabidly neoliberal and utterly ruthless: it is as if Fox News and its clones dominated the entire US media, including all TV chains and the main newspapers. The upper-middle class was their obliging target, as they had economic, social and political reasons to be unhappy. Upper-middle class jobs were declining, with 4.3 million posts paying between 5 and 10 minimum wages vanishing in the 2000s. In the meantime, the bourgeoisie was doing well, and the poor advanced fast: even domestic servants got labour rights. The upper-middle class felt squeezed economically, and excluded from their privileged spaces. It was also dislocated from the state. Since Lula’s election, the state bureaucracy had been populated by thousands of cadres appointed by the PT and the left, to the detriment of ‘better-educated’, whiter and, presumably, more deserving upper-middle class competitors. Mass demonstrations erupted for the first time in June 2013, triggered by left-wing opposition against a bus fare increase in São Paulo. Those demonstrations were fanned by the media and captured by the upper middle-class and the right, and they shook the Government – but, clearly, not enough to motivate them to save themselves. The demonstrations returned two years later. And then in 2016.

Now, reader, follow this. After the decimation of the state apparatus by the pre-Lula neoliberal administrations, the PT sought to rebuild selected areas of the bureaucracy. Among them, for reasons that Lula may soon have plenty of time to review and to regret, the Federal Police and the Federal Prosecution Office (FPO). In addition, for overtly ‘democratic’ reasons, but more likely related to corporatism and capacity to make media-friendly noises, the Federal Police and the FPO were granted inordinate autonomy; the former through mismanagement, while the latter has become the fourth power in the Republic, separate from – and checking – the Executive, the Legislature and the Judiciary. The abundance of qualified jobseekers led to the colonisation of these well-paying jobs by upper-middle class cadres. They were now in a constitutionally secure position, and could chew the hand that had fed them, while loudly demanding, through the media, additional resources to maul the rest of the PT’s body.

Corruption was the ideal pretext. Since it lost the first democratic presidential elections, in 1989, the PT moved steadily towards the political centre. In order to lure the upper-middle class and the internal bourgeoisie, the PT neutralised or expelled the party’s left wing, disarmed the trade unions and social movements, signed up to the neoliberal economic policies pursued by the previous administration, and imposed a dour conformity that killed off any alternative leadership. Only Lula’s sun can shine in the party; everything else was incinerated. This strategy was eventually successful and, in 2002, ‘Little Lula Peace and Love’ was elected President. (I kid you not, reader: this was one of his campaign slogans.)

For years the PT had thrived in opposition as the only honest political party in Brazil. This strategy worked, but it contained a lethal contradiction: in order to win expensive elections, manage the Executive and build a workable majority in Congress, the PT would have to get its hands dirty. There is no other way to ‘do’ politics in Brazilian ‘democracy’.

We only need one more element, and our mixture will be ready to combust. Petrobras is Brazil’s largest corporation and one of the world’s largest oil companies. The firm has considerable technical and economic capacity, and it was responsible for the discovery, in 2006, of gigantic ‘pre-salt’ deep sea oilfields hundreds of miles from the Brazilian coast. Dilma Rousseff, as Lula’s Minister of Mines and Energy, was responsible for handling exploration contracts in these areas including large privileges for Petrobras. The enabling legislation was vigorously opposed by PSDB, the media, the oil majors and the US Government. Read more.

To continue reading this post please visit Brasil Wire (where it was originally posted).