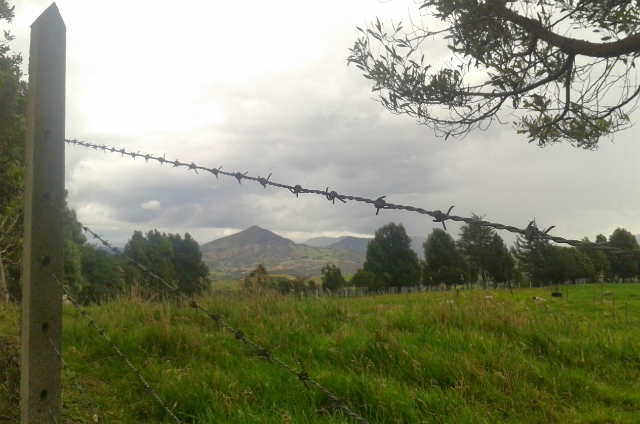 Bordering the Andes photo by the author.

Paolo Novak is a lecturer in the SOAS Department of Development Studies. His research develops at the intersection of borders, migration and development studies, and is concerned with the geography and spatiality of development; border management and interventions; the figures of the migrant and the refugee.

Whether you agree or disagree with Etienne Balibar‘s proposition that “borders are everywhere”, border-related workshops certainly are. This is unsurprising as most, if not all, news captivating the public imagination over the last few years have been directly related to borders. This includes the migration emergency across the Mediterranean, in Mexico, in South East Asia, as well as the long standing border demarcation disputes across Africa, or the de facto, if not de jure, re-drawing of borders in Ukraine and the Middle East. It encompasses the multiplication of fences and walls in the Arabian peninsula, in South Asia, in Turkey and in the Balkans., as well as  the on-going and relentless opening up of borders to capital, and its implications for current and past economic and financial crises, dispossession and exploitation. It also includes the stories of the everyday lives of people threading borders and of the much-needed resistance, contestation and refusal acts of many activists. Together these are just a few of the headlines that have prompted us all to think about borders more deeply. As world configuring institutions, all the tensions and contradictions associated to the current global conjuncture are necessarily expressed, and heightened, through borders.

Workshops are a conventional format for the production of academic thought, and it seems all too natural that borders are ever more scrutinised in such events, across disciplines and regional contexts. Last year, I was lucky enough to attend several such gigs. In Portland, I explored the ways in which borders can be used to interrogate migration and development literature, at the Association of Borderland Studies Annual Meeting. At the 2015 ISS-GNU International Conference in Jinju, I assessed the epistemological implications of conceiving migrants as “migrant labour” or, alternatively, as “labour migrants”. I learned about South East Asian borderlands, frontiers and conflict, at the workshop organised by Jonathan Goodhand, in Melbourne. In Addis Ababa, I participated in the 2nd Colloquium on African Borders organised by the AUBP, which was concerned with demarcation and gender mainstreaming. In Palermo, I debated possible responses to the death of thousands of people across the Mediterranean with a network of European scholars. I also attended and presented at numerous events, seminars and workshops in London.

The first consideration that emerges from these events is a confirmation that borders are a product of, and reproduce, social relations cutting across all domains of social life. Borders are dynamic social processes that spread across society, as Anssi Paasi suggests, and their significance reverberates across multiple scales and in a multiplicity of directions. Indeed, border discussions in these events were set in relation to contexts as varied as migration, citizenship and the contestation of the EU borders regime, peace, security and conflict, socialist alternatives to capitalist economic models, border guards’ capacity building, gender relations and everyday life.

Yet, despite the common concern with “workshopping borders”, the second consideration emerging from these workshops is the profoundly divided nature of the academic field concerned with the study of borders. On one side, the literature explored, questions raised, and the epistemological perspectives deployed across these events, could not be more different. Indeed, as I argue elsewhere [i], the field is fundamentally divided between those who attempt to construct knowledge about borders through comparative field-based studies, and those who attempt to explain borders on the back of broader theories of social bordering, whether these are of a Marxist, postcolonial or any other inclination. On the other side, the profound divisions characterising the field were also evident in terms of the heterogeneous political stances of scholars involved. Whether concerned with human rights and FRONTEX (the European border management agency) operations, the amelioration of current border management practices in the context of state-led cross-border cooperation, ‘no border’ activism, proletarianisation and social reproduction, the various “policy recommendations” emerging out of each of these workshops were hardly in conversation with each other.

Put differently, as they were alternatively concerned with borderlines, borderlands, border management, border crossing experiences, or borders functions, a sense of a common object of study hardly emerged from these events. This is a pity, analytically, as the field is vibrant and sophisticated, and its intellectual outcomes would immensely benefit from a more extensive dialogue across different epistemological strands. This is a pity also in a political sense. As eloquently suggested by Subir Sinha and Rashmi Varma, the current global conjuncture imposes a renewed urgency for a critical inquiry that benefits from productive engagements and moves beyond epistemological impasses. Indeed, contemporary border dynamics require critical political platforms that can only be formulated through such dialogues.

Interesting considerations also emerge from the opposite trajectory – that is, using Border Studies literature to interrogate these workshops. In fact, almost every reference in the reading list of my course could be used for such purpose. As mentioned above, border (workshops) both unite and separate the field, as they simultaneously function as barriers and bridges, resources and symbols of identity, for the various epistemic communities involved. They are ports of entry for the academic community, where people and commodities step up and down in value as they move across them. Through border (workshops), “the global movement of homogenized, abstract (academic) labour is finally embodied in the restless life and death of labour in a rather more “concrete” form – which is to say, actual (academic) migrant working men and women”. Indeed, Placing Border (workshops) in Everyday Life, facilitates the identification of the individuals and organizations that engage in border work at a range of scales and places. OK, I may be stretching the argument a bit too far.

Without doubt, however, much like borders themselves, border workshops reproduce the social cleavages characterising society. However radical their insights or politics may be, they rely on people being able to travel across borders, to pay for airfares, to spend time reading about and reflecting upon issues that the majority of us only glimpse through headlines. However progressive they may be, their internal dynamics are always already gendered and racialised. Much like borders, and indeed much like any other institution, in other words, border workshops reproduce chromatic boundaries defined by the intersection between the colours of passports, of skins, of currencies -much as they attempt to challenge them. From this perspective, borders are indeed everywhere, as the social order they attempt to assert reverberates, capillarily, in place-specific and embodied ways.

The next few months are likely to bring more workshops and more travel, as I am trying to join border workshops in China, Finland, Italy and the US. Considering the CO2 emissions for which I am responsible, I am happy, in a hypocritical way, that the field of Border Studies has not yet taken environmental concerns seriously.

[ii] Novak P., Back to Borders Critical Sociology, Special Issue “Marxism and Postcolonial Theory: What is Left of the Debate?“, forthcoming