Women’s Rights and the Arab Uprisings

Women’s Rights and the Arab Uprisings 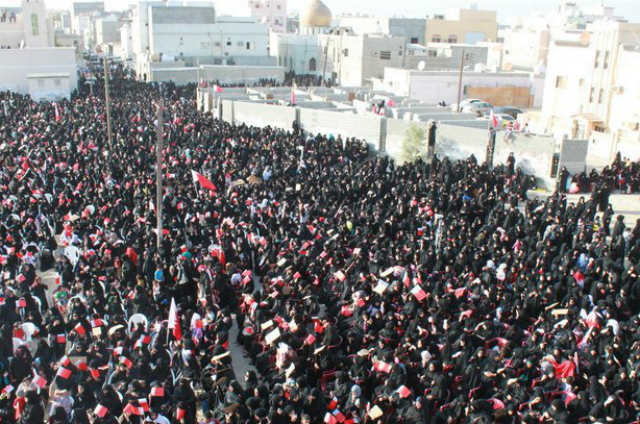 Women taking part in a pro-democracy sit-in in Sitra, Bahrain. Photo from Bahrain in Pictures via Wikimedia.

Ahlem Belhadj is a practitioner and teacher of child psychiatry in Tunisia. She co-founded the Coalition for Sexual and Corporal Rights in Muslim Societies and won the 2012 Simone de Beauvoir Prize. She has authored several books on child psychiatry, the abuse of children and women and women’s rights. She has also been described as ‘The Arab Spring’s Tunisian Heroine’.

In December 2015 Ahlem Belhadi gave a lecture in the SOAS Department of Development Studies Globalisation Lectures series entitled ‘Women’s Rights and the Arab Uprisings’, which you can watch in full online. This blog post has been prepared by Joanne Tomkinson on the basis of Dr Belhadj’s lecture notes, and has not been revised by her. She will shortly publish an article on the theme of her lecture.

In the five years since the ‘Arab Spring’ there have been intense political changes in the region. They have been years of hope and struggle, but also of fear and insecurity. The engagement of Arab women in the call for liberty, dignity equality and social justice, and a world free from discrimination and violence, has been amazing. As such, social and gender relations must be at the centre of any appraisal of the ongoing process. So are women the principal losers of the upheaval as many pretend?

To understand these issues we must look at the fate of women’s rights in constitutional processes, the issue of violence against women, the feminisation of poverty, and the impact of rising terrorism on women in the Arab region. In the early days of the uprisings a lot of feminist activists in the region affirmed that there could be “no democratic transition without women’s rights”. Though experiences across the region are diverse, the Tunisian experience is commonly considered as the more successful transition in the region. Signs of success include democratic and free elections, press freedom, public liberty and a new constitution. Social movements remain strong, and citizen mobilizations are still ongoing. Yet the the old system remains strong, and political revolutionary forces are unable to draw together political and economic alternatives.

In fact, the seeds of feminist participation in Tunisia’s uprising were sown well before the revolution itself. Past struggles headed by women made their later participation in the revolution possible. This includes the struggles of workers and trade unionists, including thousands of women working in textile factories at the turn of this century who led strikes, sit-ins and hunger strikes to ask for their right to work against the backdrop of factory closures. The ratio of women’s involvement in Tunisia’s historical trade union, the UGTT, for example is no less than 44 per cent. And in the mining area in the south of Tunisia, protests in 2008 (widely thought to have ignited the revolution in 2010), 13 women played a critical role, sitting on railway phosphate for two months in protest against unemployment and lack of transparency.

After the fall of President Ben Ali, Tunisian women marched under the banner of “citizenship, equality, dignity”, arguing that there could be no citizenship and no dignity without ending discrimination. Yet this march also confirmed some of the women’s movements concerns, with some voices calling women to go back into kitchen and incidences of sexual harassment. So it was the first signal that the fight would be difficult.

The result was a political bipolarization between those who defend the gains of Tunisian women and call for equality (represented by the so-called democrats, modernists or leftists) and those who think that shariaa laws has to be respected (represented by conservative and Islamic parties). Many called for polygamy and the abolition of litigation for divorce, and hit women’s right to work, or abortion right. The most extreme even called for female genital mutilation and sexual jihad. In this context the critical question became how to reinforce women’s political participation.

In post-Ben Ali Tunisia, the first feminist struggle was for parity in the first electoral law for the constituent assembly. That fight wasn’t easy but we succeeded. The second was to put women’s rights in the new constitution which came on 26 January 2014 following a period of instability and crisis. It responded to many of the demands of the feminist movement with consideration of “equality between male and female citizens, one of the foundations of a democratic republican system”. The text of Chapter 21, furthermore says that “All citizens, male and female, have equal rights and duties, and are equal before the law without any discrimination. The state guarantees freedoms and individual and collective rights to all citizens, and assures all citizens the conditions for a dignified life”.

These and other chapters are clear progress compared to the Constitution of 1959. But despite the gains, the mention of religion in the definition of the state – “Tunisia is a free, independent, sovereign state; its religion is Islam, its language Arabic, and its system is republican” – remains a source of worry.

Tunisian post-2011 pro-women constitutional changes were not unique. In the Egyptian constitution of 2014, Article 11 prescribes the state’s commitment to “ensuring equality between men and women; to implementing positive discrimination measures to achieve equality; and to combating violence against women”. Morocco’s new constitution also included many dispositions to improve women’s rights, including Article 19, which subscribes to “the principle of equality between man and women on civil rights, political, economical, social, cultural and environmental rights”. Even Yemen has seen significant pro-women constitutional improvements.

But what value do such constitutional texts have for women’s rights and for the daily exercise of equality between men and women? Constitutional principles should translate in Law. In spite of the elaboration of legal texts protecting women and recognizing important rights for them, their status remains fragile. Discriminations still persist against women in social practice, in the name of tradition, customs and rites, filled with sacred and religious meanings. The main form of oppression remains violence against women.

A large consensus says that violence against Arab women after the Arab uprising has increased. Another common finding is that this increase is not only the result of conflicts or insecurity but is also a way to prevent and to stop the political participation of women, which may deeply change social gender relationships. Investigations show that sexual violence, including rape, indecent assault and sexual harassment, has largely increased in countries going through armed conflict or political transition. This alarming increase of sexual violence has occurred amidst general domestic violence, which remains the most prevalent form of violence against women in the South and East Mediterranean countries. Acts of sexual violence have increased in the absence of civil or criminal proceedings against perpetrators, in a broader context of deteriorating security and political instability. However, impunity is not only caused by transition processes, but also stems from weak domestic laws and weak governmental commitments to preventing and combating all forms of violence against women, including sexual violence.

In Tunisia official statistics by the National Office of Family and Population in 2010 indicate that 47.6% of Tunisian women may have been subjected to some type of violence (physical and moral and sexual and economic). In Egypt, at the end of 2012 and start of 2013, incidents of sexual assaults against women attending large protests were reported. Algeria’s parliament passed a law 6 March 2015 criminalising domestic violence against women in a vote harshly criticised by conservatives as intruding on the intimacy of couples and contrary to Islamic values.

The feminization of poverty and the impact of terrorism

Tunisia is also currently experiencing a deep economic crisis. This impacts on the cost of living and the worsening of unemployment and impoverishment of significant segments of society, which in turn leads to an increasing pace of popular and trade union protests. Women suffer the brunt of unemployment which affects 15 per cent of men compared to more than 25 per cent of women.

Salafist jihadists also threaten the security of Tunisia both at home and abroad. Wars, conflicts and insecurity are reflected primarily on women, vulnerable to both violence and displacement, and bearing the consequences of resulting economic difficulties. The broadcast of these movements’ reactionary ideology poses significant challenges to the development of a culture of equality and respect for freedoms and human rights in general.

But nonetheless there are some positive trends. Profound sociological changes in North Africa and Middle East have taken place with a new educated, technologically sophisticated and aspirational generation of women seeking more equality and freedom. The feminist movement in Tunisia, through recent successful experiences, has also placed the issue of equality and non-discrimination at the heart of the democratic transition and has achieved some successes. Critical to these successes were the experiences of Tunisian women before the revolution. Feminist demands were put forward very clearly from the first day of the revolution.

The women’s movement is a very important actor for change and is able to move societies not only against patriarchy but also against economic, political and cultural choices that enhance discrimination and exploitation against women. Revolutionary forces must sustain their struggle but also uphold feminist demands. The Tunisian experience confirms that feminism is a social and political change machine, women’s rights were almost the most important issue against fundamentalism

And whilst women across the whole Arab region are marked more than ever by discrimination and violence, never have women been so present in political and social struggles. A new generation are active, and new laws on women’s rights and equality are on the agenda throughout the region, even in the more repressive states. Women across the region are thus playing essential roles in building more open and democratic societies.