A Brief History of ISIS

A Brief History of ISIS 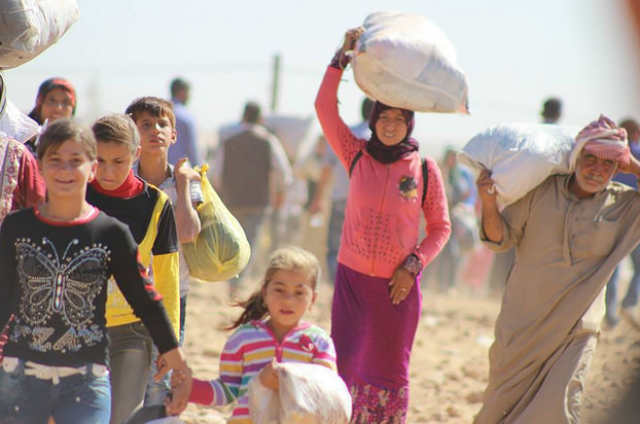 Adam Hanieh is a Senior Lecturer in the SOAS Department of Development Studies. He is the author of the 2013 book Lineages of Revolt: Issues of Contemporary Capitalism in the Middle East. His research interests include political economy of the Middle East, labour migration, class and state formation in the Gulf Cooperation Council and Palestine.

ISIS emerged out of the dashed hopes of the Arab Spring

In the wake of the November 13 attacks in Paris, much of the Left has linked the rise of the Islamic State of Iraq and Syria (ISIS) to the deepening imperialist violence in the Middle East.

War and imperialism, on one side, and the growing reach of jihadist terrorism, on the other, are said to be locked together in a mutually reinforcing embrace of violence and destruction. “Imperialist cruelty and Islamist cruelty feed each other,” the French Nouveau Parti Anticapitaliste (NPA) argued shortly after the Paris attacks. In order to break this nihilistic death grip, we need to oppose foreign intervention, put an end to imperialist violence, and halt the ongoing plunder of wealth from countries in the Middle East, Africa, and elsewhere.

The basic logic of this argument is undoubtedly sound. But in terms of explanatory value, this kind of analysis does not go far enough. It suffers from too much generality and abstractness — telling us little about the specificity of this particular moment, or the nature of ISIS as a movement. By attributing a kind of automaticity or natural mirror between ISIS and imperialism, we can miss the all-important context and history that has shaped the remarkably rapid rise of the organization.

Why does the response to Western aggression and the calamitous situations in Iraq, Syria, and elsewhere across the region take this particular ideological and political form? What explains the support that ISIS finds on the ground in both the Arab world and Europe? In short: why now? And why like this?

The real genesis of the Islamic State’s rise needs to be seen in the trajectory of the Arab uprisings that erupted throughout 2011 and 2012. These uprisings represented enormous hope, a hope that must continue to be defended. They were met with repression and reversal, unable to move forward in any fundamental sense. It was into this breach that Islamist groups stepped, their rise closely calibrated to the pushback against the revolts and the popular democratic aspirations that they embodied.

There was no inevitability to this. Rather, the difficulties the uprisings faced created a vacuum that was necessarily filled by something else.

ISIS’s worldview is an ideological expression of this new reality. To be clear, ISIS’s rise cannot be explained as simply an outcome of ideology or religion, as many Western commentators appear to believe. There are very real social and political roots that explain the organization’s growth.

But taking the ideological expression seriously helps us understand how various intersecting factors — the destructive spread of sectarianism, the devastating repression in Syria and Iraq, and the interests of different regional and international powers in the Middle East — have acted to incubate the rise of ISIS.

It is a dialectic of retreat: the growth of ISIS has reinforced, and has simultaneously fed off, an inability to achieve the aspirations of 2011 as the region has become mired in multiple, deepening crises. While ISIS’s ideological framing of these crises is obviously false, it is nonetheless one that appears for some to resonate with lived experience, a comprehension of the world that makes sense of the apparent chaos and destruction. The mutually reinforcing aspects of this process are what make the current situation so dangerous.

The upheavals that began with the protests in Tunisia and Egypt in 2010 and 2011, and subsequently reverberated through the entire region, were the most significant revolts the Middle East had seen in over five decades. It is important to remember the initial promise embodied in these movements at a time when too many are quick to dismiss them as doomed from the outset — or worse, some kind of plot stirred by external conspirators.

These protests drew millions into mass political action for the first time in generations, seriously shaking established state structures and the grip of repressive, Western-allied regimes. Most significantly, that these movements were regional in scope pointed to the commonalities and shared experiences of people throughout the Middle East. Their impact on political consciousness and forms of organization continue to be felt across the world.

From the beginning of these uprisings it was clear that the issues at stake went far beyond the simplistic caricature of “democracy versus dictatorship” that many commentators assumed. The underlying reasons drawing people into the streets were deeply connected to forms of capitalism in the region: decades of neoliberal economic restructuring, the impact of global crises, and the ways in which Arab states were governed by autocratic police and military regimes long backed by Western powers.

These factors need to be seen in their totality, not as separate or divisible causes. Protesters did not necessarily explicitly articulate this totality as the reason for their anger, but this underlying reality meant that the profound issues facing the Arab world would never be solved through the simple removal of individual autocrats.

It was to prevent any such challenge to political and economic structures that elites, supported by Western powers and their regional allies, quickly stepped in and attempted to quash the possibility of change. This took place through a variety of means, with a range of political actors coming to shape the counterrevolutionary processes differently in each country.

At the level of economic policy, there was little alteration, with Western donors and international financial institutions insisting on the continuity of neoliberal reform packages in places such as Egypt, Tunisia, Morocco, and Jordan. Coupled with this economic continuity, indeed a prerequisite for it, was the rolling out of new laws and emergency orders that banned protests, strikes, and political movements.

Simultaneously, political and military intervention in the region rapidly expanded. The fracturing of Libya following direct Western military intervention, and the Saudi-led crushing of the Bahrain uprising were two key moments of this process. Egypt’s military coup in July 2013 also marked a critical point in the reconstitution of old state structures, and confirmed the pernicious role of the Gulf States in pushing back Egypt’s revolutionary process.

Perhaps most significantly, the social and physical devastation wrought by the Assad regime in Syria, including hundreds of thousands of deaths and the millions of people displaced across and within borders, further reinforced a region-wide sense of despair that came to replace the initial optimism of 2011.

ISIS and its earlier incarnations were basically irrelevant to the first phases of these uprisings, the massive demonstrations, strikes, and creative protest movements that rocked all Arab countries during 2011. Indeed, the only comment ISIS (at that time known as the Islamic State of Iraq) could muster following the overthrow of Egyptian dictator Hosni Mubarak was a statement warning against secularism, democracy, and nationalism, urging Egyptians not to “replace that which is better with that which is worse.”

Yet as the initial aspirations for real change appeared to be increasingly thwarted, ISIS and other jihadist groups emerged as a symptom of this reversal, an expression of the apparent retreat in the revolutionary process and the growing sense of chaos. In order to better understand why this was the case, it is necessary to take a brief detour through ISIS’s ideology and worldview.

To read the rest of this article visit Jacobin Magazine where the piece was originally published in full: https://www.jacobinmag.com/2015/12/isis-syria-iraq-war-al-qaeda-arab-spring/