Will the TPP be Good for Workers in Vietnam?

Home/Uncategorized/Labour/Will the TPP be Good for Workers in Vietnam?

Will the TPP be Good for Workers in Vietnam? 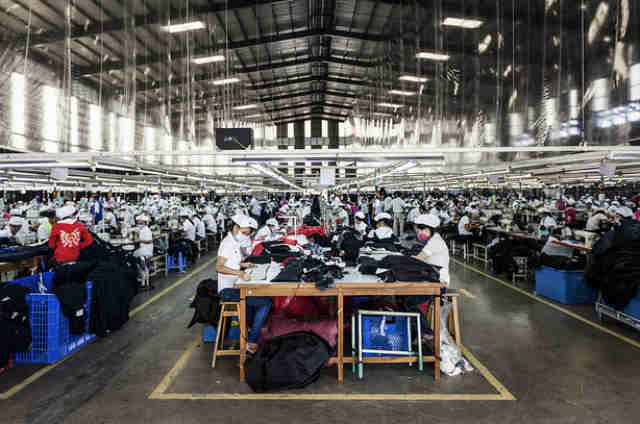 Joe Buckley studied the MSc Labour, Social Movements and Development programme at SOAS from 2012-2013. He is currently a PhD candidate in the SOAS Department of Development Studies, researching labour informalisation in Vietnam. He Tweets at @JoeJBBuckley.

International trade deals are often condemned because of the effect they will have on workers’ wages, conditions, and bargaining power. In America, Democrat party members and trade unionists are currently campaigning against the Trans-Pacific Partnership (TPP), a trade deal concerned with different matters of economic policy, such as lower trade tariffs and investor-state dispute settlements, and involving 12 countries, including Vietnam[i]. The final text of the deal was agreed in October 2015, and, having previously been secret, was made public in November 2015 (United States Trade Representative, 2015a).

The argument against the TPP in America is that the deal will take American jobs and exert a downward pressure on the wages and conditions of jobs that remain (see for example, Gerard, 2015). However, the impact that the TPP will have on workers in Vietnam, has attracted much less attention. Some observers argue that the TPP will be good for Vietnamese workers as the government has agreed to allow independent trade unions for the first time. This article will examine such claims.

Currently, there are no independent unions in Vietnam. The Vietnam General Confederation of Labour (VGCL) is a state-led union, constitutionally obliged to support the Communist Party and, despite some changes in recent years, is a long way from genuinely representing workers (Pringle and Clarke, 2011). Partly due to the union’s failure to represent and fight for workers, all strikes are technically illegal wildcat strikes, and collective bargaining mechanisms and labour arbitration councils are ineffective. Furthermore, there is no independent voice representing labourers in the national policy sphere, such as during annual minimum wage negotiations.

It is in the context of this low bar that some argue the TPP will be good for workers in Vietnam. As part of the agreement, all parties have committed to the following labour stipulations: the formation of independent trade unions and collective bargaining processes; an end to forced labour and child labour; ‘acceptable’ minimum wages, hours of work, and health and safety; and the prevention of the degradation of labour in Export Processing Zones (United States Trade Representative, 2015b). Additionally, Vietnam has signed a further agreement, detailing how it will achieve these labour protections (United States Trade Representative, 2015c).

Commentators have argued that these reforms are evidence that the deal ‘will help workers in Vietnam pursue their rights’ (Malinowski, 2015). Nhung points to four positive things the TPP deal will give labourers in Vietnam: better working conditions; reduction in the over-exploitation of women; freedom of association; and greater skills and knowledge (Lao Động Việt, 2015a). There is also hope that independent trade unions, even if just at the factory level initially, would inevitably lead to democratisation in Vietnam, similar to the Solidarity movement in Poland.

The VGCL’s position on the TPP’s labour stipulations, according to the organisation’s vice president, Mai Đức Chính, is that Vietnam’s laws are consistent with the commitment to end forced and child labour, and that the country has already been implementing an action plan to this end and will continue to do so. He also asserts that the law is already adequate with regards to minimum wages, hours of work, and health and safety. Regarding the right to form independent unions, Chính says that workers will have the right to form and join organisations in their workplace, but must then choose to join the VGCL or register with authorised state agencies. After completing a process ‘specified in legal texts’, workers’ organisations will have ‘some’ autonomy, in accordance with International Labour Organisation (ILO) regulations and Vietnamese law (in Lao Động, 2015).

This somewhat vague interpretation seems different to the intended meaning of the agreed labour reforms, and perhaps suggests that Vietnam is trying to reinterpret the stipulations – something observers are wary of. While the Free Vietnam Labour Federation, an organisation which campaigns for labour rights and freedoms in Vietnam, including independent unions, welcomes the labour regulations in the TPP agreement, they express concern that they won’t be enforced properly (Lao Động Việt, 2015b)[ii]. Indeed, it is by no means certain that genuine reforms will occur. Tùng, Đức and Trội argue that the Vietnamese government has systematically ignored labour rights violations, and refused to implement policies to protect workers; therefore ‘promises of future reforms by the Vietnamese government should not be trusted’ (2015: 1).

Such a scenario is not without precedent. It has been argued that Vietnam could conceivably make promises to create independent unions, but then ‘forget’ after the TPP comes into effect, as happened when Vietnam became a member of the United Nations Human Rights Council (UNHRC) and the World Trade Organisation (WTO) (Anon.,2015). Alternatively, Vietnam may establish ‘fake’, nominally independent, trade unions that would nevertheless be controlled by the Communist Party – like the current situation of religious organisations in Vietnam (ibid).

Furthermore, the reason that Chính mentions ILO regulations is because the labour reforms to which Vietnam has agreed in the TPP are not new – they are the same as those in the ILO’s 1998 declaration on Fundamental Principles and Rights at Work. Vietnam, as a member of the ILO, has already had to agree to these conditions, so ‘its agreement to abide by the TPP’s labour regulations is just a re-affirmation of old commitments and is not tantamount to a new concession’ (Hiệp, 2015: 10) – commitments which are regularly violated. There is, therefore, good reason to believe that Vietnam will not implement the reforms to which it has signed up. Indeed, the Director of the Worker Research Institute claims that the country already meets the labour requirements (Thọ, in Hạnh, 2015)!

Critics also argue that the labour agreements are unenforceable. If and when Vietnam breaks the labour regulations, the TPP will already have become trade policy, with no enforcement mechanisms to solve the situation, or to pressure Vietnam into making the previously promised changes (Calmes, 2015; Anon., 2015). If this happens, the positive labour reforms so flaunted by the TPP’s cheerleaders will have had no positive impact on Vietnamese workers.

Although the labour regulations may be unenforceable, one aspect of the TPP agreement does have enforcement mechanisms – the investor-state dispute settlement, which allows for companies to sue governments, if the government acts in a way that seems to damage the company. This behaviour has precedents. Chapter 11 of the North American Free Trade Agreement (NAFTA)[iii] details investor-state dispute settlements, which are similar to those in the TPP. Companies have used this to sue governments – Mexico has had to pay over $204 million of public money in compensation to corporations, while Canada has paid nearly $130 million (Sinclair, 2015: 29). No American company has ever lost a case. As part of a separate trade deal that also had an investor-state dispute settlement, the French company Veolia sued Egypt for raising the minimum wage (Ebehardt, 2014: 6). The power of corporations to sue Vietnam, then, threatens to greatly weaken workers. Companies generally want low wages and a flexible workforce, so if the Vietnamese government did decide to enact policies to strengthen labour – such as a big increase in the minimum wage[iv] – companies may sue, forcing the country to pay compensation and reverse policies. Even if independent unions were allowed, how much power would they really have to struggle for policy changes in the face of this corporate power?

Finally, the entire aim of the TPP is to allow more liberalised and freer investment – intensifying a process that has been occurring in Vietnam since the mid-1980s. Evidence from around the world shows that this leads to less secure work, with the loss of social protections and non-wage benefits, and increases in subcontracting and short-term employment (Chang, 2009; Standing, 2009). The 30 year process of labour informalisation in Vietnam, then, is set to continue and intensify under the TPP. Work will become even less secure, and, without powerful independent workers’ organisation to slow or stop the process, there is no regulation in the TPP agreement to give labourers’ ‘decent work’, to use the ILO’s common phrasing (ILO, 2015).

So, will the TPP be good for workers in Vietnam? It doesn’t look like it. The deal contains provisions for labour rights, but these seem unenforceable, in contrast to the very much enforceable rights of corporations to sue governments. There are also few provisions to protect workers against the next wave of informalisation and flexibilisation that they are about to experience. Very precarious labourers on the extreme end of the informalisation spectrum – the huge bulk of people working as street vendors, motorbike taxi drivers, or daily casual hired hands – are not even considered in the TPP labour chapter. What will happen to them?

This post was originally published on the SOAS MSc Labour, Social Movements & Development blog at: http://blogs.soas.ac.uk/lsmd/2015/11/30/will-the-tpp-be-good-for-workers-in-vietnam/. Full references are available on the original post.

[i] In addition to the USA and Vietnam, these are Australia, Brunei, Canada, Chile, Japan, Malaysia, Mexico, New Zealand, Peru, and Singapore.

[ii] Not to be confused with the Lao Động newspaper. Lao Động Việt is the shorthand name of the Free Vietnam Labour Federation, an independent organisation, while the Lao Động newspaper is one of two official newspapers of the state trade union, the VGCL.
[iii] A 1994 agreement between Canada, Mexico and the United States.

[iv] The system that determines minimum wage levels is already weak. A body comprised of the Ministry of Labour, The VGCL, and the pro-investor Vietnam Chamber of Commerce and Industry negotiate between them, heavily leaned on by organisations such as the American and European Chambers of Commerce in Vietnam.