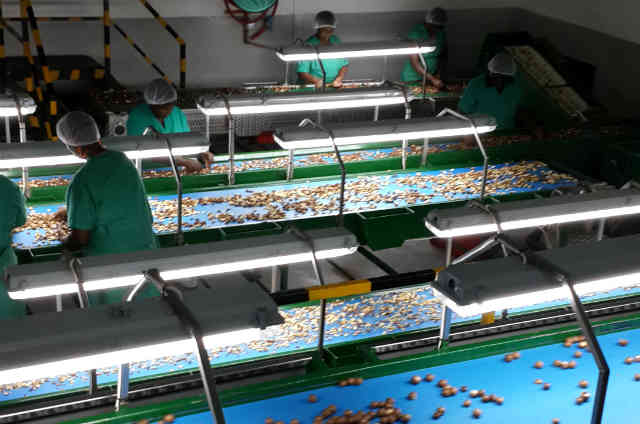 Christopher Cramer is Professor of the Political Economy of Development at the SOAS Department of Development Studies. His recent work has included the DfID funded project Fairtrade, Employment and Poverty Reduction in Ethiopia and Uganda. He Tweets at @CramerChristoph.

I recently asked the owner of a blueberry producing firm in South Africa whether he would consider the packet of fresh plump blueberries on the table between us a manufactured product. After all, the berries embodied the technology of genetic variety development (in California), carefully monitored planting, weeding, spraying and advanced irrigation technology, not to mention post-harvest care and packaging. ‘More than that’, he said, rolling a blueberry between his fingers ‘this is a pill – blueberries are part of big pharma’. With their superfood kudos, blueberries get the company a lot of free advertising.

So a blueberry is a high-tech pharmaceutical product, a pill. Meanwhile, a fresh orange bought in a Europe or the US has more technology embedded within in it, is higher value, and is more ‘processed’ in some respects, than a carton of orange juice squashed from poorer quality oranges.

Globally, agriculture is not only big business – it is also industrial business. It encompasses the increasing use of the genetics of plant stock, water-saving micro and nano irrigation, waste-reducing targeted nutrient supply and pesticide application and post-harvest ‘ripening facilities’. It also entails the need for new IT systems to monitor and ensure traceability of every batch of avocados, macadamia nuts or oranges to meet demanding phyto-sanitary regulations, the complex logistics and infrastructure of packhouses, ports and airport cold storage, as well as sophisticated advances in packaging, labelling, and branding. All these processes and technologies amount to the industrialisation of freshness.

Even an apparently unprocessed macadamia nut – not the kernel but the ‘nut in shell’ that is the preferred way to package and sell macadamias in China, in bags with the branding phrase ‘New expression of the daintiness’ – is carefully manufactured. Optical sorting machines and more basic water tank equipment are used to work out whether the nuts hidden within the kernels are spoilt by nut borers or short-nosed stinkbugs. There is also a ‘processing’ step in making a small incision in the shell to make it easier to pass round the table and prise open.

Illy, a global leader in selling fresh coffee beans, uses a hugely expensive spectrometer in its factory in Trieste to isolate high quality, unblemished beans from samples that may include overripe, immature, scorched or moulded beans. East African and South American roses, meanwhile, are produced in tightly controlled greenhouses, in digital rows, alternate ones and zeros, rows of stems and lines of clean empty soil.

Such trends are taking place all around the world, from Ethiopian and Ecuadorian flower greenhouses, to Peruvian and South African avocado production. And it is nowhere more true than in advanced industrialised economy agriculture. The Guardian has reported on high-tech agriculture in the UK, where some farmers use GPS satellite technology to apply fertiliser with inch-sensitive precision. Others still use micro-dot spraying techniques to apply chemicals only to the leaves of plants, requiring 99.9 per cent less in volume. One farmer reportedly uses a ‘moo monitor’ to take milk cows’ temperatures, saving £15,000 a year.

These trends are so powerful globally that the share of value in an agricultural product that is added directly ‘on the farm’ is shrinking, in some cases dramatically. Modern food systems, as Douglas Gollin and Lilli Teresa Probst  argue, ‘are to a large extent distinct from agriculture’. In the US in 2012 less than 10 per cent of the ‘industry food dollar’ was derived from value-added in the farm sector. This is partly a product of the rising share of processed and prepared food, but also the rise of the shares taken by distribution, transport, storage and marketing.

As a result, the boundaries between agriculture and manufacturing (and services) are increasingly blurred. It is harder and harder to make clear distinctions between ‘processed’ and ‘unprocessed’ or even ‘semi-processed’ primary commodities. And it is not always clear that the more ‘processed’ an agricultural commodity, the higher its value. For South African macadamia nut producers this can be a fine judgment that varies annually, according to where macadamias are sold. Orange growers, however, are very clear that the real value in the industry lies in the export of fresh whole oranges, not in juice.

This has implications for policy and regulatory frameworks. If government incentive programmes in developing countries are designed to encourage dynamic processes of learning-by-doing, rising productivity and linkages, this does not have to mean abandoning agriculture – or what at first appear to be unprocessed commodities (as over-simplistic readings of development economics may suggest). This may in fact undermine the scope for developing competitive integrated agro-exporting firms.

It also has implications for debates about the appropriate scale of farming. While in rich countries, changing technology developed initially for giant farm-firms may now be starting to be affordable and applicable on medium-sized farms, more broadly, small farms are less and less the foundation of dynamic agriculture, particularly that which is geared toward international trade.

And it has implications for employment. SOAS research finds that industrial flower production in new flower farms in Ethiopia has generated tens of thousands of new jobs directly, and many more indirectly. South African macadamia nut processors may buy optical sorters to replace (or help discipline) wage workers, but the machines need servicing and substantial numbers of workers are still employed in the factory. Overall, the research shows that the rate of growth of the sector has generated large numbers of factory, service, and field jobs in a context of a desperate need for more employment opportunities. As John Vidal’s article reported, ‘While agricultural robots will replace semi-skilled drivers, an equal number of highly skilled robot engineers will be needed’.