In July, a public screening and workshop took place with financial help from the Decolonising SOAS. Below is the convenor’s report for Vizazi Contemporary Visual Culture of Tanzania.

The two events to share and consider developments in Tanzania’s visual culture were motivated by separate conversations early in the new year with two emerging scholars. Their ongoing research projects resonated with my post-university experience in the decolonization of culture/expressive arts and the curriculum in Tanzania (1965-67) on Mount Kilimanjaro, a key location in their projects, and with my academic awareness that the contemporary visual arts of Tanzania, in comparison with those of Kenya, Uganda or Swahili culture, have received minimal, critical attention at home, abroad and SOAS. Ms Mamseri and Dr Shirland agreed to a colloquium in July that I would convene to provide space to generate a new “contact zone” for conversations about art in Tanzania.

Both suggested inviting Dr Zachary Kingdon, a specialist on Makonde sculpture and a third generation east African, to be our discussant. Remarkably, all the presentations contained formative, essential relationships between generations, indicating the workshop leitmotif: Vizazi, Swahili for “generations, for giving birth”. Indeed, such relationships are instrumental in providing the scaffolding for creating modern art when formal institutions are feeble.

Early in the planning, the programme grew to include exemplars to mark the nation’s temporal bookends: heritage and performance/new media. A fellow teacher at SOAS, Donovan McGrath, recommended the German-authored, tri-lingual film (2001) Headhunting Searching for the Skull of Sultan Mkwawa to set the stage for visualizing resistance to imperial rule during the 1890s, specifically for Mamseri’s presentation about an ongoing art collaboration aimed at the repatriation of Chagga Chief Meli’s skull. SOAS professor Paul Basu commented cogently on the film from his theoretical and applied (museum) perspectives, stressing the necessity of plural voices; he also offered comparisons with his experiences in Sierra Leone and Nigeria. Both he and McGrath stressed the dynamic between memory and history. About fifty people attended the public screening, including three UK-based Mkwawas. The discussion was about the need for renewal of legacies of resistance (in formal education), the restitution of human remains (not as contentious as the return of objects), the intentions of the film-maker (to bring attention to the violence of German-colonial rule), the Treaty of Versailles, comparisons between German and British colonial rule and the use of voice-overs in Swahili. A final query was “Does it matter?” referring to concerns about the authenticity of Mkwawa’s skull.

On contacting Rehema Chachage whose practice had been identified as the case study for contemporary art/new media, it transpired that she could participate in person: eureka! However, the arrangements for both her UK VISA and flight were time-consuming and expensive ordeals that were surmounted with the support of our sponsors. Rehema’s ‘voice’ enhanced both events. Her presentation about her critical practice that engages with five generations of her matrilineal legacy demonstrated how family memory can be expressed through performative installations and time-based art; please see www.rehemachachage.co.tz.

Tessa Jackson OBE, an international arts consultant, who is currently mentoring an art writing project in east Africa, moderated the discussion for contemporary practice, which involved attenders artist Arlene Wandera(who like Rehema has participated in Dak’Art the Biennale of Contemporary African Art, 2018) and Siegrun Salmanian (an emerging east Africanist scholar-curator).

The programme presentations were excellent, well-prepared and well-delivered; a sense of the content is conveyed in the following images.

Figures 1-3 are from Jonathan Shirland’s presentation ‘Case studies in the development of Tanzanian Modern Art’ in which he considered the careers of two pioneer artists in conventional modern art: Mwandale Mwanyekwa in sculpture and Sam J. Ntiro in painting.  Both artists are highly acclaimed national art celebrities in their distinct historical times/generations. 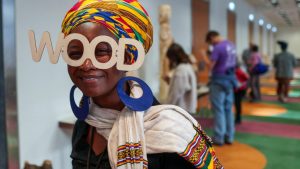 Figure 1. Mwanyekwa (b.1978) is the first significant female sculptor in the Makonde modernist movement that transformed Makonde traditions into nationalist genres in both Tanzania and Mozambique; 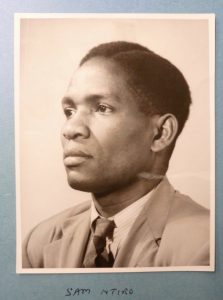 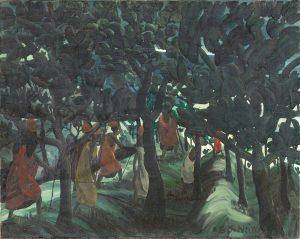 Figure 3. The painting Men Taking Banana Beer to Bride by Night 1956 was acquired by the Modern Museum of Art New York in 1960, making Ntiro the first African artist to have a work purchased by MOMA. In 1964, it was exhibited in the museum’s group exhibition Art in a Changing World. 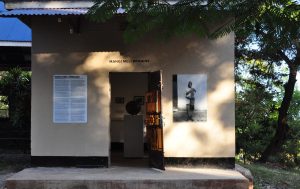 Figure 4:  Mangi Meli Remains creates a place of remembrance for Chief Meli and place holder for his skull in the refurbished Old Court House, Moshi Tanzania. 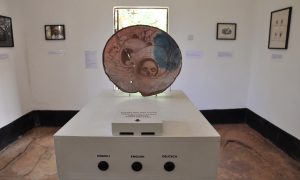 Figure 5: Video sculpture that projects a drawing of Chief Meli into a pottery vessel, rehearsing the traditional funeral ritual of the Chagga . 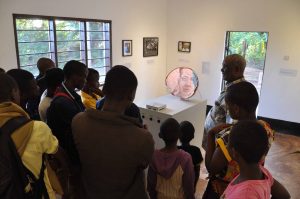 Figures 7 & 8 are from Rehema Chachage Artist’s Talk in which she described her practice as a series of chapters that reference her family and culture history.  (Photos courtesy of the artist Rehema Chachage) 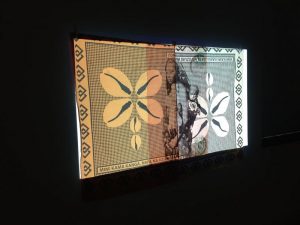 Figure 7:  A still image from Mimi kama kanga [me like a kanga, i.e. a Swahili iconic textile]

Chachage’s installation that combines the projection of archival photographs of coastal women on her self-designed kanga. The piece refigures the travail of her matrilineal ancestor Nankondo who disappeared, possibly abducted by slave traders.  For the video, see www.rehemachachage.co.tz. 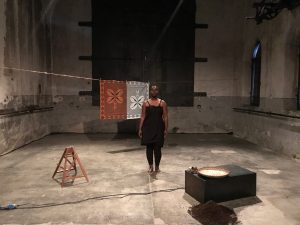 The programme presentations were excellent, well-prepared and well-delivered; a sense of the content is conveyed in the following images. There were lengthy discussions that are continuing as conversations.

Specific points were made concerning the lack of monographs for key pioneer modern painters — Sam J Ntiro and Elias Jengo — with pleas to promote such monographs through collaboration with the Dar-es-Salaam publisher Mkuki ya Nyota.

All those present lamented the continued weak level of art studies throughout formal education. Discussion was minimal about the lack of joined-up national, narrative beyond reference to its popular, modern, inscribed components: Makonde sculpture, ‘Tinga Tinga’ and kanga textiles.

Comments were made about the continued neo-colonial legacy of the Makerere University Art School and about the power of NGOs to shape/control the development of art-making and writing, inclusive of the sponsorship of spaces for contemporary kinds of practice in alternative spaces.

Outcomes. The events demonstrated what is possible when different sectors of SOAS work together. The quality of intersectional cooperation was high between colleagues in IFCELS, the Language Centre, African Studies, Anthropology, Multimedia, CAS and the Decolonising SOAS Group.

There was strong agreement to keep in touch, initially through sharing e-mail addresses and a document that lists resources and references for the presentations and related projects. A way to increase the profile of Tanzanian visual culture is by participation in regular symposia organized by SOAS Baraza, ASAUK, AEGIS, ASA-USA; for example, Shirland is presenting his paper at ASA in November, likely, several of us will be presenting at Baraza.

Another way is to insert Tanzanian visual arts culture into ongoing well-funded projects that address common issues, such as ‘African Screen Worlds’ (a conference) and ‘Another World? East Africa and the Global 1960s’ (a research project). No specific publication was discussed.