The Migrant Connections Collective was founded in 2017 by a group of volunteers with a migrant background who had experienced, and were familiar with the issues faced by refugees, asylum seekers and migrants. We are behind the Migrant Connections Festival, an annual migrant-led family festival of art, music, campaigning and healing activities aimed at celebrating migration.

On 8th June 2019, the third edition of the Migrant Connections Festival took place in Grow Tottenham, North London. With an estimated number of 600 attendees throughout the day, we achieved our aim of bringing together people from different migrant backgrounds and relevant supporting organisations to create a space of community and solidarity via education, connection and creativity. The festival ran for 12 hours, from 10am to 10pm, and created a space for migrants to feel welcomed, safe and nourished, providing a positive atmosphere for people to take a break from their daily lives in the hostile environment the UK is for many of us.

The space encouraged radical collective care activities, workshops and services which were all free of charge and featured theatre of the oppressed, refugees’ stories, futuristic feminist utopias, politics of food, art exhibitions, hairdressers, legal advice, English lessons and many more. We also covered travel expenses for those who needed it, provided free childcare and translation during the day and offered a dry event with breakfast, lunch and dinner as well as tea, coffee and refreshments included. Lastly, we compensated as many people as possible for their time facilitating the festival, most of whom were migrants on a low income or have a legal status that does not allow them to work. Therefore, we spent around £900 in travel expenses, £1200 in free nutritious food for all, £600 in workshop and services facilitator fees and £800 in performers fees. 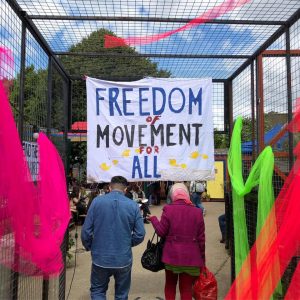 Entrance into ‘The Garden’, the space of the venue where food was served and the main stage was placed. Photo credit to Pueblito Paisa.

In that sense, the main beneficiaries of the event were migrants on a low income and/or with a precarious legal status who benefited from the outcome of the event, which was to create meaningful connections between and amongst individuals, groups and organisations both migrant and non-migrant. We know that social exclusion is a big part of the hostile environment migrants face, as they are often dispersed to areas of the UK where they know no one, and face a complicated and lengthy asylum process in isolation. We believe our festival directly challenged this, especially by putting inclusion and accessibility at the centre of what we did. Also, by platforming the work and knowledge of those who are usually excluded from the spaces and system that does not value their potential contribution to society – only due to their legal status – we encouraged modes of knowledge production and cultural sharing that challenge the exclusionary power dynamics migrants often have to navigate.

While the current bordered neoliberal global regime is constantly closing down spaces of migrant community and solidarity, we made an effort to keep them open as well as keep opening them. We believe we succeeded, especially when looking at the feedback received from attendees such as The Outside Project, the UK’s first LGBTIQ+ shelter: “Guests had a great time yesterday at Migrant Connections Festival. In one of the workshops, one of our guests spoke more words than we have heard in the entire time they have stayed with us. Very important space. It was a breath of fresh air for us. The house is from all over the world and we wish more spaces like this existed”.

In conclusion, thanks to grants such as the one received from Decolonising SOAS and despite the bad weather in the early morning, the 8th of June ended up being a beautiful day full of solidarity, appreciation and collective care, and Migrant Connections Festival 2019 was, as one of our participants put it, “the prettiest festival with the best politics”. Migrant Connections Collective July 2019 Entrance into ‘The Garden’, the space of the venue where food was served and the main stage was placed.