This note is to express our gratitude for being invited to represent the delegation of the United States of America and Albania at the HCSS NATO Model Conference on cybersecurity at The Hague. We are grateful to the Centre of International Studies and Diplomacy (CISD) Department for their support and sponsorship. 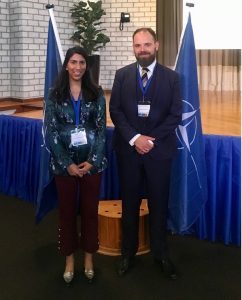 On June 2-4th, 2019 the Hague Centre for Strategic Studies (HCSS) in cooperation with the NATO Centre for Civil Military Cooperation (CCOE) and The Municipality of The Hague, hosted  the first model conference of NATO’s North Atlantic Council (NAC).

The Conference topic was Determining appropriate and proportional responses to cyberattacks against NATO member states. Once successful in their applications, delegations were expected to write and submit position papers reflecting their respective country’s stance on cybersecurity. 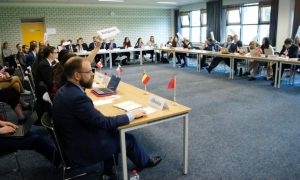 As a nod to NATO’s 70th anniversary this year, the Model Conference addressed contemporary security challenges facing the alliance. In July 2016, Allies made a Cyber Defence Pledge which aimed at enhancing national cyber security as a matter of top priority. Following, the 2018 Brussel’s Summit saw an agreement to establish a new Cyberspace Operations Centre. Additionally, the creation of the NATO Cooperative Cyber Defence Centre of Excellence (CCDCOE) placed cyberattacks at the forefront of NATO’s security challenges.

The conference highlighted the need to provide parameters and thresholds for appropriate responses to cyberattacks. The shift from the challenges of conventional warfare such as armed troops on the ground, to unconventional warfare such as cyberwarfare, represents the challenge of the 21st century. The potential threats faced on the frontlines have moved to potential threats sitting on our kitchen counters in the form of our laptops, as seen with the cyberattack on Estonia in 2007, where thousands of private and public computers were hijacked to form malign bots attacking Estonia’s digital infrastructure.

The Model Conference was set at the private compound of the military where HCSS is located. Living in a military complex for civilians is a rare experience. Walking alongside uniformed military personnel on the way to eat our meals at the complex cafeteria enforced a deep sense of respect for the work being done by the military professionals and an appreciation of the gravity of the challenges HCSS engages with. 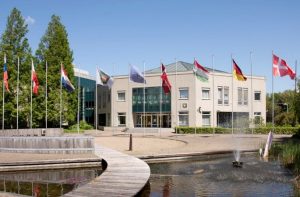 At the Opening Ceremony we were welcomed by keynote speakers, the former member of the Dutch House of Representatives Han ten Broeke who is the current Director of Political Affairs at the HCSS, Colonel (GS) Johan Wangner who is the Deputy Director of CCOE, Commodore Elanor F. Boekholt-O’Sullivan who is the Commander of the Defense Cyber Command and Diplomat Michel Rentenaar who is the Netherlands Deputy Permanent Representative to NATO in Brussels.

Throughout the conference, military personnel sat in on the negotiations and provided guidance and experienced negotiators gave useful tips in relation to strategy planning and representing a country’s position successfully. 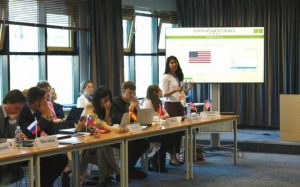 Our interdisciplinary MA courses prepared us to do well at the Conference, especially in terms of practical skills developed in courses such as Diplomatic Practice and Global Energy and Climate Policy focusing on negotiations and national strategy planning.  International Security Studies covered academic approaches to cybersecurity and Foundations of International Law provided a legal framework to approach cybersecurity.

The Conference provided a great opportunity to network and foster connections with international students and young professionals interested in cybersecurity, international affairs and diplomacy. The Hague was the perfect place for such a conference, as the city intrinsically represents justice, peace and the liberal international order which can be seen in the many institutions placed in The Hague- International Criminal Court, International Court of Justice, The Peace Palace, The Permanent Court of Arbitration to name a few.

The Conference was a valuable experience which served as a productive introduction to the inner workings of NATO’s North Atlantic Council and the consensus based policymaking.

The essence of NATO Article 5 on Collective Defence: “all for one, and one for all”.