The conversation on climate change is dominated by narratives that are often one-dimensional, incomplete, and intellectually dishonest. Yet, if our generation does not grapple with the issue of climate change with maturity and honesty, then we will continue to literally put the future of our children at peril. And we will rightly be judged as the generation that shirked our responsibility and did the bare minimum when we could have done everything possible to secure the welfare of people and planet. I will unpack four narratives in the climate change narrative that have proven stubborn, and are already causing disquiet and irritation, particularly in countries that are not rich. The newest emphasis of this narrative is the China blame game, one that conveniently omits realities such as legacy and per capita contributions. This piece will centre a view from Africa in the spirit of COP 27 being held in Egypt later in the year.

The first myth that we are all responsible for climate change. This is not true. The consequences of climate change are global, the causes are not. If you look at the past industrial revolutions, Africa literally could not participate in them and therefore, played marginal roles in the emissions, pollution and problems that stemmed from them. As Dr Bitange Ndemo has pointed out, the first industrial revolution, defined by mechanisation, occurred between mid-18th century to about 1830. During this time, Africa was deep in the struggle to end Africans being bought and sold as slaves, particularly through the Trans-Atlantic Slave Trade. Slavery ‘officially’ ended in1865. The second industrial revolution, defined by mass production and electricity, happened between the late 19th century into the early 20th century. During this time, Africa was being invaded by colonial powers and thus was focused on the fight to stem off invasions and subjugation by colonial powers. Most African countries managed to end direct colonisation by the 1960s, but some countries such as Zimbabwe, did not secure independence until 1980.

The third industrial revolution, defined by automation, ICT and electronics, started in the mid to late 1900s onwards. This industrial revolution started during Africa’s post-independence era and the Cold War. The Cold War era for Africa was terrible, defined by newly formed African governments being forced to choose sides (Capitalism/Democracy versus Socialism/ Communism). Africa was the location of Cold War proxy wars (such as the Congo Crisis and the Angola Civil War) which cost African lives and severely compromised the economic development of the continent. This era was defined by dictatorships (often bolstered by external powers), coups and countercoups, and the relegation of Africa as a source of raw materials to power industries elsewhere. This background is provided to demonstrate that continents such as Africa could not and did not contribute to the industrial emissions, pollution and environmental problems that have led to the climate change crisis today. The global north ought to take ownership for the majority role it has played in creating this crisis, which leads to the next point.

The silence and lethargy on taking responsibility for legacy climate change contributions is deafening. Columbia University’s Climate School has done some fascinating analysis on legacy contributions, rightfully stating that the onus to address climate change should be on those countries which brought it about: 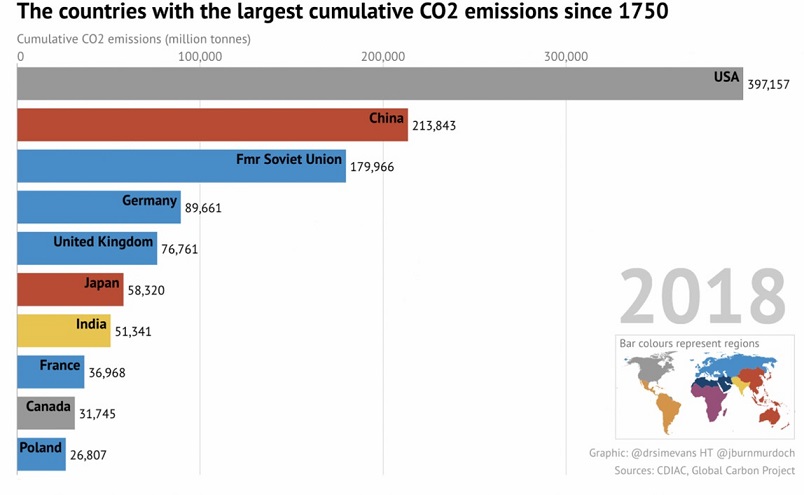 While the list above contains names of powers that have not historically been overtly colonial or imperialistic, the bulk of them are. This point is made because, arms production and the military supply chain play a significant role in the carbon cost of war, including those related to colonial and imperialistic objectives. Yet the lack of transparency makes it hard to calculate the true scale of military emissions, both current and historical, but it’s clear they are significant. Obviously, the emissions listed above have informed the wealth garnered by these countries. Bear in mind however, that the list above assesses cumulative CO2 emissions, and this veil is often used in the climate change debate to shirk responsibility, which leads to my next point.

The pointed lack of focus on emissions per capita in climate change conversations is baffling. Emissions per capita is a useful and important lens through which climate change responsibility can be assessed as it paints a clearer picture on which countries are putting a strain on the environment, per person. An article by the World Economic Forum makes the point that the US is way ahead of China under the CO₂ per capita measurement:

Increasingly the emissions conversation has focused on China and the fact that it overtook the US in terms of total emissions in 2006 and emits more than the US and EU combined. The focus on China conveniently obscures the fact that when emissions are broken down per capita, China does not feature in the top five, which leads to my final point.

The China Blame game is a key feature of climate change conversations today. The global north vociferously blames it all on China. While it is true China must bring down emissions, this line of reasoning forgets that it is the demand for goods from China by the global north that informs high emissions in China. If the US and EU produced what China produces for their markets and consumers on their own, their emissions would skyrocket. In 2020, China overtook the USA as the main trading partner for the EU mainly due to an increase in imports from China (+5.6%). The USA has long been reliant on imports from China, and China still ranks number one as the source country for imports (although China is behind Mexico and Canada in total trade with the USA). And for China, the USA is its top export destination, followed by Hong Kong, Japan and South Korea. See below the data for 2021:

Data analysis by the Observatory of Economic Complexity (OEC) indicates that top exports of China are manufactured goods such as broadcasting equipment, computers, integrated circuits, office machine parts, and telephones. Given the share of value-added and manufactured goods imported from China by North America and Europe, the myopic hypocrisy of simply blaming China for emissions is stark and perhaps reflects a reluctance to own up to how consumption habits in the global north are an engine of China’s emissions. 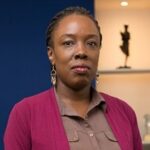 Anzetse Were is a development economist with over ten years of experience in economic research, analysis, advising and strategy development focused on inclusive economic development and transformation in Africa. Her areas of expertise include the financial sector and finance systems in Africa; country and regional economic diagnostics in Africa; private sector development; the digital economy; climate finance; and the political economy of finance and development in Africa. She has a Master’s in Economics from the University of Sydney (Australia) and a Bachelor’s degree from Brown University (USA).