China’s President Xi Jinping has announced that China will aim for its emissions to reach their highest point before 2030 and for carbon neutrality to be achieved by 2060. In December 2020, President Xi announced the new China 2030 climate targets to the International Climate Ambition Summit, which included new tougher goals on carbon intensity, non-fossil energy share in the primary energy mix plus increasing reforestation. He also announced that China will be accelerating new renewable energy installations with China’s wind and solar capacities reaching 1,200 gigawatts by 2030.

China became the world’s largest emitter of carbon dioxide in 2006 and is now responsible for more than a quarter of the world’s overall greenhouse gas emissions. China’s per-person emissions are about half those of the USA, but its huge 1.4 billion population and fast economic growths have pushed up its overall emissions.

Many international experts have forecasted that reducing China’s emissions should be achievable but will require radical energy transition shifts. Coal has been China’s main source of energy for decades. President Xi has announced that China will “phase down” coal uses from 2026 and will stop building overseas coal plants. Researchers at Tsinghua University in Beijing have said that China will need to stop using coal for electricity generation by 2050, to be replaced by nuclear and renewable clean energies.

China is accelerating its energy transition from fossil fuels to green renewable energies fast. China is now generating more solar power than any other country. China’s wind power installations are currently more than triple that of other countries. China has announced that the proportion of its energy generated from non-fossil fuel sources will reach 25% by 2030. Many international experts forecast that China will reach its clean energy target early.

China’s lead in green renewable technologies, such as solar panels and large-scale batteries, is supporting its green energy transitions. These are also helping to reduce China’s air pollution as well as generating millions of new green jobs plus reducing China’s dependence on foreign oil and gas imports.

On electric vehicles EV, China is now seventh in the world for its percentage of car sales that are electric. China currently makes and buys more electric cars than any other country by a considerable margin. About one in 20 cars bought in China is currently electric-powered. These are important trends as transport is currently responsible for around a quarter of carbon emissions from fossil fuel combustion, with road vehicles being the largest emitters globally.

On batteries, experts forecast that China will be producing electric batteries with double the capacity of those produced by the rest of the world by 2025. International experts forecast that this will enable the storage and release of clean energy generated from renewable sources on a massive scale in China.

Another important clean energy policy development is that China has included hydrogen as a clean energy source in its new national energy law which signifies the strategic importance of hydrogen in China’s energy transition plans. Hydrogen is traditionally produced from fossil sources, including gas or coal gasification, which normally results in significant carbon emissions. China is currently accelerating the innovative developments of new green hydrogen production by renewables with water electrolysis. These are being developed fast by research institutes in China with big future cost reductions forecasted. Experts are forecasting new green hydrogen production cost reductions of some 80% by 2030.

One important green approach is to increase the area of land covered in vegetation and forests, as plants and trees will help to absorb carbon dioxide.  China is currently getting greener at a faster rate than many other countries. One key area is its forestry programmes which are designed to reduce soil erosion and pollution. In addition, the replanting of fields to produce more than one harvest per year, will help to keep land covered in vegetation for longer. China is increasing its forest cover nationally with its Green Great Wall Project. China is planting 350,000 km2 of new forests stretching some 5,000km across the country.

China also values international co-operations and is likely to be active in the following key areas:

1. International commitment on sustainable energy transition with substantial carbon reductions. Uphold the UN-centered international system, comply with the objectives and principles laid out in the UN Framework Convention on Climate Change (UNFCCC) and the Paris Agreement.

2. International commitments to improved harmony between man and Nature. Promote international protection of Nature and preserve the environment plus endeavour to foster a new relationship where man and Nature can both prosper and live in harmony globally.

4. International commitments to improved systemic governance and follow the innate laws of the ecosystem so as to achieve better ecological balances.

5. International commitments to improved people-centered approaches. Climate and environmental improvements globally will help to improve the well-being of people in all countries across the world.

Looking ahead, China hopes to work closely with countries globally to reach their Paris Agreement targets and to reach carbon neutrality by 2060. Good international cooperation and exchanges in these important areas are very important as the world and China all need to succeed in their decarbonisation and energy transition plans so that we can all achieve the common goal of working together to control climate change globally. 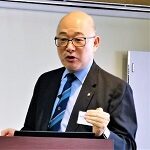 Henry K. H. Wang, FRSA, is an Advisory Board Member of the SOAS China Institute.