Sang culture: how a reluctant Russian singer became the hero of young pessimists across China

For Vladislav Ivanov (aka Lelush), being finally kicked out of Produce Camp 2021 was a dream come true. In February, Ivanov signed up for the Chinese boy-band survival show but instantly regretted it. Since then he has tried all means to get voted off so as not to breach his contract. However, his dejected look, half-hearted performance and direct pleas to let him go had the opposite effect. Not only did Ivanov make it into the final, but he has also become an icon of China’s Sang culture (sang wenhua).

The Chinese character “sang” (丧) is extracted from compound words and idioms that suggest a lack of courage, vigour and liveliness. These are words such as “tui sang” (dispirited), “ju sang” (frustrated), “hui xin sang qi” (disheartened) and “chui tou sang qi” (dejected).

Such feelings, alongside self-deprecation and pessimism, have in the last few years come to be unabashedly celebrated in China in a distinct youth subculture known as Sang culture. Thanks to social media platforms such as Weibo (the Chinese version of Twitter) and WeChat, this subculture is maintained and spread through funny memes and cynical sayings that turn the state of dejection into a sought-after style.

Many Chinese media scholars trace the emergence of Sang to the viral “Ge You Slouch” meme in 2016. The meme began as a screenshot of Ge You, a leading film comedy actor, in his role as a dishevelled loafer slouching on a sofa in a 1990s’ TV sitcom. 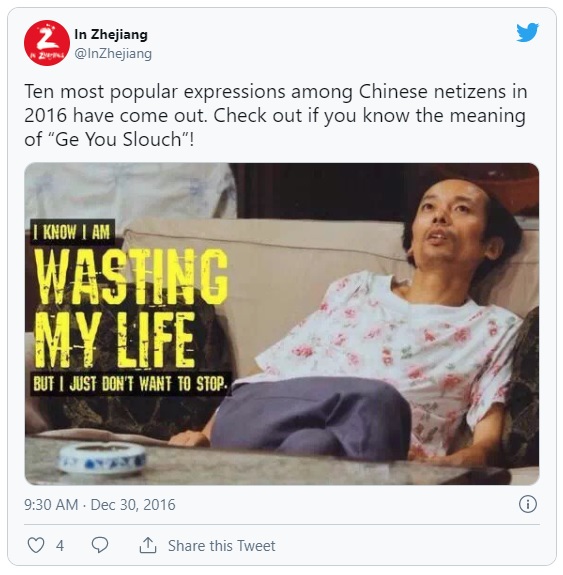 Some on Weibo reinterpreted Ge You’s poor posture as the full acceptance of a state of dejection, and the catchphrase “I am a total wreck” was soon added to the image.

Soon after, a handful of cartoon characters, including the self-loathing cynical alcoholic BoJack and depressed Pepe the Frog, also reached iconic status, becoming the embodiment of Sang culture. Self-justifying, humorous expressions such as “life is a series of closing doors” and “lie down flat where life knocks you down” also became popular.

An antidote to unrealistic positivity

Chinese millennials’ embrace of Sang culture is a quiet deviation from China’s mainstream political ideology, as well as a blatant rejection of the modern tendency for overdosed positivity and productivity.

Since Xi Jinping took office in 2012, the Chinese Communist Party has turned a grassroots catchphrase “positive energy” (zheng nengliang) into a political buzzword. In doing so it has instrumentalised “promoting positive energy” for political goals. According to the Chinese studies academic Francesca Triggs, the “positive energy” discourse stresses the social responsibility of individual citizens. It is also used to justify the state’s control over the internet for the purpose of safeguarding the health of cyberspace, and to shape ideological consensus and public opinion.

Parallel to the “positive energy” ideology propagated by the party is the neoliberal fable of self-making. Chinese bookstores have entire sections devoted to celebrity entrepreneur and their “do-it-yourself success stories”. Such positivity has turned sour for millennials, who bear the brunt of China’s rapid economic growth.

Fierce academic competition, soaring housing prices, the “996” work culture (from 9am to 9pm every day, six days a week), and the closing off of upward mobility are some of the harsh realities faced by young people. For them, embracing “Sang”, or having a defeatist attitude towards life and self, is a strategy to cope with an uncertain future and a way to bond with their peers.

The spread of Sang culture in China has invited commodification. “Achieved-absolutely-nothing black tea”, “Failed-to-lose-weight latte”, and other Sang-themed products have achieved some popularity among millennials.

It is common for a subculture to lose its edge after being commodified in this way. But Ivanov’s unfortunate celebrity in the boy band reality show demonstrates that Sang culture can exploit commercial interest to reinforce itself and consequently have a real-life impact. Ivanov’s half-hearted performance on stage endeared young Chinese audiences because they knew that he was not performing but “being” himself. They saw this Russian man as “one of us”.

Chinese audiences bonded emotionally with Ivanov. They had to put him through the ordeal of the entire season’s competition, just as they have to toil day in and day out. This begs the question: had Ivanov known about Sang culture and that his dejection would win him fans, would he have decided to try harder?

Disclosure statement: Xiaoning Lu does not work for, consult, own shares in or receive funding from any company or organisation that would benefit from this article, and has disclosed no relevant affiliations beyond their academic appointment. 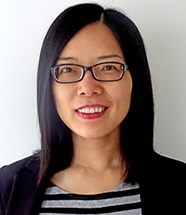 Dr Xiaoning Lu is Reader in Reader in Modern Chinese Culture and Language at SOAS. Her research on modern Chinese cinema and culture focuses on the relationship among the aesthetic, the affective, and the political in the making of modern identities.

Originally published by The Conversation on 30 April 2021.