One of the most pressing concerns for civil society in the next few years is the issue of social media and communication technology. So much of our civic and public life is conducted online, yet sometimes we forget that the platforms we use are private and profit-driven. The limitations of relying on businesses to serve society have become clear in recent years. We need more avenues of communication that aren’t owned by a small number of individuals. The question becomes: how do we create a platform that can serve the needs of everyone? Is it too late to escape the profit-driven model? How can communications technology be democratised/re-democratised?

As well as reining in our worst excesses on social media, we need to start thinking about how communications technology can be used for good. Various outlets have seized on forums that seem, if only briefly, to offer a vision of an alternative discourse – the ‘last pure place on the Internet’. They tend to struggle with scalability, content moderation, and trolling – the same problems that can be seen everywhere in the world.

One potential vision for the future can be seen already in Taiwan. Small and relatively isolated on the world stage, Taiwan has been praised for its coronavirus response, which has seen just 27 deaths and no lockdowns or community transmission. This extraordinary success, one of the best in the world, has been attributed to Taiwan’s experience during SaRS in 2003, or its relative isolation, but that isn’t the real story. Without the level of digital infrastructure already in place, this level of success would not have been possible.

Taiwan’s broader digital strategy offers lessons for the UK in civic participation. Audrey Tang, Taiwan’s first ever digital minister, was originally part of a group called g0v (pronounced ‘gov zero’) which takes a participatory approach to citizenship, encouraging its members to think about and work on potential improvements on existing government systems. Following the 2014 Sunflower Movement, one of the hackers, Jaclyn Tsai, asked the group how they could contribute to government processes and invited them to be involved in designing better systems. In 2016, vTaiwan was born, an online consultation process where citizens can discuss contentious issues in law-making. The platform used for consultations is called Pol.is. Rather than promoting divisive and inflammatory content, the algorithm prioritises statements with which the majority agree, highlighting previously unknown areas of agreement between conflicting stakeholders, which can improve civic participation and build consensus. The software also displays each conversation as a clustered network of individuals, showing the relative positions of individuals and groups in each debate.

There are limitations to the Taiwanese model, of course. It has been used successfully to discuss issues such as Uber regulations and drunk driving penalties, but has so far mostly focused only on issues in technology. Furthermore, even in Taiwan where 92.78% of people have Internet access, on par with the UK, the focus on online discourse still excludes people, especially from hard-to-reach groups, which is precisely the point of civic tech. Finally, the government is under no obligation to act on the conclusions reached through consultation. However, it is still a hugely promising model.

If this method of public consultation was implemented in the UK, it could provide a place of real discussion, at a time where we instinctively want to work together. Pol.is, has been used in small trials in the UK to measure consensus. The largest, a trial of 5,000 people, revealed that 87% of the public agree with the harsh coronavirus restrictions at time of writing, despite being mentally and physically taxing, and that the public believe that safe, fair working conditions for NHS staff are more important than decreasing wait times – both insights that go against not only the headlines but the actions and rhetoric of our elected representatives.

More of this kind of consensus building is desperately needed in the UK as soon as possible. Polling in the UK suggests we are just as divided on Brexit as we were five years ago. Inequality has risen. It feels like we are deeply divided against each other, and that there is little desire to improve society. If we had a sense that agreement was more productive than disagreement, it could help build our sense of community, so that our vision for the future can include everyone. 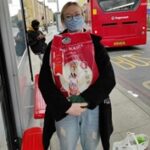 Ruth Wetters is studying for an MSc in Data Science at City, University of London. She graduated from the BA in Chinese (Modern & Classical) at SOAS in 2020. She is currently interested in civic tech, AI and environmental engineering.