In the early 1980s the UK embassy in Beijing used to put on an internal Christmas pantomime.  In one scene a Chinese minister gave a speech in English which was interpreted – in English. The minister spoke in cliches, while the ‘interpreter’ voiced his real meaning. The laugh was in the contrast. For those of us who regularly sit through speeches of Chinese ministers, relieving the tedium by indulging in unvoiced ‘simultaneous interpretation’ is a common pastime. Listening to Xi at Davos, I indulged.

Xi’s speech has the normal quota of lead-footed, tin-eared, silver(plate)-tongued rhetorical flourishes. We can bear with those. But where does contradiction between oratory and reality career into hypocrisy?

Dividing the speech into the good, the bad and the ugly risks an accusation of cynicism. After all, as the American mathematician, singer and philosopher Tom Lehrer noted, we are all in favour of “peace and justice and brotherhood”. But what hits you about this speech is that gap between rhetoric and reality. Still, who is being cynical? Is it I or is it Xi?  You judge.

Who could quarrel with sentiments such as the need to “close the divide between developed and developing countries and jointly bring about growth and prosperity for all”? Or together to face global challenges such as public health and climate change? We do indeed need to “to reform and improve the global governance system on the basis of extensive consultation and consensus-building”, “build an open world economy, uphold the multilateral trading regime, discard discriminatory and exclusionary standards, rules and systems, and take down barriers to trade, investment and technological exchanges”. On the surface there is plenty to agree with. But marine life is lived in the deep waters, not on the surface.

Chinese is a witty language. The ‘xiehouyu’ (歇后语) is a two-part statement of which the second half is not spoken, because just by saying the first innocent-sounding half everyone knows the undermining and unsaid put-down. This came to mind when Xi talked of closing “the divide between developed and developing countries…” Well, guess what? The CCP insists that China, the world’s second biggest economy, is still a developing country. So agree to the Xi sentiment and follow the logic by allowing China special treatment is the corollary.

Or take this: “Each country is unique with its own history, culture and social system, and none is superior to the other.” The unspoken second half is to recall Xi’s first speech to the Politburo in 2013: “Most importantly, we must concentrate our efforts on ….. building a socialism that is superior to capitalism, and laying the foundation for a future where we will win the initiative and have the superior position.” Meanwhile claims of the superiority of CCP governance compared to western democracy are ubiquitous.

Who could object to “building an open world economy, upholding the multilateral trading regime, discarding discriminatory and exclusionary standards, rules and systems, and taking down barriers to trade, investment and technological exchanges.” But who can forget the unspoken part – at least not mentioned at Davos, even if frequent in internal speeches: “.. we need to reshape our industrial chains by stepping up technological innovation and import substitution across the board….. China must be basically self-sufficient in food production and industrial development. We must never forget this.” (Xi Jinping at the 7th meeting of the Central Financial and Economic Commission on 10 April 2020.) Not just excerpts from speeches, but the whole thrust of the Dual Circulation policy and the echoes of Mao’s self-sufficiency (自力更生) point towards divergence, if not decoupling.

Meanwhile some parts are just autopilot oratory, full of sound and sense, but signifying nothing: “We should reject the outdated Cold War and zero-sum game mentality, adhere to mutual respect and accommodation, and enhance political trust through strategic communication.” Er, of course, Mr. Xi.

It is hardly necessary to comment. And difficult not to see red.

-“To build small circles or start a new Cold War, to reject, threaten or intimidate others [‘wolf warrior diplomacy’], to wilfully impose decoupling [see above], supply disruption or sanctions [Norway, South Korea, Canada, Australia trade], and to create isolation or estrangement [Taiwan] will only push the world into division and even confrontation.”

And some of the hypocrisy is brain-numbing:

“There will be no human civilization without diversity, and such diversity will continue to exist for as long as we can imagine. Difference in itself is no cause for alarm. What does ring the alarm is arrogance, prejudice and hatred; it is the attempt to impose hierarchy on human civilization or to force one’s own history, culture and social system upon others.” Agreed. But tell that to the Uyghurs.

“The strong should not bully the weak. Decision should not be made by simply showing off strong muscles or waving a big fist. …..and rules, once made, should be followed by all.” “Resolve disagreements through consultation and dialogue.” This from the mouth of the leader of a government which will not even return the calls of Australian ministers, who are trying to ‘resolve disagreements’.

“We need to give full play to the role of the World Health Organization in building a global community of health for all.” [So will you stop blocking Taiwan’s membership of the WHO?].

How will people react to Xi’s speech?

Self-serving lackeys will trumpet it as ‘historic’, the description of Davos’ guardian Klaus Scwab himself.

There will be applause from some businessmen and others such as the doyens of the retired and redundant politicians’ club, hoping for post-inoculation ego-stoking invitations to Beijing.

The naïve, clutching at driftwood in stormy seas and hoping to avoid the depths of decoupling or divergence, will wistfully hope that the CCP is as Xi portrays.

The sensible will see the speech as confirmation of the need to be less trusting of the CCP, in Gramsci’s words to exercise “pessimism of the intellect, optimism of the will.

And we ‘China watchers’ will see it as more platitudinous propaganda, laced with rank hypocrisy, a cynical attempt to occlude the truth. Xi wants to see a future of what the Central Propaganda Department has called a ‘China solution’, a horrible echo on this, the Holocaust Memorial Day, since it brings to mind Xinjiang. His speech mentions three times “building a community with a shared future for mankind”. The trouble is that we are now aware of what that means, and it is a future which we don’t want to share.

Perhaps Xi does not care about the reception of his speech. Like the counterproductive external Covid propaganda campaign, it nevertheless plays well within China, where the leader bestriding a ragged world stage is a fine contrast to the ‘century of humiliation’. Maybe, but an increasing gap between rhetoric and reality destroys trust. That aids decoupling and is dangerous.

This essay may be an exercise in interpreting ‘what the minister says’ as an aid to relieving its tedium. But somehow the fun has gone. This is not pantomime; it is serious drama. 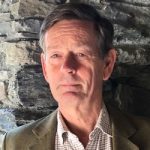 Charlie Parton spent 22 years of his 37 year diplomatic career working in or on China, Hong Kong and Taiwan. In his final posting he was First Counsellor in the EU delegation in Beijing until late 2016. His focus is on Chinese politics and internal developments, and how those might affect UK interests. In 2017 he set up his own consultancy, China Ink, and was chosen as the UK Parliament’s Foreign Affairs Committee Special Adviser on China. He is a Senior Associate Fellow at RUSI.