Soundscapes of Uyghur Islam began its life in 2009 as I sat in a room in a small Uyghur village in southern Xinjiang along with sixty women who were reciting the Qur’an and weeping. It formed around my journey to understand why they were weeping, and how that relates to the big issues in the region’s politics, primarily religious revival and state violence.

Rural Uyghur women are among the most marginalized sectors of Uyghur (and indeed Chinese) society, distanced from power in terms of religious and political institutions, least able to speak within the parameters of mainstream discourse. The ways in which they do speak are easily dismissed by elites as ignorant, superstitious, and backward. In this book, I argue that in order to understand their lived experience we need to shift our focus to embodiment, affect, and other means of influencing society. My aim is to illustrate how this kind of focus can help us understand the ongoing struggle for absolute control over the territory of Xinjiang / East Turkistan and the bodies of its citizens.

The book’s main focus is the religious revival which spread through Uyghur communities in Xinjiang and in the Central Asian diaspora in the late 20th and early 21st centuries, as new religious ideologies and practices arrived via the Internet, and through increased travel and migration. These new forms of piety quickly acquired a political dimension: some have read them as a response to problems of marginalization and social disintegration, and they figure prominently in Chinese official discourse as evidence of extremism and terrorism. As my research developed, these women sitting in that room became caught up in a downward spiral of violence and securitization, and subsequently the policies of mass internment and cultural erasure that are still devastating the region today.

The book focuses on sound as a way to understand these developments. As I listened to many Uyghurs talking about how they rediscovered their faith, I found that many of the debates and arguments around how to be a good Uyghur Muslim were centred on sound, bodily practices, and musicality: should you have music and dancing at weddings; should the recited Qur’an sound like singing? I show how a focus on sound and ways of listening, on embodiment and practice can cut through debates about ideology and provide new ways of understanding religion and politics. This is important work in the fraught sphere of the discourse surrounding Islamic revivals, where dominant narratives privilege the visual in ways that routinely stereotype and demonize Muslim subjects.

The first two chapters focus on a village in southern Xinjiang that I’ve called Yantaq, and the women who meet weekly to perform khetme: a type of sama’ gathering based on Central Asian Sufi traditions. I discuss the powerful outpouring of emotion that their practice provokes, and I link the women’s discussions of their own practice to philosophical traditions of Sufism. I introduce hikmet: affective, sung Turkic language meditations on death and judgment attributed to the medieval Sufi saint Khoja Ahmed Yasawi, and look at the ways that this tradition of sung poetry links the women to traditions of Sufism that traverse the Turkic world.

Sara Ahmed has argued that the objects of emotion take shape as the effects of circulation. As sites of personal and social tension, these objects become sticky or saturated with affect. I became interested in how the emotions that feature in local traditions of religious practice are taken up and revitalized through engagement with contemporary flows of aesthetics and ideology. Certain named emotions, which are central to Central Asian literary traditions of Islam and which also permeate contemporary Uyghur culture, appear as recurring themes in this book, notably the twin themes of ishq (divine love, passion), and dard (suffering).

Chapters Three and Four focus on the ways in which Uyghurs experienced and reproduced globalized forms of Islamic media in the period before the crackdown. Central to this are practices of listening to, and reciting the Qur’an. I interviewed pious Uyghurs in Kazakhstan, Kyrgyzstan and Xinjiang, who filled their personal soundscapes with the mediated sounds of recitation from Egypt and Saudi Arabia. One of my key arguments in the book – drawing on the work of Saba Mahmood and Charles Hirschkind – is that the new forms of embodied and listening practices ushered in by the Islamic revival in Xinjiang reframe the landscape in ways that are deeply antithetical to the state development project, and hence a contesting of state power.

Chapter Five moves into a more contested sphere: the circulation of sermons, horror film sound effects and anashid via social media platforms. The circulation of these sounds provides insights into the global-local dynamics of religious ideologies and practices, their changing meanings as they entered new contexts, their affective impact, and their power to persuade and transform. Central to my discussion of these issues is the ‘snake-monkey-woman,’ a bizarre Internet meme which circulated Uyghur social media in 2012, terrifying children and provoking all sorts of debates about faith and identity.

By the 1990s China’s state media was frequently highlighting concerns about the influence of Islamic media imported from outside Xinjiang, and the authorities made extensive efforts to control its circulation. They were portrayed as dangerous polluting influences, ones that purveyed religious extremism, damaged inter-ethnic harmony and promoted terrorism. But such generalizations are implausible; mediated flows of religious experience and knowledge often follow surprising paths.

Just as commentators feared that the rapid postwar expansion of popular music threatened a “cultural greyout” and the collapse of distinct music cultures into a homogenous global mass, so contemporary observers fear the spread of global Islamic radicalism and the destruction of local religious traditions. In fact, in the case of popular music the opposite has occurred. Today, globally circulating popular music is integral to contemporary senses of place and identity, serving to remediate local identity in all its myriad forms. In the same way, I argue, globally circulating religious media come into dialogue with local embodied practices, and are synthesized to create new forms of practice which facilitate powerful affective experiences of faith and remediate local religious identities.

Finally I look at the use of song-and-dance in the “anti-religious extremism” campaign in Xinjiang, focusing on the coerced singing and dancing that broke out all over the region in 2014 and 2015. I argue that these campaigns drew on mobilization techniques developed in the Chinese Cultural Revolution, and they aimed to change norms of bodily behaviour, disciplining and transforming Muslim bodies. From 2017, these techniques have been taken to new extremes with the use of daily singing revolutionary songs in the internment camps. When situated alongside the brutality of the camps this is clearly music being used as a form of torture, and I draw parallels with the use of music in US detention camps in Guantanamo and Abu Ghraib.

After Xi Jinping called for walls of steel and nets of iron to be erected around Xinjiang in 2015, I was completely cut off from the village and the women whose stories I tell in this book. I have to assume that many of them have spent time undergoing “re-education” in the mass internment camps that sprang up in 2017, and it is likely that they are now working in conditions of forced labour in the factories built next to the camps. The research from which this book arises, comes out of a bigger Leverhulme research project, ‘Sounding Islam in China.’ One of our project partners was Rahile Dawut, former Professor of Folklore at Xinjiang University. She was detained without charge in 2017, and remains in an internment camp at the time of writing in spite of our active campaigns for her release. The book is dedicated to her. 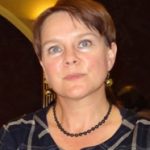 Rachel Harris is Director of Research, School of Arts, and Professor in Ethnomusicology, Department of Music, at SOAS University of London.

Her book, Soundscapes of Uyghur Islam (Indiana University Press) was published in November 2020.